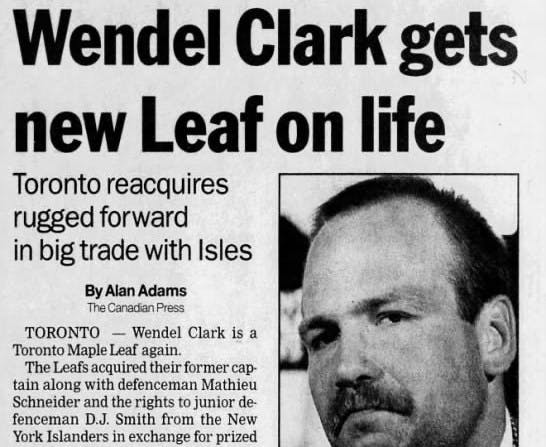 By Zach Laing
1 year ago
Welcome back to another edition of Throwback Thursday!
This week in 1996, the Toronto Maple Leafs acquired Wendel Clark making his triumphant return to Toronto.
On March 13, the Leafs acquired Clark along with Mathieu Schneider and D.J. Smith, while Toronto gave up Sean Haggerty, Darby Hendrickson, Kenny Jonsson and a 1997 1st round pick (Roberto Luongo).
The Leafs also acquired a 1996 2nd round pick on that day, shipping Dave Andreychuk to the New Jersey Devils.
He scored a goal and an assist in his first game back two days later in a 3-0 win.
Clark’s return came after he spent parts of two seasons with the Quebec Nordiques and the New York Islanders, and saw him come back for parts of three seasons. Between 1995 and 1998, Clark scored 83 points in 125 games with the Leafs.
In ’98, Clark left via free agency to join the Tampa Bay Lightning, before ultimately returning for a final season in 1999-2000 before he retired.
Zach Laing is the Nation Network’s news director and senior columnist. He can be followed on Twitter at @zjlaing, or reached by email at zach@oilersnation.com.
Uncategorized
Recent articles from Zach Laing