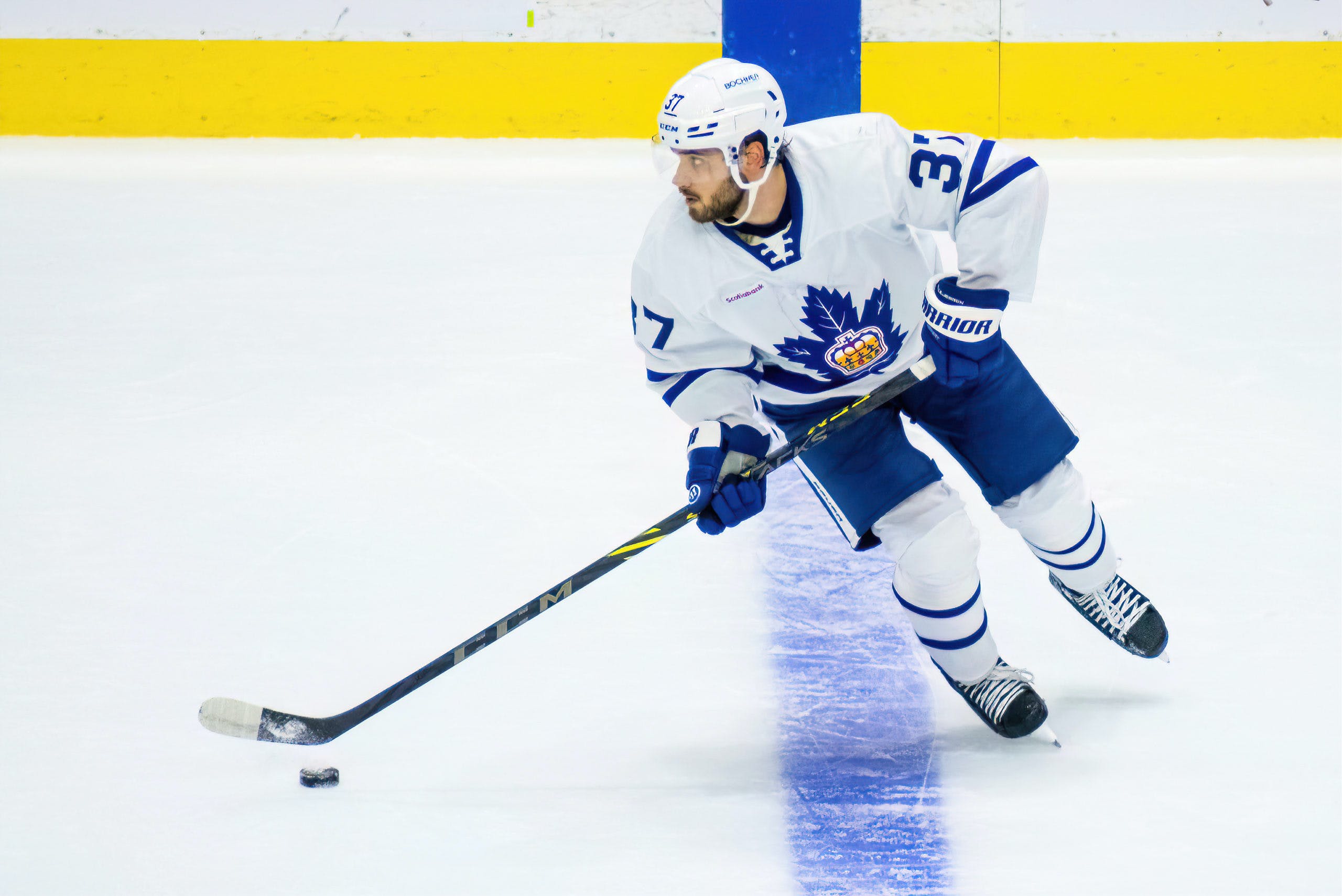 By Nick Barden
1 month ago
Return of the Mack? No, it’s the return of Jordie Benn and Timothy Liljegren.
The two players joined the Toronto Marlies on a conditioning stint earlier this week, ramping up their play so they can return to the Maple Leafs lineup. And in their first AHL game, well, it looked like they haven’t lost a step, even with missing a bunch of time.
Liljegren was entering the Marlies lineup for the first time since he was with the team back in May of 2021. Benn, on the other hand, hadn’t played a game in the American League since May of 2013, where he was with the Texas Stars on their quest for the Calder Cup.
On Tuesday, at Marlies practice, the two of Benn and Liljegren skated together as a pairing. However, that changed on Wednesday night as Liljegren was paired with NHL veteran, Danny DeKeyser, while Benn was placed alongside AHL-rookie, and potential diamond in the rough, Marshall Rifai.
A great top four where you have two younger defencemen paired alongside guys who’ve played over 500 games in the NHL.
You’d think there would be some rust to shake off since neither one of Benn or Liljegren has played in a regular season game this year. But nope, both players seemed to be running like well-oiled machines.
At some points during the Marlies 5-3 win over the Syracuse Crunch, it felt like Liljegren was coming on every second shift. The AHL unfortunately doesn’t release their ice-time, but I would be very interested to see how much he played on Wednesday night.
Liljegren looked as confident as ever in the AHL — making complete passes, getting the puck up the ice, and even using his world-class skating in the offensive zone. He showcased that best when he assisted on DeKeyser’s first goal as a Marlie.
This was something he did aplenty in the AHL before eventually becoming a full-time defenceman with the Maple Leafs.
Liljegren played in all situations for Toronto on Wednesday night, and it’s safe to say that’ll be a continued trend until he returns to the NHL.
“I thought (Liljegren) looked really good,” said Marlies head coach Greg Moore after Wednesday night’s game. “Obviously, he’s coming back from injury, and he hasn’t played in a while. He looked very comfortable, very calm, was skating very well. His defence through the middle of the rink is one of the best I’ve ever seen.”
The 23-year-old wasn’t afraid to use his body either.
We don’t really see this type of play much with Liljegren, but when a player is confident, they can bring a lot of different assets to the table.
When assessing Benn’s first game with the Marlies, there weren’t many flashy plays compared to his counterpart. It’s worth noting, though, that the 35-year-old is a more rugged defenceman, so there wasn’t going to be many plays that made your head tilt.
He plays a mean game, similar to that of Jake Muzzin. Benn is a decent puck mover, too.
The 35-year-old played most of the game for Toronto at five-on-five, while also getting time on the Marlies’ penalty kill. The team was shorthanded three times on Wednesday, one of which was while Benn was in the box.
But when he did get the chance to kill a penalty, he was laying his body on the line. Even when he’s just down in the AHL on a conditioning stint.
“What’s even more impressive is you these guys that have NHL experience, coming down to our league and fitting in and being a part of the team, sacrificing, blocking shots, and doing a lot of little things to help win a game.” Moore said on Wednesday. “They weren’t here just coasting by and just wanting to get through it. They were a part of the group and did some really special stuff.”
The two NHL-calibre defencemen have already brought a fair amount to this Marlies team. We’ll see if that trend continues in the other games that they get into while down in the AHL on conditioning stints.
Editorials
Recent articles from Nick Barden