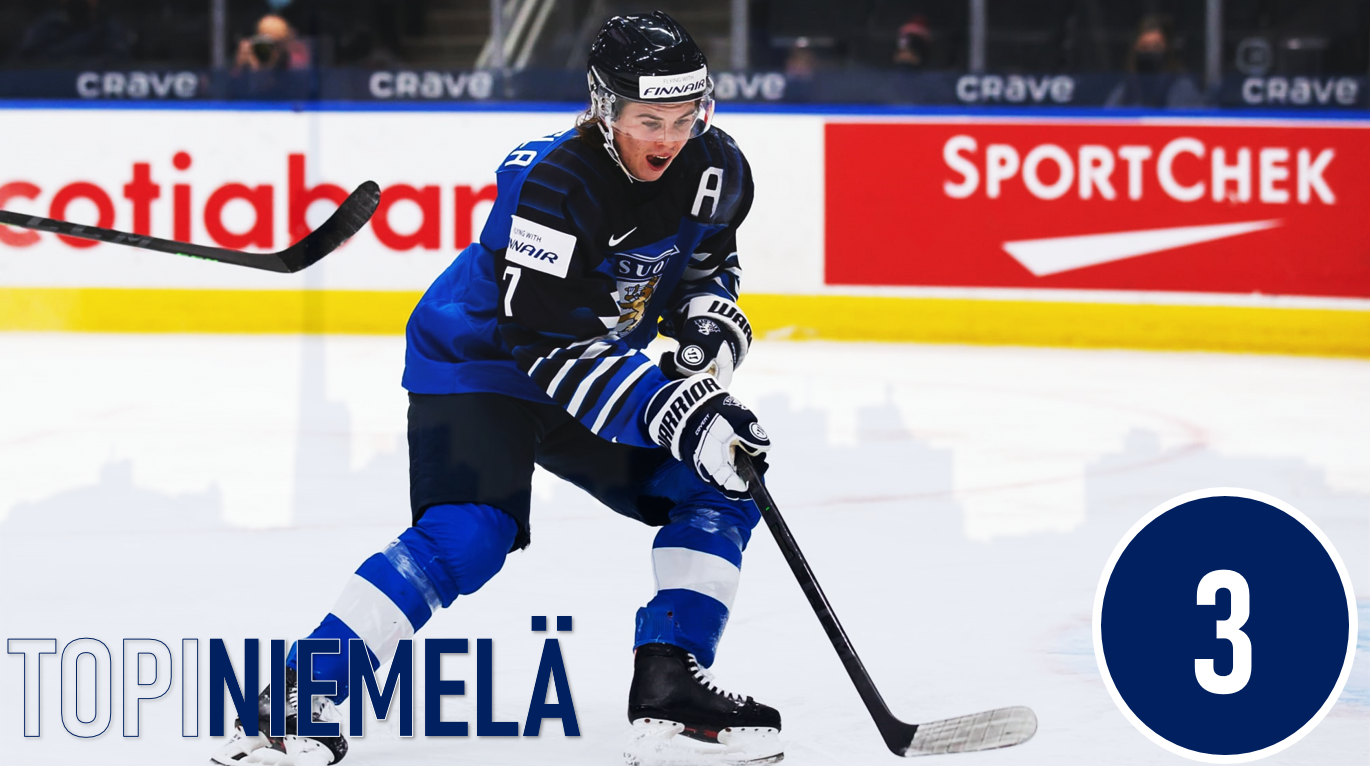 By Nick Richard
3 months ago
Topi Niemelä has been on a steady climb towards the top of the Leafs’ prospect pool ever since he was selected in the third round of the 2020 NHL Draft.
When he was drafted, he profiled as a modern-day defensive defenseman and the organization raved about his off-puck instincts. In the two seasons since then, Niemelä’s offensive game has progressed in a big way and he is now considered among the best young blueliners playing outside the NHL.
His coming out party was the 2021 World Junior Championships, where he tallied eight points in seven games on his way to being named the tournament’s top defenseman, and he has only continued to build off of that performance. He is currently representing Finland once again at the World Juniors reboot in Alberta and, as of this writing, has four assists through four games.
Climbing two spots from number five on last summer’s list, Niemelä is now the top-ranked defensive prospect in the Leafs’ system after Rasmus Sandin and Timothy Liljegren both graduated to the NHL full-time last season.

D | Kärpät (Liiga) | Age: 20 | 5-foot-11 | 170 lbs | Shoots: R
Acquired: 2020 3rd Round, 64th Overall | 2021 Ranking: 5
Niemelä had a massively productive 2021-22 season. In fact, his 32 points were the most ever by a U20 defenseman in Liiga. Overall, his 10 goals were the fifth most in the entire league among defensemen, and he finished with the eighth highest point total as well. He played fewer games than everyone who finished ahead of him, however, and his mark of .67 points per game was the second best among all Liiga blueliners who played more than 10 games.
Niemelä graded out near the top of the league in just about every offensive category in 2021-22, and he was particularly impactful at even strength. Of the 32 points he recorded on the season, 20 of them came at even strength, including nine goals. He wasn’t simply racking up secondary assists either and was directly involved in creating a lot of offense for his team, with 22 of his points being either a goal or first assist.
He took on a sizeable workload for such a young player, and though his goals against numbers were slightly below average relative to both his teammates and the rest of the league, his ability to drive offense from the backend still helped him finish near the top of the league in relative goals for percentage.
Some shooting regression should be expected moving forward, but Niemelä does such a good job of finding quality looks and his shot is good enough that his goal scoring from the back end should be somewhat sustainable.