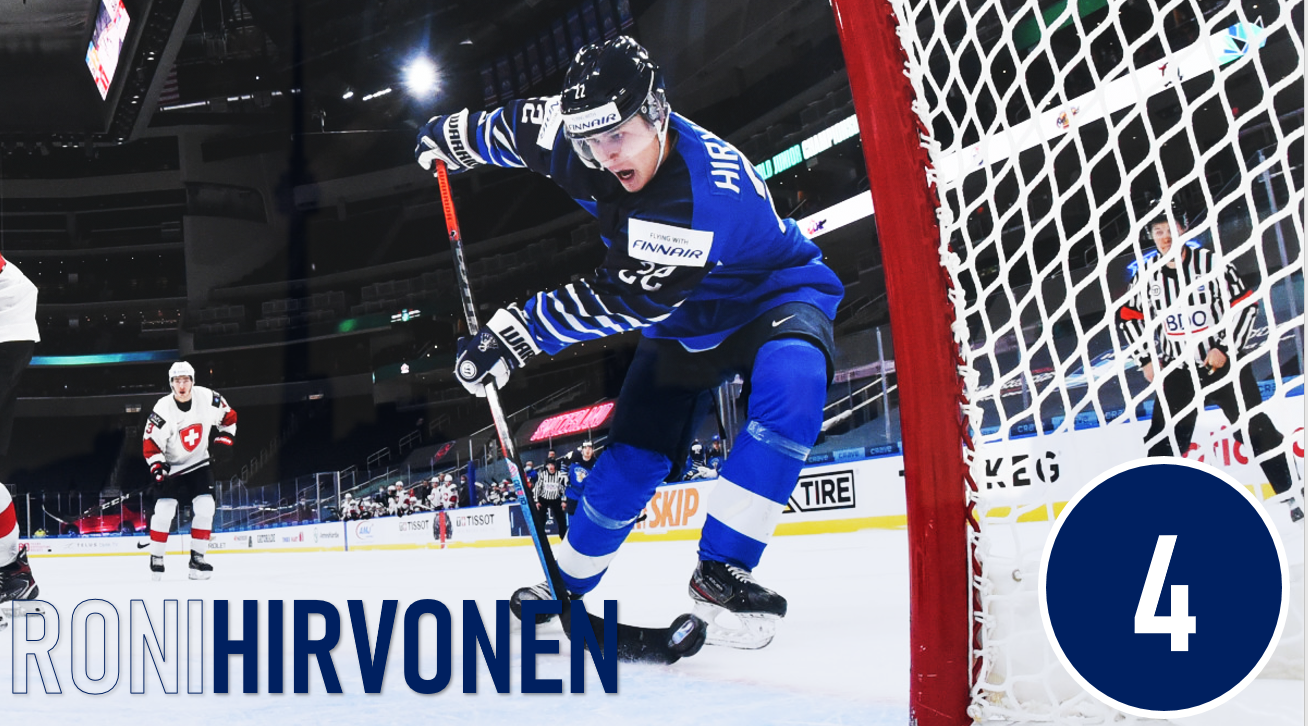 By Kyle Cushman
5 months ago
@Roni Hirvonen is just 20 years old, he’s currently starring for Team Finland at the World Juniors, and yet he already has three seasons of professional hockey under his belt. Maturity has been the name of the game for Hirvonen since his draft year and is a major reason why he became a Liiga regular at just 17 years old.
Coming into the 2021-22 season, Hirvonen was looking to take the next step as a player. While he showed flashes in his DY+1 campaign, particularly at the 2021 World Juniors, he failed to take a notable step offensively and had somewhat stagnated in the Ässät system.
A move to HIFK and a full-time shift to the left wing was just what Roni Hirvonen needed to spark that uptick in performance, bumping him up two spots on the TLN Prospect Rankings and reinforcing the middle-six potential that made him a second-round pick in 2020.

LW | HIFK (Liiga) | Age: 20 | 5-foot-9 | 172 lbs | Shoots: L
Acquired: 2020 Draft, 59th Overall | 2021 Ranking: #6
While beginning his Liiga career with Ässät was a benefit given the ice-time and opportunity to play at the professional level, it showed its negatives in Roni Hirvonen’s DY+1 season. Playing on a team that finished fourth from the bottom of the Liiga standings, Hirvonen was playing regular minutes…but wasn’t getting much help. He finished fifth in team scoring despite only 21 points in 54 games.
Hirvonen landed with HIFK, one of the top teams in Finland that was coming off of a second-place finish in the regular season and a trip to the semi-finals. This move allowed Hirvonen to play on a deeper team with better teammates, even if it sacrificed a couple of minutes of time-on-ice per game.
The transfer proved fruitful, as Hirvonen saw his rate of production and on-ice impacts greatly increase from his time with Ässät. Hirvonen scored nine goals and 26 points in 46 regular season games, adding another three goals and six points in an impressive five-game showing in the postseason that would’ve been even better had he not been injured.

Statistically, Hirvonen is a big breakout candidate heading into next season. He is already one of the better playmakers in Liiga relative to his ice-time, consistently improving on that front year over year.
Where he really stands out is in his individual shot generation. Hirvonen peppered goaltenders with 9.5 shots per 60, ranking sixth in Finland in that category. Despite this significant amount of shot volume, Hirvonen scored just nine goals in the regular season, an 8.65 per cent conversion rate.

With a swing his way in terms of shooting luck and consistent form as a playmaker, Hirvonen is in store for a big year with HIFK.
As always, context is key. Hirvonen’s 32 points in 51 total games in Liiga pale in comparison to the numbers put up by prospects playing at junior levels due to the level of competition he is playing at. So how does he fair relative to his peers? This is where it gets interesting.
The list of top DY+2 scorers (regular season plus playoffs) in Liiga over the past decade is a mixed bag. You have names like @Mikael Granlund and @Teuvo Teravainen at the top…but then an underwhelming group following.