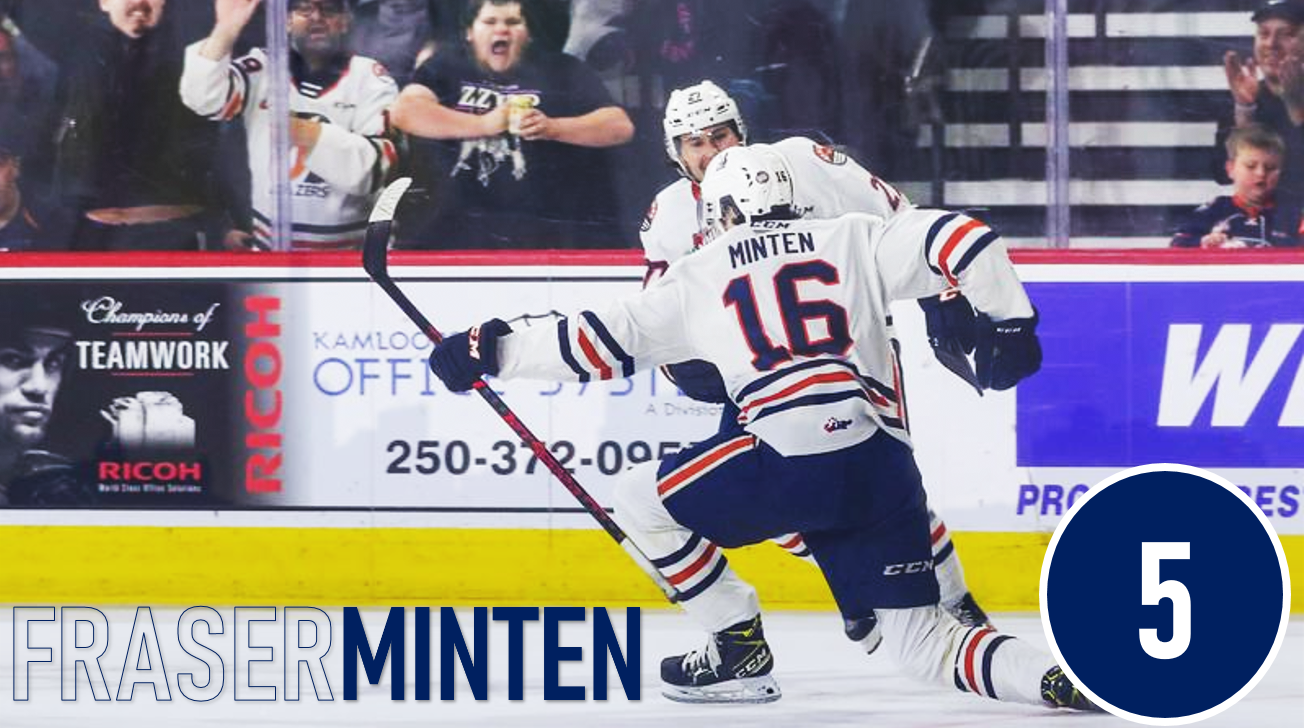 By Nick Richard
3 months ago
Ahead of the draft, I was of the belief that the Leafs should be targeting more NHL projectability with their early picks rather than just swinging on higher upside prospects who provided less certainty in their overall projections. Last year’s selection of Matt Knies in the second round – a player with a relatively safe floor who still possessed some offensive upside – was a step in that direction, and the early returns have certainly exceeded expectations.
The Leafs went in a similar direction with their first pick of the 2022 draft after trading out of the first round, and while it was a bit of a reach in relation to most public draft rankings, the selection of Fraser Minten at 38th overall also offered an intriguing balance of potential and projectability.
One of the youngest players in the draft, Minten was a bit of a late riser in the lead-up to the draft, at least in terms of the buzz surrounding his name. Still, he went off the board much earlier than many were expecting, and the Leafs stood pat to select him rather than taking the chance and trading down again, illustrating the organization’s belief in the player.
Given Minten’s age, his already solid base of skills, and the fact that he has only been playing high-level hockey for a relatively short time, Kyle Dubas and the rest of the Leafs’ front office believe there is plenty of untapped potential in their 2022 second-rounder. Making his TLN Prospect Rankings debut at #5, Minten will be looking to reward that faith and propel his way up the organizational depth chart.

C | Kamloops (WHL) | Age: 18 | 6-foot-1 | 185 lbs | Shoots: L
Acquired: 2022 2nd Round, 38th Overall | 2021 Ranking: N/A
Minten actually bears a few similarities to Knies. Both players were considered to be “safe” picks due in large part to their physical tools, and both players also had strong second halves after slower starts to their respective draft years.
Minten finished the 2021-22 regular season with 20 goals and 35 assists for 55 points in 67 games – respectable numbers but not eye-popping. Breaking down his season, however, you can see that he really turned it on and elevated his game down the stretch. He played at a point per game pace in the final 25 games of the regular season, notching nine goals and 16 assists, and carried his strong play into the postseason, where he added six goals and 10 assists in 17 games to help lead Kamloops on a deep playoff run.
As a younger player on one of the WHL’s best teams, Minten still managed to carve out a prominent role as the season wore on, and he was able to post positive goal share numbers, even relative to his teammates. Part of that is due to his solid two-way game but the numbers show that Minten was one of the league’s better creators, ranking in the 89th percentile in even strength assists per estimated 60 minutes of ice time. It is worth noting, however, that he picked up more than a few assists from low-percentage shots that found their way onto a teammate’s stick around the net.
Minten generates shots at a high rate but is sometimes prone to settling for shots from low-danger areas, evidenced at least partially by his below-average shooting percentage.

“In terms of his shot generation, Minten’s 13.6 shots per estimated 60 ranked top 20 in the WHL among forwards. What is especially notable about this is that of that group of 20, Minten had the lowest shooting percentage, down at 9.4 per cent.
The average shooting percentage of the top 20, excluding Minten, was 14.2 per cent. Had he scored at that rate, that would have added another 10 goals to his season total of 20.”
–  Kyle Cushman

He was much more dangerous on the powerplay, however, and was among the best in the WHL at converting with the man advantage. He has a quality release, and when he has more time and space to let it go from dangerous areas, he can be a real weapon.
Despite his seemingly pedestrian numbers, a deeper look at Minten’s statistical profile lends credence to the idea that he was worthy of the swing the Leafs took on him in the second round. He generates a lot of offensive opportunities and there is probably some positive regression coming in the form of his shooting percentage, and over 85% of his 35 even strength points were of the primary variety (a goal or first assist). Combine that with his strong defensive game, leadership qualities, and willingness to play a physical brand of hockey, and you can start to see why the Leafs are so high on him.