TLN Prospect #6: Alex Steeves’ next step is a spot in the Maple Leafs lineup 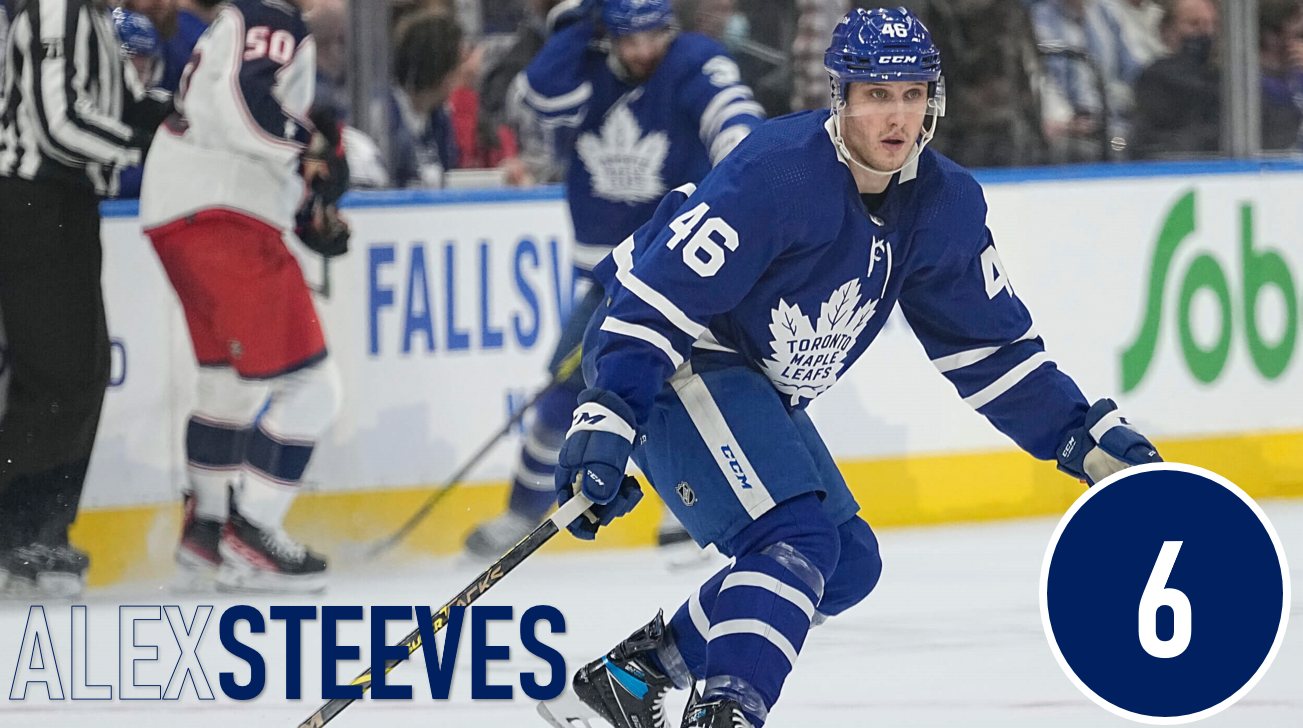 By Nick Barden
3 months ago
Alex Steeves only wanted to do one thing when he entered the Maple Leafs organization last year, and that was dominate.
It was like the 22-year-old was shot out of a cannon when he made his professional hockey debut with the Marlies. He was coming off an injury in the prospect tournament a month earlier, but you couldn’t even tell with the way he was playing.
Through his first 13 games, Steeves scored 14 points — a sign that he was someone that not many could handle at that moment.

LW/RW | Toronto (AHL) | Age: 22 | 5-foot-11 | 185 lbs | Shoots: L
Acquired: UDFA Signing, 03/28/21 | 2021 Ranking: N/A
The 22-year-old eventually dropped down to earth, finishing off his first pro season with 46 points in 58 games. A great total at that but what was more spectacular was the fact that he tied the old Marlies rookie goal record of 23 goals.
Another rookie in Bobby McMann scored one more goal and etched his name in the record books, but Steeves’ total shouldn’t be understated either.
When looking at him as a prospect, there’s a lot of excitement around the player he could pan out to be. By this time next year, the 22-year-old might not even be recognized as a prospect anymore.
Similar to Pontus Holmberg, Nick Robertson, and Bobby McMann, Steeves is one of the players who could make the jump to the NHL next season. Maple Leafs GM Kyle Dubas specified at the end of this past year that he wanted these prospects to push for a spot.
I wouldn’t put it past Steeves to have a big off-season and steal an NHL roster spot this fall either.
When looking at the 22-year-old’s game, there doesn’t seem to be many flaws. He’s a great skater, has incredible speed, and a lethal shot. His shot might just be the strongest attribute of all, though.
Steeves’ release is incredibly quick and he’s usually able to get the puck off his stick as fast as it gets onto it. As you can see with the clip above, he’s able to caress the puck and then fire it off in almost an instant.
With the rate of speed that it’s travelling, plus the accuracy of the shot, Steeves is able to score an important goal and tie the game for Toronto. It’s not just his wrist-shot that’s strong, though. The 22-year-old has a multi-faceted shot, meaning he has the ability to use it in different ways when needed.
Throughout the entire season, Steeves was always finishing off practices with slapshots, and that part of his game improved drastically. He used it plenty while on the Marlies’ top power play unit.
Adding that type of shot to his game will be very valuable with both the Marlies and the Maple Leafs, if he gets there. Being on the power play, Steeves could rack up goals from just firing off one-timers from that spot. The Maple Leafs could use him as a PP2 option and he might fit well there.
However, the 22-year-old doesn’t just thrive while playing on the power play. Only 17 of his 46 points with the Marlies came on the man advantage and that’s not to forget he played on the penalty kill too.
Steeves is an incredible run and gun player. He will burn you if you make a mistake, and in fact, he did that plenty of times last season. Part of that is why he’s such a great fit while the team is shorthanded.
Although this isn’t on the penalty kill, you can clearly see in the clip above how Steeves can cut off passes and take them the other way for scoring chances. And once he’s gone with the puck, there’s no catching up to him.
The 22-year-old also uses his speed on the back-check too, which makes him a very valuable two-way player.
When Steeves isn’t using his speed, he can be seen using his strong hockey IQ. There have been plenty of instances throughout the year where he puts himself in the right position to put pucks into the back of the opposition’s net.
If he’s not using his shot, he’s getting in front of the net. If he’s got the puck and he can’t use his speed to get around a defender, he’ll use his slick hands. There are a lot of important attributes that the 22-year-old carries, making him a valuable player to the Maple Leafs’ future.
Putting all of those skillsets together allows him to stand out on the ice, but wait until I tell you there’s more. Let’s just say, it’s the other side of his game.
It was incredibly clear early on that Steeves was a team player. Whether it was blocking shots or throwing his body around — the 22-year-old made sure he was doing it against whichever opponent Toronto was facing.
Steeves is willing to do just about anything for his team — even fight.
When looking at the 22-year-old as a whole, there’s nothing dislike about the player. I often find it difficult to even find one problem with his game. He plays hard, he scores goals, he’s great at both ends of the rink, and he’s incredibly consistent.
The most he’s went without registering a point was three games and that was smack dab in the middle of his first AHL season.
Now, it’s time for Steeves to try and take the next step, and make it into the NHL lineup full time. If we’re looking for where he might end up, I’d be pretty certain to say it’d be on the Maple Leafs’ fourth line.
Robertson is obviously ahead of him in the depth chart and will likely get the first crack within the top six (if he’s placed there in training camp). But I believe if there’s somehow an opening for Steeves to get that far up the lineup, he’ll show what he’s capable of.
Again, though, that’s a big if.
Steeves’ best bet at the moment is to enter Maple Leafs training camp with the same confidence he had when he began his first pro season. If that’s there come September, well, anything is possible.
More from TheLeafsNation.com