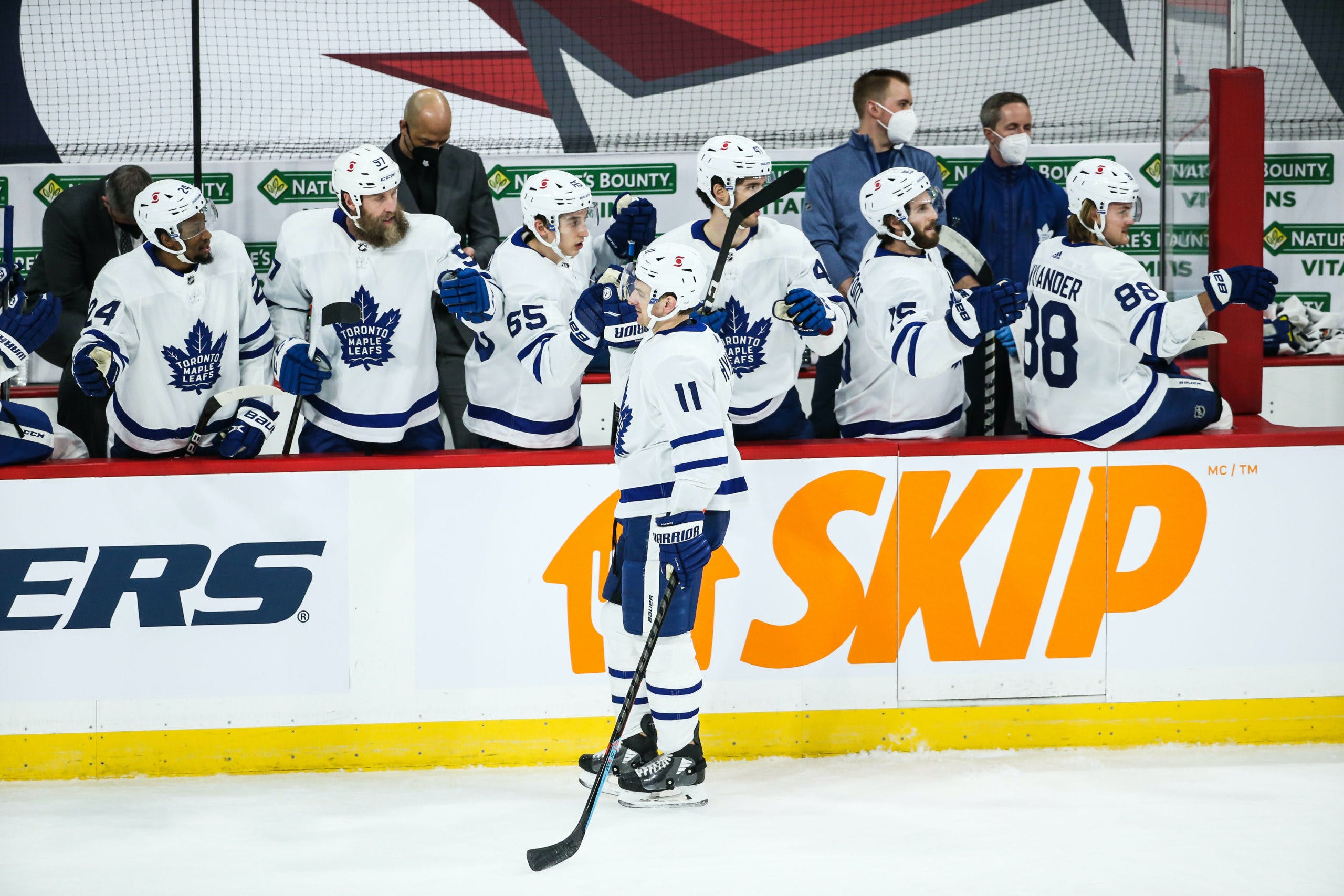 By Roxanne Khasow
1 year ago
Coming off a tough OT loss to the Edmonton Oilers, and battling for the top spot of the Scotia North Division, the Toronto Maple Leafs were looking to get back in action as the puck dropped against the Winnipeg Jets for tonight’s game. The Leafs came in hot and heavy as they ended the first period with lots of good chances, outshooting the Jets 14-6, and a 2-0 lead with goals by Auston Matthews and Zach Hyman. The second period was a lot more even as the Jets started to get some scoring chances, but not much to show for it. Alexander Kerfoot managed to get a shorthanded goal as Josh Morrissey lost a puck battle, but answered right back as Morrissey got one past Jack Campbell less than a minute later. The period ended as the Jets were outshooting the Leafs 22-21, but the Leafs held on with a 3-1 lead. As the puck dropped for the third, you could tell that both teams wanted to keep the energy going. The Leafs had a few SOG, but weren’t able to get anything else past Connor Hellebuyck, or capitalize on yet another powerplay. The period ended as Paul Stastny took a penalty with just 10 seconds to go, and the Leafs were able to hold on for the win.
What a time to be alive.
Three Stars
3rd Star: Jack Campbell
Even though, yes, the Jets didn’t have many SOG in the first period, Campbell played a pretty solid game. The Leafs dropped the ball in the second period as the Jets outshot them 16-7, and the only shot that made it past Campbell was a shot that he more than likely didn’t see at all due to the traffic at the front of the net. Campbell is 7-0-0, and is without a doubt, our new favourite goalie. When asked about his journey to get here in the post-game, Campbell said that, “I’m playing for the Toronto Maple Leafs, that’s pretty cool … and I get to hang out with a bunch of cool dudes and play some hockey.” #36 on the ice, but #1 in my heart.
2nd Star: Auston Matthews
Auston Matthews opened up the scoring against the Jets with this 24th goal of the season. Matthews played a really good game tonight with lots of chances all night. I’m a firm believer in the opening goal setting the tone for the game. Matthews’ goal was exciting and you could tell that the team was ready to keep the momentum going. The first line was absolute magic tonight, and Matthews managed to end the night with 1 goal and 1 assist.
1st Star: Zach Hyman
Zach Hyman continues to impress me game after game. Tonight, he managed to play just over 19 minutes on ice, had 6 SOG, one assist, and the GWG. Doesn’t get much better than that, right? His energy and confidence on the ice doesn’t go unnoticed. Hyman fits so well on the first line with Matthews and Marner and it shows. His plays are fast, smart, and more importantly, he’s getting the puck to the back of the net. Hyman deserves all the praise, give him his flowers, now.
40th Star: The Leafs’ Powerplay
Five, well really four, but four powerplays! And the Leafs weren’t able to capitalize on any of them. Do you know what’s going on? Because I don’t. To me, their powerplay looked sloppy and disconnected. The boys weren’t getting many shots on net and weren’t thinking their plays through. The Jets managed to hold the Leafs to only one SOG during their 4th powerplay. They need to figure it out and get going if they want to end this season at the top.
Tweet of the Night:
I mean, at this point, it’s true.
What’s Next?
The Toronto Maple Leafs look to stay in the W column as they take on the Winnipeg Jets once more this series. Start your long weekend the best way possible, and catch the game this Friday at 8:00PM on TSN.
Uncategorized
Recent articles from Roxanne Khasow