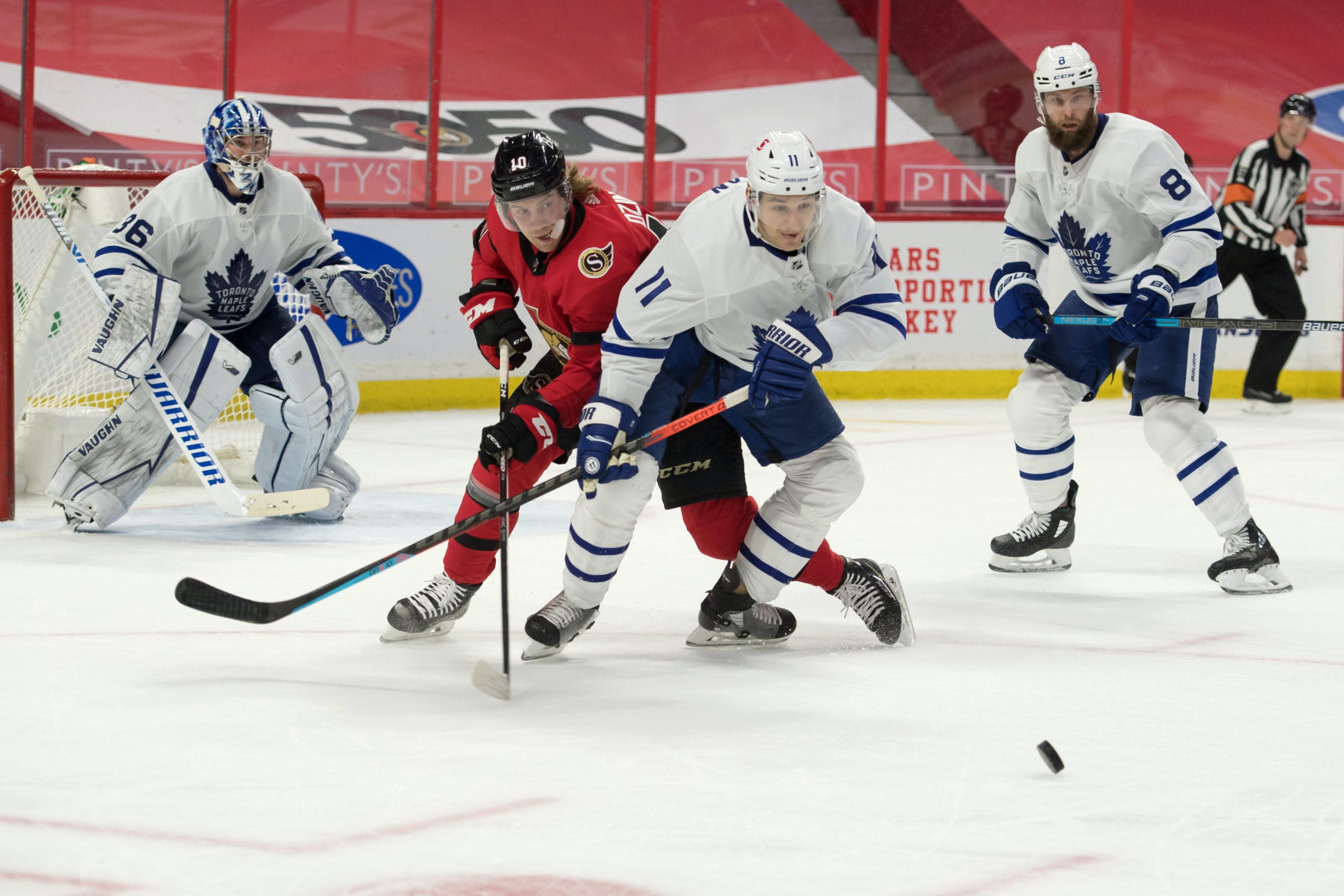 By Roxanne Khasow
1 year ago
Almost one week later, and the Buds are back. Coming off a lengthy break, the Toronto Maple Leafs made their way to the Canadian Tire Centre to take on the Ottawa Senators. As the puck dropped for the first period, the Leafs had a few good chances but the Senators’ 12th goalie in rotation, Anton Forsberg, kept the door shut. As the Battle of Ontario goes, the Senators ended the first period with a 1-0 lead from a goal by Connor Brown. Then, Ilya Mikheyev managed to tie it up in the second period with a goal that almost didn’t count. The Leafs managed to take their first lead of the game with Jason Spezza’s goal in the third, but the Senators answered right back just a few minutes later with a goal by Alex Formenton. By now you shouldn’t be surprised that such a strange game went to overtime. With 18 seconds left in OT, Justin Holl got the winner past Forsberg and the Leafs took the W.
When I say it was a strange game, it was a strange game.
Three Stars
3rd Star: Mitch Marner
For all the times I’ve said or even thought that Mitch Marner is overpaid, I take them all back. Marner is truly a joy to watch on the ice. He’s fast, he makes smart plays, and just keeps going, you gotta love to see it. He had a few really good chances on net tonight, which unfortunately didn’t make it past Forsberg. But, Marner had great puck possession, led the team with 7 SOG, and received an assist on the OT winner, he’s putting in the work, and it shows.
2nd Star: Jason Spezza
Vintage Spezz is on a hot streak with three goals in the last three games! Jason Spezza’s goal that gave the Leafs a 2-1 lead seemed to reignite the team a little while they were looking for something to get them going. I don’t think there’s much that I can complain about when it comes to Spezza as of recent. He’s making plays, putting up points, and not stopping any time soon.
1st Star: Justin Holl
Okay, I have to give this one to Justin Holl. This game was interesting to say the least. A lot of back and forth, a few sloppy plays, and shots that looked like they should have went in, and didn’t. Just as overtime was winding down, Holl found the back of the net from a pass by Marner. Holl had a few chances earlier in the game, and even helped Jack Campbell in the crease. With the OT winner, 4 SOG, and playing over 20 minutes on the ice tonight, Holl is my 1st star of the game.
40th Star: Jack Campbell
I know, I don’t like putting the blame on the goalie, but tonight was rough. Jack Campbell just wasn’t on his best game. He went from making solid saves to making a messy play which resulted in the first goal of the game. In my very non-professional opinion, the play of the puck to the front of the net in the first period just wasn’t a well thought out play, I’m not sure if it was the lack of communication or Campbell not reading the play properly, but it wasn’t good. He ended up holding it down between the pipes to help the Leafs win, but I feel like his play could have been much, much better. At the end of the day he’s 5-0-0, so he’s not horrible.
Tweets of the Night:
A thing of beauty, if you ask me.
What’s Next?
Well, have you checked the standings? The Toronto Maple Leafs are back at the top of the Scotia North Division with tonight’s win. It’s a tight race, but let’s hope that they can keep it going. The Leafs are set to take on the Edmonton Oilers in Toronto at the Scotiabank Arena this Saturday at 7PM. Don’t miss it, catch the game on CBC.
Uncategorized
Recent articles from Roxanne Khasow