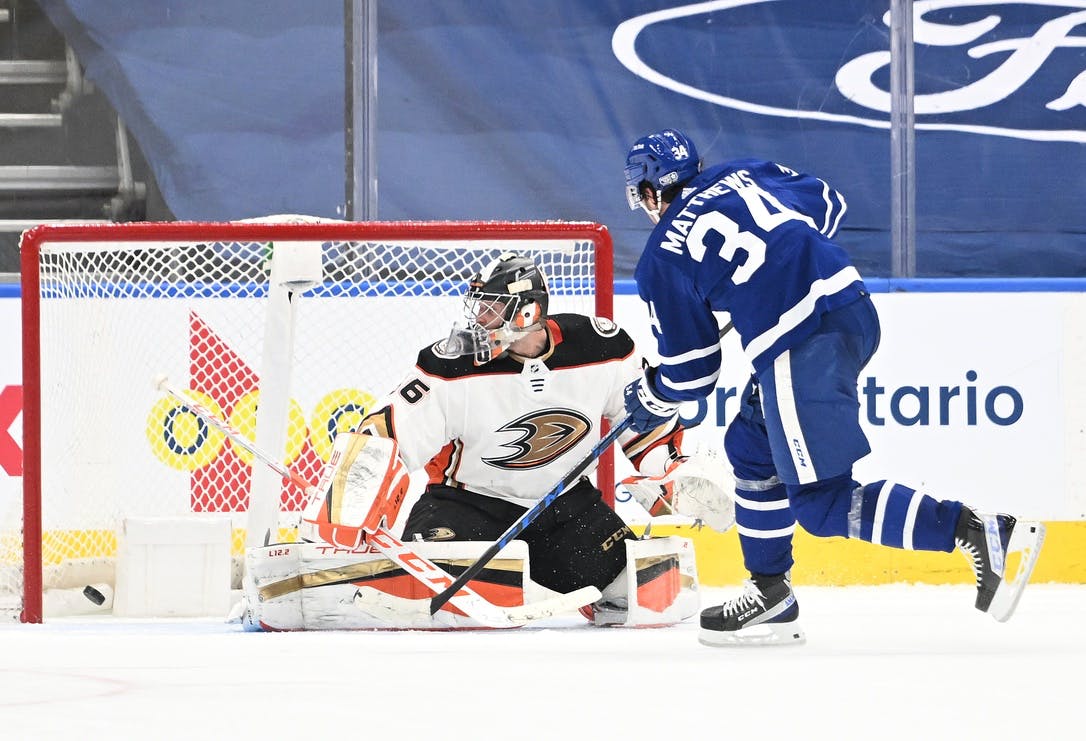 By Scott Maxwell
10 months ago
You can take the Leafs out of the road trip, but you can’t take the road trip out of the Leafs.
Much like we seem to be getting all too familiar with, the Leafs took another 3-1 lead in the first period, only to blow it, but thankfully they’d hold on and win it in the shootout. It was a stain on an otherwise great game for the Leafs, which saw them absolutely walk all over the Ducks from a possession standpoint, doubling them in shots throughout the game, and getting a bunch of highlight reel plays going, even though they could only produce on the power play or the shootout. That just goes to show how great @John Gibson was in the game, and made it a tough win still for the Leafs.

Third Star: William Nylander
Elite third liner William Nylander was one of many players to feast on the power play tonight, putting up a goal and an assist on the power paly for a couple of points, and also had plenty of other great opportunities to add more, but was robbed by Gibson.
Second Star: Mitch Marner
Mitch extended his goal streak to four games with an absolute bomb from the blue line, and also had a nice set up on the Tavares goal. But seriously, who ever expected Marner to score a goal like that in his career, it’s nice to see that he can finally score on the power play again.
First Star: John Tavares
So, it was a pretty even split between Tavares, Nylander, and Marner for the three stars, since all three put up a power play goal and an assist, but Tavares gets the first star solely for claiming Trevor Zegras as his son in overtime.
40th Star: Pierre Engvall
I’m one of the few people who will really go to bat for Engvall, but this was not one of his better games. Not only was he the third worst Leafs forward in terms of possession and expected goals with 42.86% and 28.27% respectively in a game where the Leafs dominated possession, but he also had a couple of ugly turnovers, and scored one of the three Ducks goals by shooting it into Spezza’s shins and into the net. Hopefully he rebounds soon, because we don’t need Nick Ritchie back in the lineup.

In my preview earlier today, I said it would probably be smart to get to Gibson early and not let him get in a groove, and also not rely on special teams because the Ducks have the better penalty kill and draw more penalties, and leave it to even strength where the Leafs would probably dominate. While the Leafs had more possession at 5v5, they got outscored 3-0 at even strength, got all three goals against the Ducks PK, and managed to come out with a win despite Gibson being in a groove. Hockey’s weird sometimes.

I hate how true this is.

The Leafs get another multi-day break before hitting the road again and going down to Detroit on Saturday, where one of their leading scorers in Tyler Bertuzzi will finally get to play the Leafs, since, you know, he’s not allowed in Canada right now. The Wings find themselves on a three game losing streak, including a high scoring 8-5 loss tonight to Chicago. You can catch the game on SN at 7 p.m. EST.
Uncategorized
Recent articles from Scott Maxwell