TLN Three Stars: The Hutchinson Experience does not end well 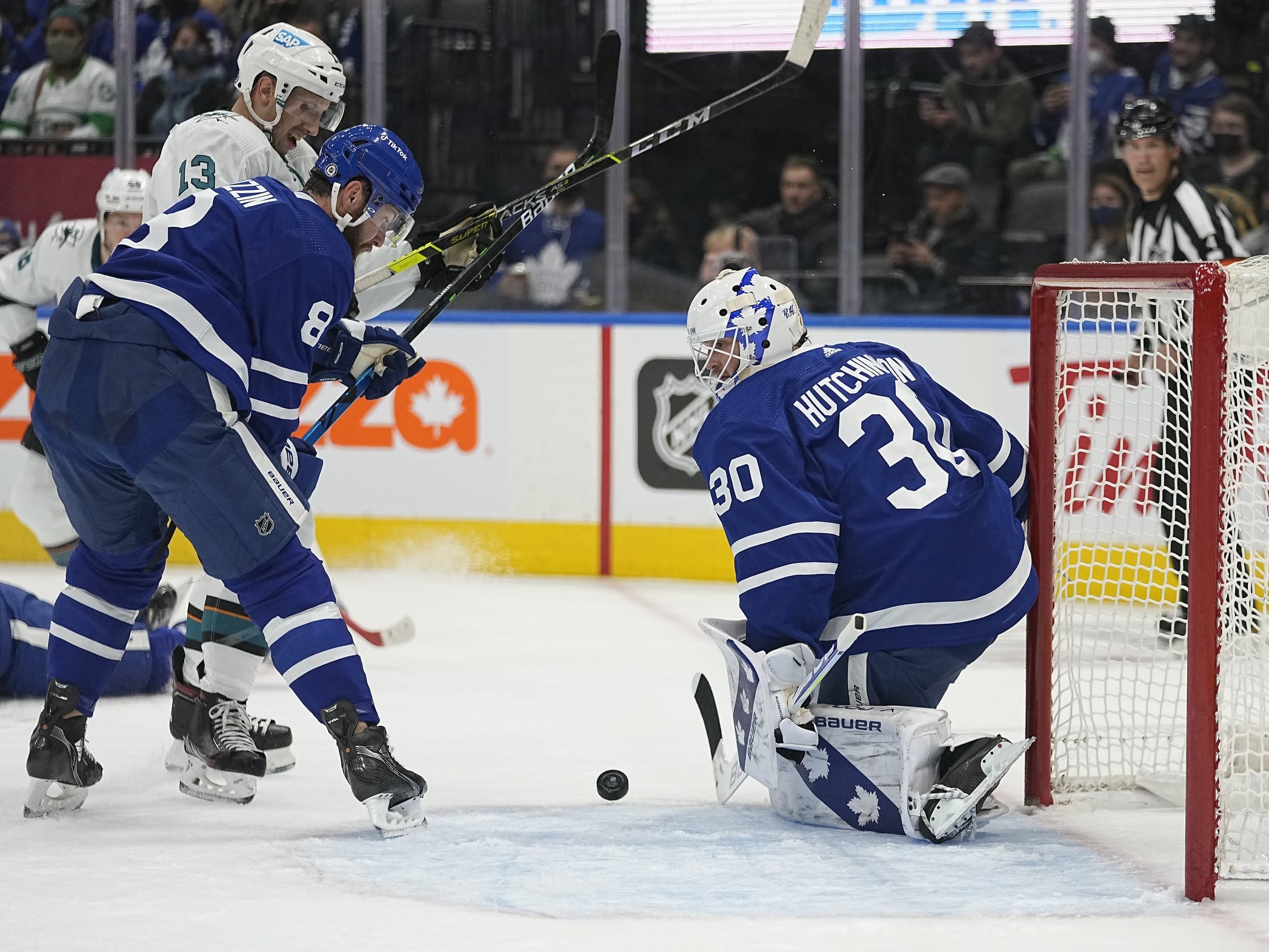 By Michael Mazzei
1 year ago
The Leafs had a prime opportunity to snatch two points away from a team on the back half of a gruelling road trip. San Jose just played the night before, had to travel, and the start time for this game was an hour earlier. Should be an easy win, right?
The Michael Hutchinson of old has entered the chat.
After a quiet first period with not much action to discuss, the floodgates opened in the second as both teams traded three goals within a 1:13 span, but found themselves down by one at the end of it. Then Ondrej Kase found a burst of speed to get his team back in the game while taking out the referee in the process (LOL) but Erik Karlsson crushed those hopes before they could manifest any deeper by scoring after a turnover by Auston Matthews and a seeing-eye shot from the point.
Any aspirations of a revitalized team changing course in the third were quickly dashed when Sharks rookie Jonathan Dahlen fired home a shot from the slot and gave his team a commanding two-goal advantage. John Tavares scored off his arm to give the Scotiabank Arena faithful a false sense of security that a point could be salvaged, but Logan Couture ensured that this game would be capped off by an embarrassing result as his empty netter was the cherry on top of a mediocre sundae.
After five games, the Leafs have surrendered the first goal on four occasions. They allowed the Sharks to become the first team in NHL history to have their first four wins of the season be against Canadian teams. And now they head to the US for the first time since 2020 for a matchup with an injury-riddled Penguins squad where they are almost certainly going to lose. Talk about a wasted weekend.

Third Star: @Ondrej Kase
Kase had a bit of an injury scare this week as he was held out of practice due to some discomfort from blocking a shot in their last game against the Rangers. It’s a good thing he was good enough to play because his first as a Leaf was nothing short of memorable. He jumped on the loose puck and was able to spring free past the defender before cleanly beating @Adin Hill for the tying marker. The best part was him colliding with Wes McCauley afterwards, who had some fun with it.
Second Star: @William Nylander
The top six have been quite the mess since the season began and the vast majority of the concerns fall on the play of the big named stars like @Auston Matthews, @Mitch Marner, and @Nick Ritchie. By contrast, Nylander seems to be a man on a mission as he yet again had a solid game and even got a promotion to the top line because of it. I’m starting to think that he might be worth his contract value.
First Star: @Jason Spezza
When the stars failed to make a serious impact on the game, their league-minimum legend came through with a big goal. When the top power-play unit forgot how to enter the offensive zone and got an early trip to the bench, Spezza led the charge by dictating the second unit and being responsible for a plethora of scoring chances that could have found twine. It’s no longer a question of if he’s still got it, the question for Spezza is how long can he maintain his elite play.
40th Star: @Michael Hutchinson
While you could argue that Ritchie would be deserving of this category as he got benched for the latter stages of the first and second period, it was the goalie who made the difference but in the worst way possible. Barely twenty seconds after Spezza scored to tie the game, Hutchinson allowed a floater from the circle that helped @Timo Meier give his team the lead back. He didn’t get a good read on @Jonathan Dahlen’s shot from the slot and his worst blunder was allowing this shot from @Erik Karlsson to get past him. While there were a few moments that saw him make some important stops, Hutchinson was more of a hindrance than insurance and he is the primary reason why this winnable game was lost. Let’s hope this is the only instance of him returning to the 2018-2020 form or else it might be time to consider speeding up @Petr Mrazek’s recovery.

He may be the third-string goalie, but he had to step up and he did not.

As mentioned off the top, the Leafs will play an NHL contest in the United States for the first time since March 6, 2020, where they lost 2-1 to the Ducks. Saturday’s game sees them face a Penguins team that is ravaged by injuries and COVID-19, seeing as star players @Sidney Crosby and @Evgeni Malkin have started the year on LTIR. This logically means that the Leafs are going to lose this game convincingly and @Kasperi Kapanen will score a hat trick against his old team, with the final goal being an empty netter after the Leafs pull within a goal. Check back here in 24 hours to see how accurate I was.
Puck drop for tomorrow’s game returns to the normal time of 7 p.m. EST. You can catch the action on CBC and Sportsnet.
Uncategorized
Recent articles from Michael Mazzei