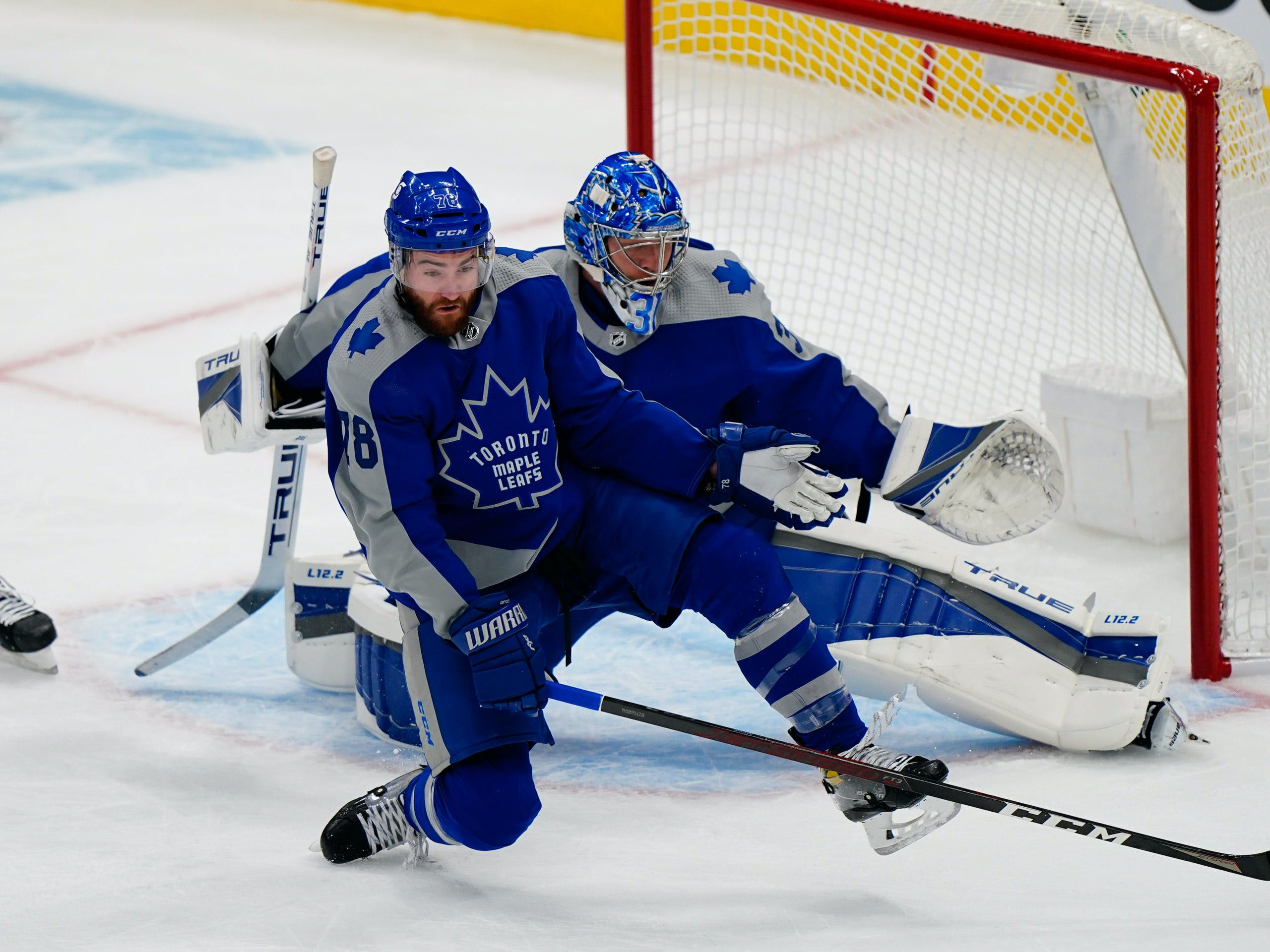 By Mer
1 year ago
The Leafs signing TJ Brodie was heralded by many as the biggest achievement of that off-season. In signing him, Dubas addressed a major need on the blue-line, brought in a defenseman seemingly well-matched with Morgan Rielly, and made the team’s roster look immediately stronger.
And believe it or not, Brodie mostly lived up to those expectations. He was a solid, calm, consistent force on the ice who was almost invisible in the best way – whether he was suppressing shots from the Leafs opponents or quietly setting up plays, TJ Brodie made an impact.
It helps, of course, that he seems like the world’s nicest guy (in a quiet, humble, strong but silent type kind of way). By all accounts, the Leafs are getting what they’re paying for, and maybe more, in TJ Brodie. TLN staff agree, as everyone had him ranked somewhere in the 5th-7th slot. Brodie is undoubtedly one of the most valuable Leafs.

I can’t lie, I’m not a stats person when it comes to hockey. What I can tell you is that Brodie delivered bang for his buck as a defensive defenseman on the Leafs squad, and TLN’s Brian summed it up so well in his post-season look at Brodie, HERE.
As Brian explained: “With Brodie on the ice at 5v5, the Leafs controlled 54.5% of the expected goals, and a staggering 65.48% of the goals scored, which was the best rate amongst defensemen who played at least 1,000 minutes.”
While Brodie was a defensive start during regular season, he elevated to superstar during the (brief) postseason run: “Once again, the Leafs controlled the expected goals battle with him on the ice, controlling nearly 67% (lol) of the expected goals, but Brodie was also able to help completely stymy Montreal whenever he was one the ice, as the Canadiens were unable to score a single goal at 5v5 with TJ Brodie on the ice across the seven games of the opening round.”
Brodie is a unique player who looks good to both the charts/stats crowd and to the eye test crowd – and that alone tells us pretty much all we need to know.

Well, the stats really explain it, don’t they? Last season, TJ Brodie demonstrated that he was definitely a key piece of the Leafs defensive puzzle, endearing himself to fans pretty much across the board. While scoring isn’t his forte, he was brought in to be a defensive defenseman and he delivered.
One of the most interesting things about Brodie, though, is that he’s the least flashy player around. When you look at his numbers or watch him closely you absolutely can see the value he adds and the role he plays, but he’s never the most memorable guy out there. Game after game, Brodie shows up, does his job, does it well, and takes very few accolades for it. Somehow, that makes him even more endearing.
On a team with a ton of flashy offensive talent, TJ Brodie is unique and necessary. And that’s what we saw last season.

Likely more of the same, if the exhibition games are any indication – though maybe with a few more points to his name.
He’s also helping shape some of the younger D-men:
And really, what more do we need? Brodie is giving the Leafs exactly what they have asked of him, and the best case scenario is that he continues to do exactly what he has been doing.
There’s always the chance that his age starts to slow him down, which would be a worst case scenario I suppose, but he’s such a strong player that I’m hedging my bets and am pretty confident we’ll be getting basically the same TJ Brodie we got last season – and that’s a good thing.
The best part about him is that he makes Morgan Rielly, and seemingly anyone he’s paired with, better, too. So if you aren’t yet on the TJ Brodie hype train, hop on.

Like I’ve mentioned, he’s not a flashy, highlight reel kind of player. So here’s some TJ Brodie just doing his regular thing:
And, here is his first goal as a Leaf – try not to cry. I didn’t succeed.
Like Nick said, this is TJ Brodie doing routine stuff, because that’s who he is. He’s solid and consistent and one of my favorite additions to the Leafs roster in a long time. His signing should go down as a major win for Kyle Dubas – hard stop.

TJ Brodie’s goal song would be…