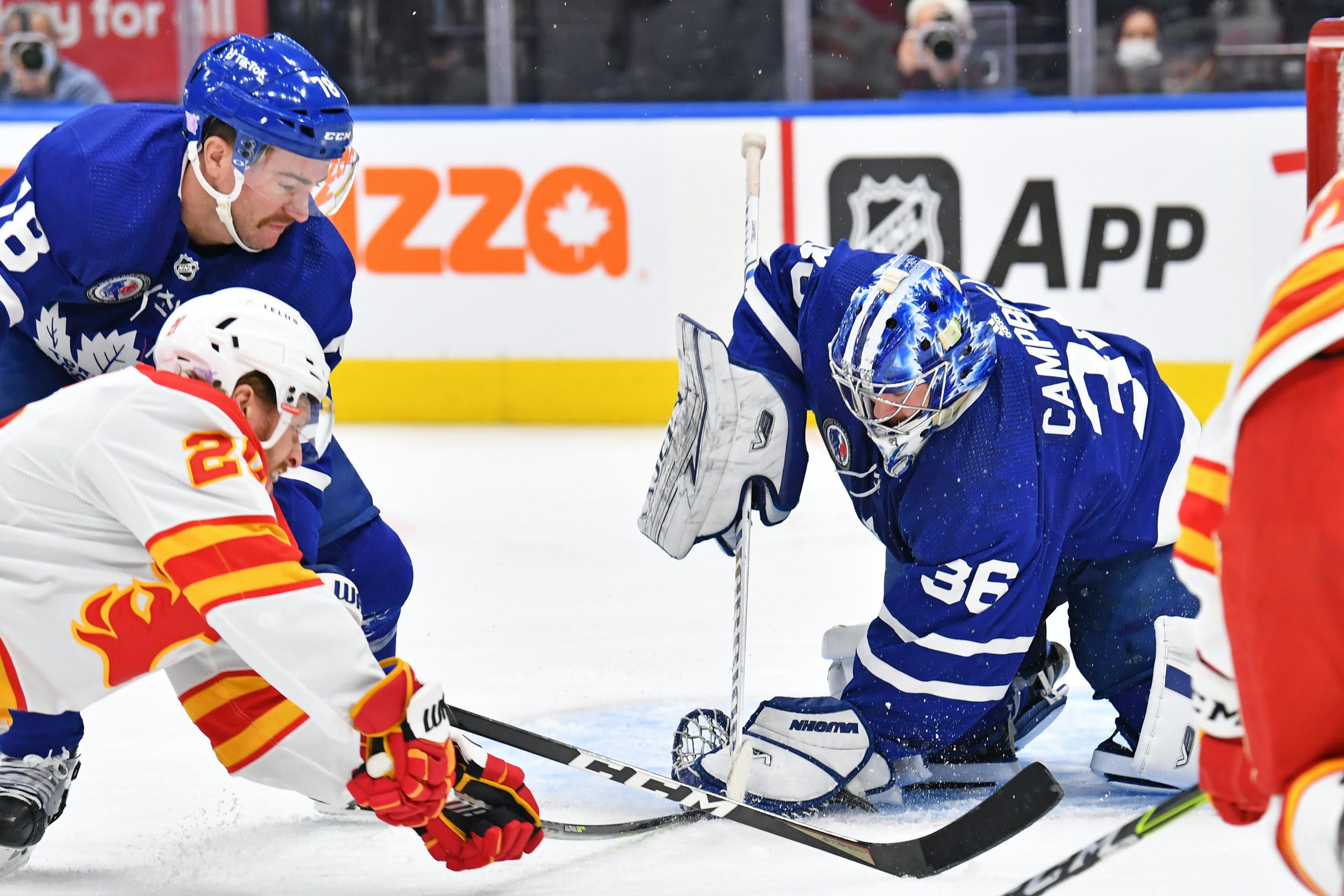 By Joseph Zita
1 year ago
After entering probably their toughest week of the early season last week, the Toronto Maple Leafs played some exceptional hockey against three top contenders in the NHL in the Vegas Golden Knights, Tampa Bay Lightning, and Boston Bruins. Now I know it was a depleted Vegas team, but those are the games Toronto typically loses, so it was great to see them dominate that game and pick up an important two points on home ice.
They were rolling into week five scheduled to play four games in a week for the first time this season – against the Los Angeles Kings, Philadelphia Flyers, Calgary Flames, and Buffalo Sabres – and they continued their winning ways going 3-1-0 in those four contests. They opened the week at home to the Kings, and despite outplaying them in the second and third period, they came away with an ugly 5-1 loss that broke their five-game winning streak.
It wasn’t a game to totally dwell on given that they just won five in a row and they had three more games coming up that week including one against the Flyers in less than 48 hours. They then entered Philadelphia and came away with an impressive 3-0 win while continuing to display great special teams play, which has been a big reason for their success as of late.
After going 1-1-0 in their first two games last week, they had a back-to-back coming up on Friday and Saturday against the Flames and Sabres. Jack Campbell started the Friday game and earned himself another impressive win as the Maple Leafs won 2-1 in overtime, and then Joseph Woll made his NHL debut against the Sabres on Saturday and picked up his first NHL win with a stressful 5-4 win, to say the least.

Making his debut as one of the three stars in these weekly three stars of the week for the first time this season, Alex Kerfoot has deservedly so earned a star from this past weeks performance against the Kings, Flyers, Flames, and Sabres. For someone whose name has been in constant rumours about him potentially being a player to be shipped out of Toronto due to his cap hit, he has honestly started the 2021-22 season how he ended the 2021 playoffs, playing great hockey. Flipping back and forth from the second and third line so far this season, it seems like wherever he is slotted in, he produces offensively.
After debuting on the third line, he then got promoted to the second line to play with Tavares and Marner – where he was good and produced on the scoresheet – but in their latest game against the Sabres, he slotted back on the third line to play with Engvall and Kampf, and you guessed it, he produced yet again and was a key reason as to why they pulled out a win on Saturday night.
In four games last week, Kerfoot registered four assists and improved his overall point total to 10 points in 16 games to start the season – two goals and eight assists – and is currently tied for fifth in team scoring with Morgan Rielly. The way that he has continued to elevate his play wherever he goes in the lineup and whoever he plays beside is truly awesome to see because, within the past week and a half, it seemed like only the core four players were putting up points for this team.
Out of the four assists that he registered last week, two of them had significance to them as he set up Nylander who one-timed the shot which was tipped by Kase that tied the game at one against the Flames on Friday night which ultimately sent the game to overtime. His other assist was the game-winning assist Saturday night in Buffalo where he set up Rielly for the goal with just under 12 seconds to go to take the lead 5-4 and eventually win the game.

After coming off the first star of the week last week, Jack Campbell has remained a star, this time, as the second star of the week after yet a couple of more stellar performances for the Toronto Maple Leafs. He did start the week with a loss to the Kings where he allowed four goals, but he quickly bounced back the next game against the Flyers and picked up a really impressive 36 save shut out on the road to earn his seventh win of the season and he second shut out of the season as well.
He clearly used that performance as momentum as he’s been doing all season long – even dating back to last season – and posted yet another great performance at home against the Flames where the Maple Leafs were down in the third period and had to try and fight back to pick up the two points.
In typical Jack Campbell fashion, he kept the team in the game and they eventually tied it with a Nylander shot that was tipped in by Kase that forced the game into overtime where Matthews then scored the eventual game-winner with a quick release from the right side that beat Vladar. Speaking of Matthews, he easily could’ve been a star this week too as he put up four points in four games just like Kerfoot, but I just felt like Kerfoot was the more consistent player that week.
Campbell obviously got the night off Saturday which was the second half of the back-to-back and that was undoubtedly the right call given his workload as of late and due to the fact that the Maple Leafs play another four games this week including another back-to-back against the Penguins and Islanders on Saturday and Sunday night.

The man has yet again earned himself a star this week with his consistency throughout the early part of the regular season. Arguably the Maple Leafs’ best forward so far this season with the consistency of his offence and just him being clutch with four game-winning goals, William Nylander has earned week fives first star of the week after he registered five points – two goals and three assists – in four games.
It’s no secret that Nylander has been one of, if not the Maple Leafs’ best forward since the beginning of the season, as he has registered at least a point in 11 of the 16 games so far, and is currently tied with John Tavares for the team lead in points with 15. Nylander opened up the week with just a single assist in a 5-1 loss to the Kings where he passed it down low to Marner who fed Tavares in the slot for a power-play goal.
This is where he helped carry the team as he entered Philadelphia and scored two goals – including the game-winner – with one of them being controversial to some people as it looked like he kicked in his first goal, but upon further review, it was deemed it was not a kicking motion and he earned his sixth and eventually the seventh goal of the season that night.
He continued his dominance and put up two helpers in their next game against the Flames at home which helped tie the game at one late in the third period, and of course, the game-winning assist in overtime where he passed the puck to Matthews in their own zone and Matthews just did Matthews-like things and skated with it from the defensive zone to the offensive zone then released it and it beat Vladar to grab the win. However, Nylander didn’t have the best game against the Sabres Saturday night and was even benched for a bit in the third period with how he performed, but I still think he deserves the first star in my opinion, and if not the first star, then for sure one of the three stars given his five points last week and just overall his game against those opponents.
Uncategorized
Recent articles from Joseph Zita