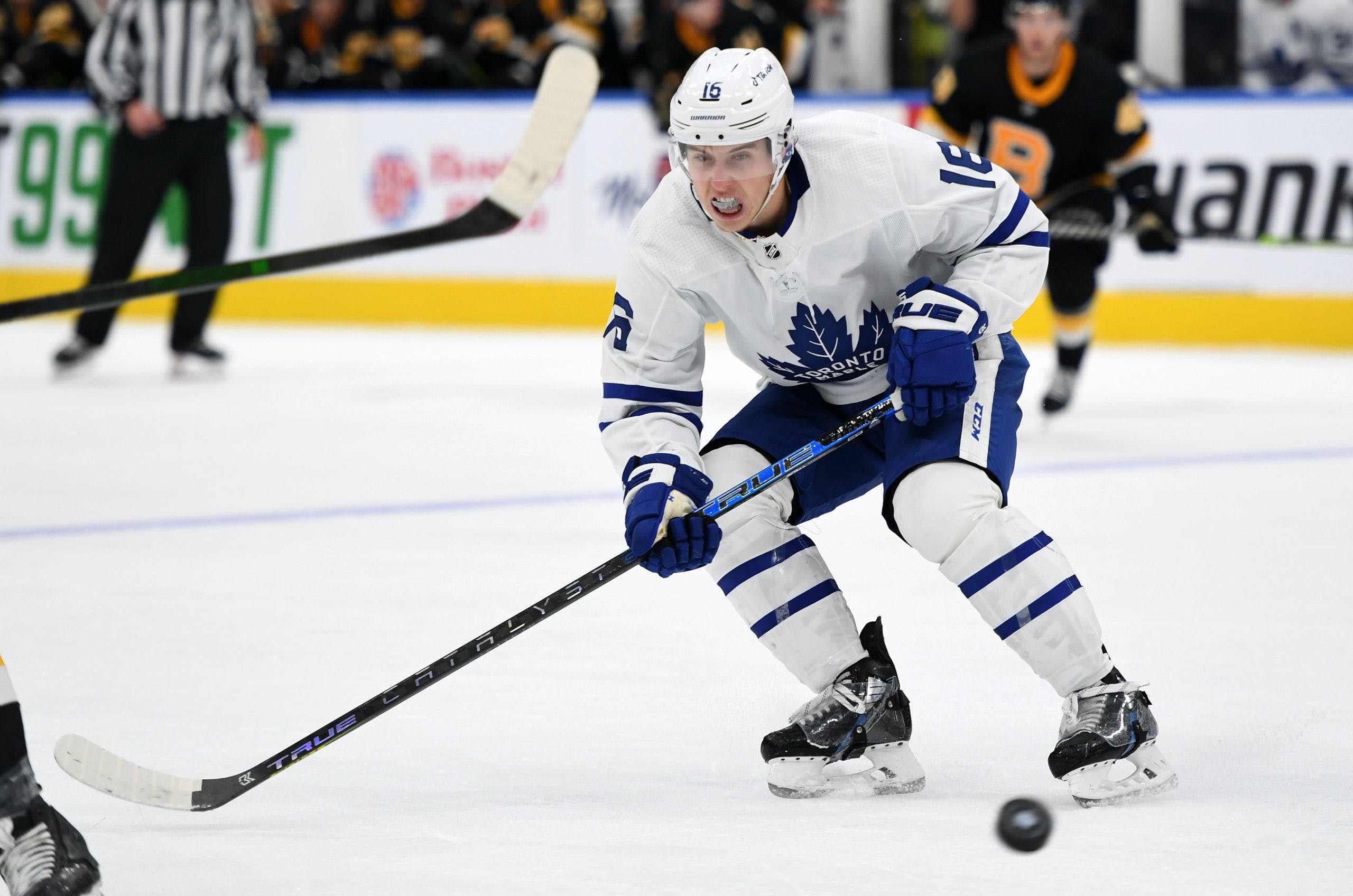 By Joseph Zita
1 year ago
The Toronto Maple Leafs were entering week four of the regular season up against the three toughest opponents that they would see thus far in the early season in Vegas, Tampa Bay, and Boston. After coming off week three with a record of 2-1-0 and starting to play better hockey for an extending period of time, this mini stretch of games was going to be a good test for the Maple Leafs.
They opened the week hosting a very depleted Vegas team missing their best players in Mark Stone, Max Pacioretty, William Karlsson, and the list goes on. That game against the Golden Knights was arguably the Maple Leafs’ best game of the season as they had a little bit of everything from great offence to great goaltending and their special teams were on point too as they pulled out a 4-0 win.
They welcomed the defending back-to-back Stanley Cup champions Tampa Bay Lightning into town Thursday night for the first time since March of 2020 when they played just two days before the league would shut down due to COVID-19, so it was a well-awaited rematch between these two offensive powerhouses. However, the offence wasn’t the main attraction in this game, it was goaltending, and Toronto came back from behind to win 2-1 in overtime.
They ended the week taking on the Bruins for the first time in the Sheldon Keefe era and the first time since November of 2019. Almost two full calendar years ago! Well, it’s safe to say this game, just like the Tampa Bay game was well worth the wait as it was a very entertaining game from both teams. But ultimately, Toronto picked up an impressive 5-2 win and ended the week going 3-0-0.

Auston Matthews was kind of in the same boat as Marner to start the season, but at the same time kind of wasn’t. However, that is well past these two players right now as they both have been playing some exceptional hockey for the past handful of games and they have been a big reason as to why this team is currently on a five-game winning streak.
Matthews missed the first three games of the season due to off-season wrist surgery and he ended up making his season debut against the Rangers, which was game four of the season for Toronto. From that first game until game three of his early season, he was still pointless as he and Marner couldn’t find the scoresheet and it was frustrating many, many fans. However, he finally scored his first goal in his fourth game back against Carolina and it felt like the flood gates would now open for the reigning Rocket Richard winner.
These past three games for Matthews was like watching the Matthews we all know and have known ever since his rookie season back in 2016-17. He opened up the week with a stellar two-goal performance against Vegas including a vintage cross-seam pass from the other side of the ice and his ridiculous curl and drag shot that instantly beat Robin Lehner on the power-play. His play on the new-look like with Bunting and Nylander has been a treat to watch, and that goes the same with the other new-look line of Tavares, Marner, and Kerfoot.
Matthews continued his point production Thursday night with a two-assist game against the defending back-to-back Stanley Cup champions and ended the game setting up Nylander with a one-timer that beat Vasilevskiy in overtime to win the game for Toronto. He has had one two-goal game this week and followed it up with a two-assist game the next game, so you knew a goal was coming soon from him, right?
Well, it did, and he potted two more home Saturday night against the Bruins, both on the power-play, and extended his point streak to three games with six points in those contests and a total of eight points in nine games on the early part of the season. The main question from some fans in the first couple of games for Matthews was if his wrist was healthy enough to take the shots he does, well, I think by the looks of his latest games, his wrist looks healthy and Matthews is ready to defend his Rocket Richard trophy this season.

After coming off a very slow start to the season, Mitch Marner has arguably been the Maple Leafs’ best player over the past handful of games as he has come alive again and playing like the Mitch Marner Leaf fans know and love. Last week, Marner had himself some good games against the Hurricanes, Blackhawks, and Red Wings despite only picking up two points in those three games.
He then continued his dominance on the ice and had himself quite the week and I honestly think he is in the running to earn one of the NHL stars of the week after his performance against the Golden Knights, Lightning, and Bruins. Entering Tuesday’s game against Vegas, he had three points in nine games. However, by the end of the week, he now has 12 points in 12 games after going off in these three games.
Tuesday night he scored probably one of the nicest goals in his career and one of the nicest in recent memory on this Toronto team. He also tallied two assists with his one goal and had himself his first multi-point game of the season and helped lead the Leafs to victory. Thursday night against the Lightning was more so of the same thing as he added two more helpers on the season, including the game-winning assist on Nylander’s goal in overtime.
On the verge of extending his point streak to five games, Marner was playing the best hockey of his season so far, and that’s exactly what he continued to do Saturday night as he registered a tremendous four-point night against their division rivals to extend his point streak to five games with 11 points in those five contests. This has been by far the best stretch of the season for Marner, and it’s honestly nice to see given how slow his start to the season was and the frustration he showed through the first seven games of the year.
In these three games this past week, he ended up with nine points – seven of them being assists – and deservedly so earned the second star of the week for the Toronto Maple Leafs last week.

Coming off a third-star last week, Jack Campbell has climbed himself back up top and grabbed the first star of the week with his performance this week against three pretty tough opponents in Vegas, Tampa Bay, and Boston. Coming off two straight wins against Chicago and Detroit, Toronto was looking to continue that momentum and extend their winning streak, and that’s exactly what they did, and a huge reason for that was the play of Jack Campbell.
Entering Tuesday’s game against a depleted Vegas team, Campbell didn’t see much action through the first half of the game due to Toronto applying a lot of pressure in the Vegas zone for the majority of the time, but when he was called upon, he answered and delivered the team a 26 save shutout on home ice to improve his record and numbers on the season.
Campbell and the team had to shift their focus to the Lightning just less than 48 hours later as they were hosting them for the first time in over a year and a half. After a slower start than the Vegas game, Tampa Bay looked like the better team early in the game but Campbell made some important saves early for the team before allowing a goal from Maroon.
Toronto ended up chipping away and tied the game late in the third and a big reason for that was due to the stellar, and I mean stellar display of goaltending from Jack Campbell in the second half of the game as he made some big-time saves against Point and Stamkos to keep the Leafs within one goal before Tavares tied it with under a minute left. Toronto came back to win in overtime and they can thank Mr. Campbell for that one.
After playing arguably his two best games of the season so far, Campbell was up for another good challenge against a good Bruins team on Saturday night, Hockey Night in Canada. The Maple Leafs had a pretty good start to the game last night as they created some chances early on in the first period for them but they couldn’t find the back of the net because of some early saves from Ullmark and even a huge block by Bergeron.
Boston ended up scoring the first goal of the game off of a net front tip from Hall on the power-play but the Maple Leafs, just like the game prior, fought their way back and scored four unanswered goals – two on the power-play – to ultimately take a 4-1 lead early in the third period. Boston applied a lot of pressure and outshot Toronto by a large margin in the third and scored a goal to get within two, but Campbell shut the door, yet again to help secure another win for the Maple Leafs.
Uncategorized
Recent articles from Joseph Zita