The Leafs 3 Stars of the Week: Matthews and Nylander continue to dominate 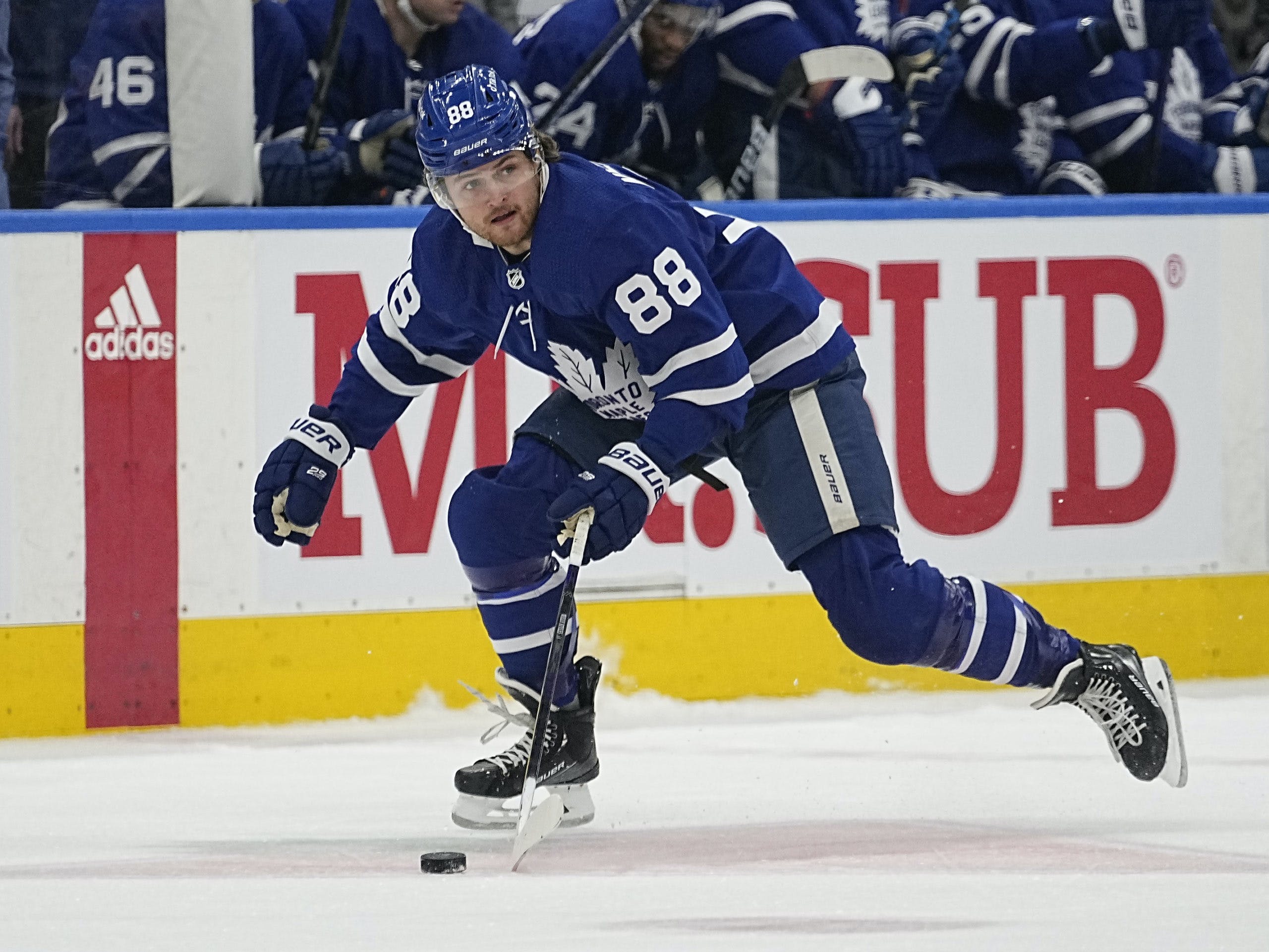 By Joseph Zita
1 year ago
After ending week eight with an overtime loss to the Minnesota Wild, the Toronto Maple Leafs held one of the hottest records in the entire NHL of 15-2-1 in their last 18 games dating back to October 27th where they picked up a very important overtime win over the Chicago Blackhawks after dropping four straight. Well, they didn’t have to wait long to try and get back into the win column after that Wild loss because they were in Winnipeg the next night to play the Jets, and boy, what a game that was.
The Maple Leafs opened up the week with a very weird and very out-of-control game that ultimately got so out of hand that the referees literally had no idea what they were doing out there. This game was hard to watch for multiple reasons given that Toronto was very sloppy and didn’t really help out Joseph Woll in the net in any way. That and the fact that this game had big hits, wrestling in the corners, and even a couple of fights, not to mention a couple of suspensions and fines after the game had concluded. I shouldn’t have to explain myself because I feel like everyone knows what I’m talking about and the Maple Leafs ended up losing that game 6-3 and had dropped two straight for the first time since late October.
Not even 48 hours later, the Maple Leafs were back home and set to face the Columbus Blue Jackets for the first time since… game 5 of the 2020 play-ins. However, this time, Toronto came away with the win, but it wasn’t smooth sailing because despite having a 5-1 lead, the Maple Leafs found a way to stress all their fans and win this one 5-4 with a goal that just beat the buzzer from Max Domi with less than a second left in the game.
Now back in the win column after dropping two straight on the road in a back-to-back, Toronto was welcoming in the defending back-to-back Stanley Cup champions into town for the second time this season. They started the game great by scoring a goal early on the power-play and controlling the majority of the shots and possession, however, this game quickly got out of hand for them as turnovers were their worst enemy and it felt like they had as many turnovers as they did shots in that game. They were down 4-2 at one point and managed to get within one in the third period but Tampa Bay sealed the deal with an empty netter and Toronto lost 5-3 and now had dropped three of their last four games.
After losing three of their last four and currently 1-2-0 during week nine, the Maple Leafs didn’t quite have an easy test on their hands Saturday night as they were hosting a Blackhawks team, who despite starting the season slow have won nine out of 14 games under their new coach. Well, they quickly went up 4-1 in that game but in typical Toronto fashion, lost that lead and blew a third-period lead but not until David Kampf scored with a bit over a minute remaining in the third period to give the Leafs the 5-4 lead and ultimately win the game.
Now before we get into week nines three stars, I want to say there are a handful of players who could’ve made the three stars but it was actually a good week for a lot of different Maple Leafs so it was tough for me to only pick three.

It’s honestly been so much fun watching Ondrej Kase play in a Toronto Maple Leafs uniform this season. He started the season off slow and really didn’t find his groove offensively until recently, but since he has, it seems like he’s putting up at least a point every other night or at least two points every other night, and last week was by far one of his best weeks in a Maple Leaf jersey as he put up five points in four games.
Playing on the third line to begin the week and then being promoted to the first line towards the end of the week along with seeing some top unit power-play minutes in the absence of Mitch Marner, Kase was a beast this past week on both ends of the puck for Toronto and had contributed in on some pretty big goals for this team.
In four games last week, Kase registered five points including three goals which now improves his totals to eight goals and five assists for 13 points this season. You may be thinking that 13 points aren’t all too special, but he has 11 of those points in his last 13 games after starting the season with just two points in 13 games. You could say that his point totals are due to the fact that he’s seen some top-six minutes and is now on the first power-play unit, but that skillset has always been there for Kase and he’s always been a goal-scorer, even dating back to his Anaheim days, so it’s nice to see him being rewarded for it now.
Out of Kase’s three goals scored last week, two of them came in the Lightning game and his second of the night almost sparked a third-period comeback for Toronto but they ultimately fell short and ended up losing 5-3 as we all know. But what I’ve been liking about Kase so far this season is the fact that he plays until the final horn and he doesn’t stop until he hears a whistle. What I mean by that is he honestly looks like one of the hardest working players out there despite how many minutes he sees a night and despite him being thrown around sometimes by the opponents bigger players, he’ll get right back up and hit you right back and he’ll do whatever it takes to win games it seems like.

This really shouldn’t come as a surprise that William Nylander is named one of the three stars of the week yet again this season given that he has been one of the most consistent Leafs this entire season and he showed it yet again last week as he recorded seven points in four games, including a three-point night against an original six opponent in the Chicago Blackhawks.
Coming into week nine, Nylander was already one of the leading scorers on the team with his stellar play all season alongside John Tavares, however, he took it to another level in these four games and is currently on pace for his best season yet (goals, assists, and points). On Saturday night in Minnesota, Nylander had his four-game point streak snap (seven points) but wasn’t hesitant to start a brand new one the next night in Winnipeg as he recorded a single assist in that 6-3 loss that looked like a boxing and wrestling match at times that game.
Fast forward a couple of days against the Blue Jackets and Nylander would record his eighth multi-point game of the season as he potted home his 11th goal of the year along with an assist on Tavares’ power-play goal that gave Toronto a 4-1 lead at the time. With three points in two games to begin the week, Nylander and Toronto had a test coming up with Tampa Bay rolling into town, and despite them falling short 5-3, Nylander still found a way to show up on the scoresheet with yet another goal that came on the power-play with just seconds remaining in the first period.
Now that they’ve lost two out of three games this week and Nylander has still been contributing, Toronto was up against Chicago Saturday night and this was just a typical Nylander game where he took over early and I kind of felt bad for the goalie because you could tell Willy was dancing early in this game. He put up three points in the first period yes, three points in the first period, and had extended his current point streak to four games, had recorded his ninth multi-point game of the season, and his fifth in his last eight games as well. Along with his stellar offense, Nylander has also shown some moments where he’s making some strong defensive plays and it’s been great to see.

What an absolute tear Auston Matthews has been on lately. After missing the first three games of the season and only recording two points in his first six games, Matthews has quickly found himself in the top 10 in league points (31) and top three in league goals (18). This week he showed why he’s one of the best in the entire league and why he’s the reigning Rocket Richard winner as well as he potted home four goals along with three assists for seven points in four games this past week.
In games against the Jets, Blue Jackets, Lightning, and Blackhawks, Matthews was without his winger, Mitch Marner as he’s currently sidelined with an injury that is expected to keep him out of the lineup for 3-4 weeks, so it was obvious that there would be a couple of auditions to play first-line right wing in Marner’s absence. First, it was Simmonds and then it was Kase who remained on his wing through the end of the week and I honestly think they should keep it like that until Marner returns from his injury.
The first line of Bunting – Matthews – Kase sounds fast and fun and that’s honestly what it is as this line – whenever Kase was on it – provided a lot of skill and it’s been truly fun to watch these three out there on the ice. For Matthews individually, he opened up his week in Winnipeg with yet another goal that extended his goal streak to six games, and had 10 points in that stretch. He clearly didn’t slow down there as he registered yet another multi-point game this season and scored two more goals along with an assist in a 5-4 win over the Blue Jackets and just flat out demonstrated his dominance on the ice.
In games against the Lightning and Blackhawks, Matthews recorded a total of three points with a single assist against Tampa Bay in that 5-3 loss, and a goal and an assist in that stressful 5-4 win over Chicago Saturday night. With all that Matthews is currently doing, whether it’s his offense or showing his capabilities defensively, he’s showing us that his wrist honestly looks 100% healthy or at least very, very close to it because there were a lot of people wondering if it was healthy given that he wasn’t scoring the typical Matthews goals we’re all accustomed to. Well, I think it’s now safe to say his wrist looks pretty good to me right now.
Uncategorized
Recent articles from Joseph Zita