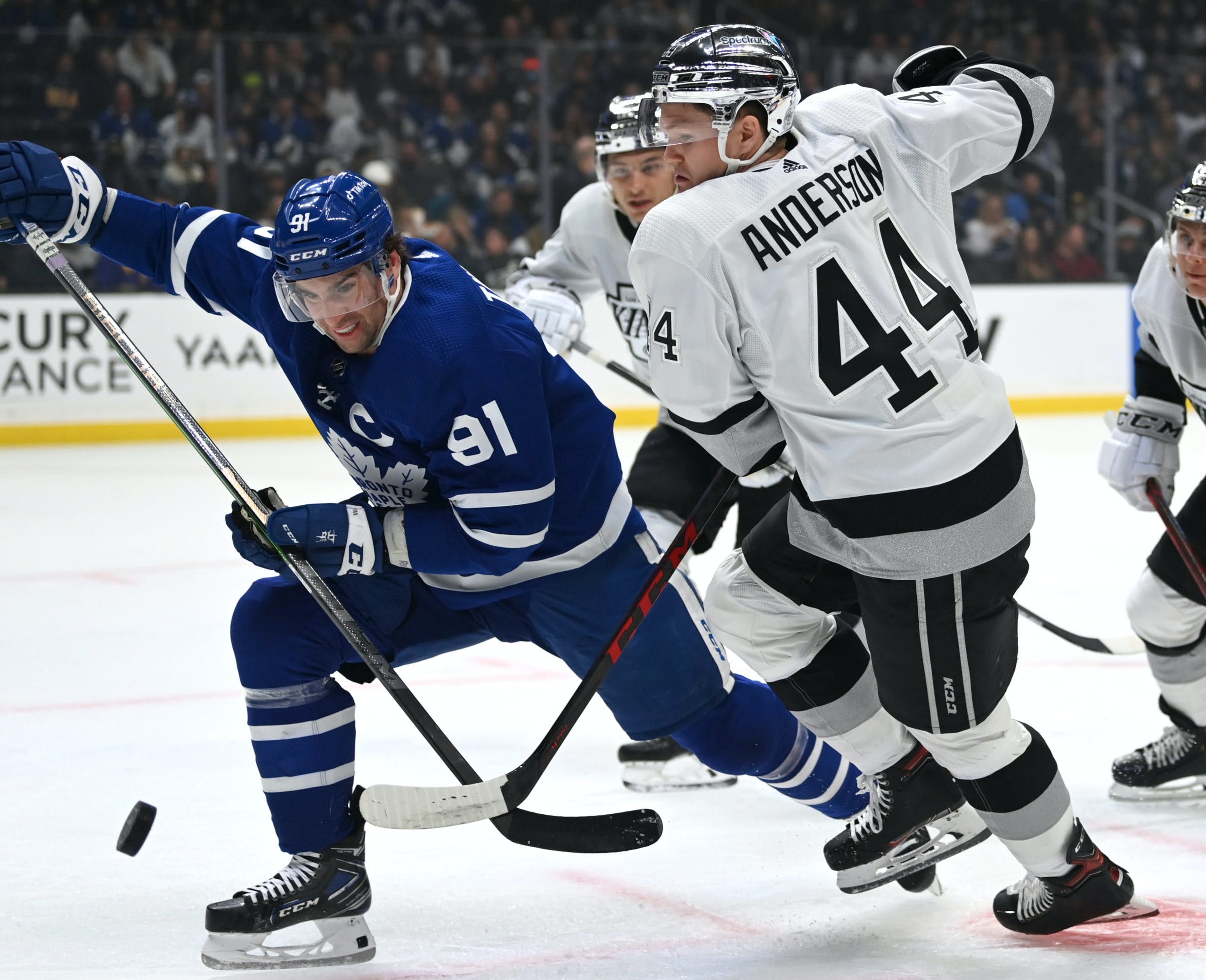 By Joseph Zita
1 year ago
Ending week six with a 2-0 loss to the Pittsburgh Penguins on home ice, the Toronto Maple Leafs were focused on starting another winning streak the following night on the road to take on the New York Islanders in their brand new UBS arena. However, prior to the loss to the Penguins, the Maple Leafs did pick up two wins during week six over the Predators and Rangers to extend their winning streak to five games at the time.
They opened up a four-game road trip Sunday night against the Islanders before they entered California to take on the Kings, Sharks, and soon to be Ducks, and the Maple Leafs played yet another great 60-minute effort against New York to pick up another win as they shut them out 3-0. Joseph Woll got the crease that night and earned his second career win, but more impressive, he earned his first career shutout that game.
After bouncing back from the loss to the Penguins with a win against the Islanders, the Maple Leafs were in Los Angeles to begin their California road trip and they did not disappoint the fans that stayed up late watching that game. With a start time at 10 pm ET, fans were obviously not thrilled about that, but Toronto did something they haven’t done yet this season which is score six goals in a single game as they picked up an impressive 6-2 win with great performances from a handful of players.
With them starting another winning streak, they were obviously looking to continue that momentum into San Jose to play the Sharks for the second and final time this season after losing to them earlier this season on home ice. Joseph Woll got the start in this one and just like the Islanders game, he was very good when called upon and helped lead the team to yet another victory to extend their winning streak to three games as they finish their road trip in Anaheim tonight to play the Ducks.

After a demotion to the fourth line, Michael Bunting has found his way back on the top line alongside Auston Matthews and Mitch Marner, and I think it’s safe to say he’s been pretty good since he’s returned back on that first line. After starting the season with six points in the first 10 games, Bunting went on a little slump as he picked up only two points in his next nine games. However, in his last three games – against the Islanders, Kings, and Sharks – Bunting has recorded four points in those three contests and has looked good in general as he’s continuing to do what we had expected him to do this season.
As we all know, he’s the type of player to go into the corners, go to the dirty areas, get under other players’ skins, and in general, be that energy guy that every team needs. In week seven, we saw that first hand as he did all that plus scored a dirty goal in front and drew yet more penalties as he’s been doing that a lot this season. Bunting picked up an assist on Marner’s empty-net goal against the Islanders and then followed it up with a goal and an assist against the Kings and another assist against the Sharks.
With four points in his last three games and 12 points in 22 games this season, Bunting’s play as of late plus Toronto’s play during this 15 game stretch is making a strong case to keep him on the top line for now, especially with Nick Ritchie looking pretty good on the third line with David Kampf and Ondrej Kase and Pierre Engvall being demoted to the fourth line alongside Jason Spezza and Wayne Simmonds.
The Maple Leafs are back in action tonight against the Ducks and then face the Colorado Avalanche and the Minnesota Wild this week so they’re going to want to keep the momentum going and play at the same level they’ve been playing at if they want to be successful during this week of games.

Returning back to Long Island to face his former team, John Tavares received yet more boo’s whenever he jumped on the ice or even touched the puck as Islander fans are clearly still upset about his decision in the summer of 2018. However, that didn’t stop Tavares from having a good week seven as he picked up four points in three games – two goals and two assists – en route to a 3-0-0 week for the Toronto Maple Leafs.
Tavares has been arguably the Maple Leafs’ best player alongside William Nylander this season and he showed it yet again last week as he helped lead the team to another perfect week picking up three wins. Although he did go pointless against the Islanders, he did pick up the four points in the final two games against the Kings and the Sharks as he was buzzing all around the ice during the first two games in California.
Currently, with 20 points in 21 games this season, John Tavares has had a great comeback story after what happened to him in game one of the first round against the Montreal Canadiens in the playoffs. It honestly hasn’t looked like he’s missed a step from game one of the season, because as I said, he’s been one of, if not their best player through the quarter mark of the season.
During these three games, Tavares showcased vintage Tavares right in front of our eyes and it was a treat to watch. Using his size to get in front of the net to redirect pucks past the goalie, or just using his body to outmuscle the defenders to score a goal right in the crease, Tavares did it all during these three games while picking up two assists as well to improve his point totals this season as I said.

What a week it was for rookie goalie Joseph Woll as he played in just his second and third NHL career games while picking up his second and third NHL wins – including his first NHL career shutout against the Islanders last Sunday – and improved his record to 3-0-0 to begin the season and his career. After starting and winning his first NHL game, Woll had the opportunity to start on the second half of the back-to-back against the Islanders and during the second game on this California trip against the Sharks.
In his first NHL start, you could tell Woll was a bit nervous. He allowed a couple of goals that you could say should’ve been stopped, but as the game went on, he made huge stops. That continued into the Islanders game where, despite only facing 20 shots and not a lot of them being really dangerous, he turned them all aside and just looked really calm, cool, and collected throughout the full 60 minutes.
In the Sharks game, I would say it was probably a game in between the Sabres and Islanders game for Woll. It wasn’t a night where San Jose didn’t create any chances, but it also wasn’t a night where they peppered Woll all game or at least the majority of the game either. Toronto played a pretty good first period and allowed eight shots on net with Woll letting one go by him. After that, Woll was literally a brick wall and denied 27 shots from the second period until the final buzzer at the end of the third period.
Woll was faced with a ton of shots, yes, but out of the 35 shots he faced, a lot of them were not high-danger chances throughout the game until the final five minutes where he made at least six saves in the span of a minute or two, including this amazing save on Logan Couture where you can see below on Twitter. All in all, a tremendous week for the rookie and it’s great to see him having success early on.
Uncategorized
Recent articles from Joseph Zita