The Leafs three stars from a week of dominant defensive play 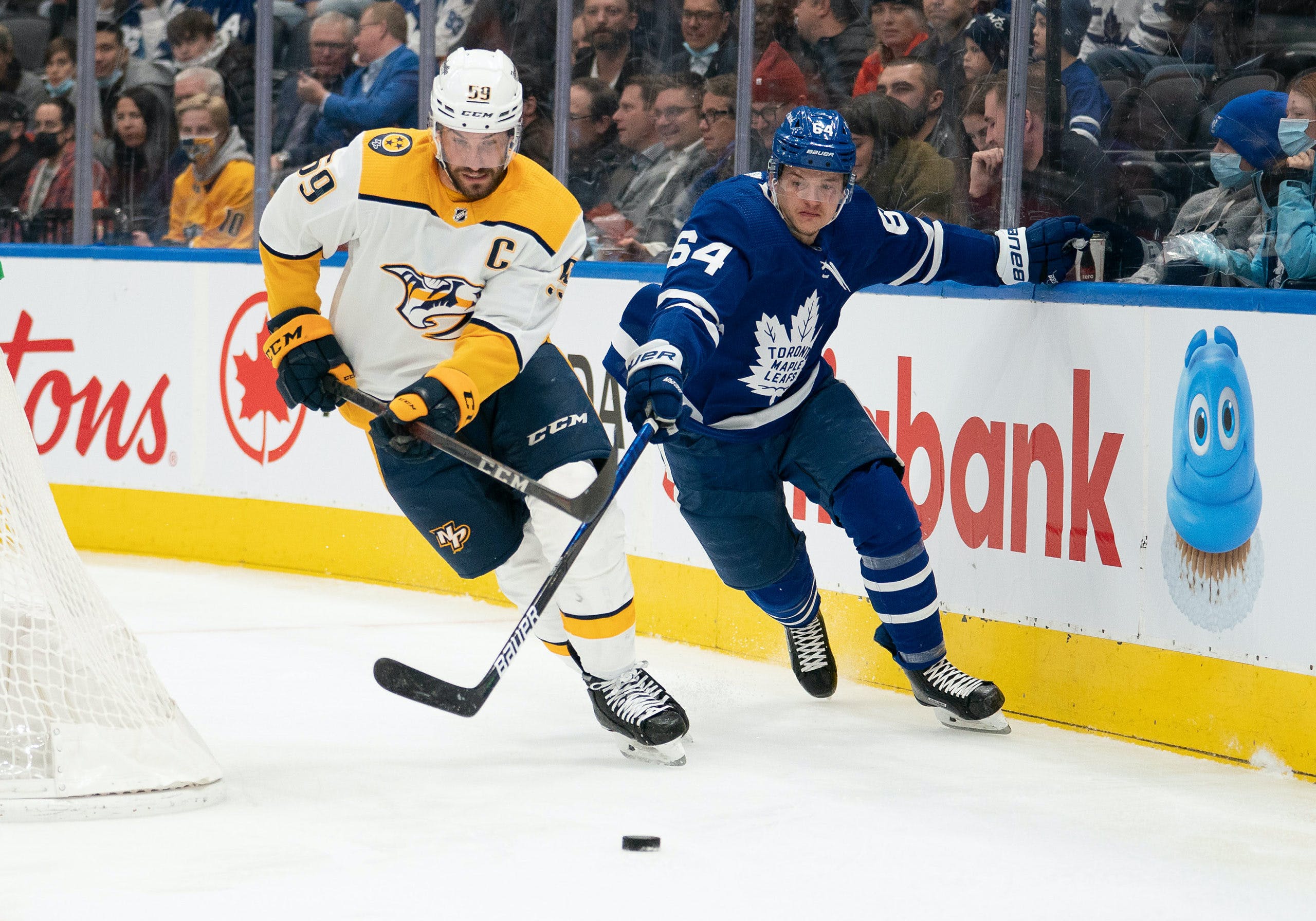 By Joseph Zita
1 year ago
After entering week five on a five-game winning streak, the Toronto Maple Leafs fell to the Los Angeles Kings 5-1 on home ice and were determined to start a brand new winning streak the next game. Well, as we know, they ended the week going 3-0-0 against the Flyers, Flames, and Sabres which gave them a three-game winning streak heading into week six. Fast forward to last Tuesday, the Maple Leafs were ready to host a Nashville team that they haven’t seen in quite some time.
With another three-plus game-winning streak currently going on for the Maple Leafs, they were looking to extend it to four games as they played host to the Predators last week. They played yet another great 60-minute effort against that Nashville team as they picked up a 3-0 win, but it was much closer than it seemed as it was 1-0 for Toronto basically all game until the last four minutes of the third period when David Kampf potted home an insurance goal and then Marner followed it up with an empty-net goal to seal the deal.
Less than 48 hours later, they were set to host the New York Rangers for the second time, and they were looking to get their revenge as they fell short to them 2-1 in overtime earlier on in the season. Well, it’s safe to say they got their revenge as they played another great 60-minute game and limited the Rangers chances through 40 minutes of play until they finally got on the board in the third period to cut the lead in half to make it 2-1. The score would remain the same until the final horn with a big thanks to Jack Campbell who stood on his head towards the end of the game.
They ended their week playing another team that they saw earlier on in the season. This time, the Pittsburgh Penguins. Just like the Rangers, the Maple Leafs were hoping to get their revenge against this Penguins team after getting absolutely embarrassed by them in Pittsburgh with no Crosby, Malkin, Letang – should I continue? They got embarrassed 7-1, let’s just leave it at that. Well, they didn’t get their revenge as they got shut out on home ice in a 2-0 loss, but it was by far a much better effort by them this time around, that’s for sure.

Making his debut as one of the stars of the week this season, David Kampf has been one of the unsung heroes on this Maple Leafs team this season, and he showed it once again this past week. For someone who isn’t looked at as an offensive threat and more so of a defensive player, Kampf – along with his line – has shown some flashes that they can create a number of great scoring chances against the opposition in games.
This week in three games, Kampf registered one goal and one assist along with stellar defense with his line as they went 2-1-0 against the Predators, Rangers, and Penguins. Kampf had only scored one goal all of last season with the Blackhawks, so fans were not expecting much from him in that department. However, he has easily tripled his goal total in about three weeks and a big reason for that is his line’s defensive play as they create their offense through their defense.
He scored a pretty big goal on Tuesday against Nashville as it gave Toronto a little more breathing room late in the third period and increased their lead to 2-0 as the Predators were trying to get back in the game late. Despite only having five total points in 19 games this season, it’s good to see him along with his line continue to generate their chances while playing responsible defensively. Although, he does have four of his five points in his last six games so that is also a really good sign to see given he wasn’t projected to give much offensively to this team.
The Maple Leafs are 10-2-0 in their last 12 games and a big reason why they’re finding so much success as of late is due to their special teams, obviously the play of Jack Campbell, but also due to their defense being so much better compared to the start of the season, especially from this third line with Kampf on it. If they’re going to continue playing at this level, or close to it every night, the Kampf line is going to be a very important part of this team going forward.

Going into their last game of week five against the Buffalo Sabres, the Toronto Maple Leafs only had one goal from their blue line which came from Jake Muzzin. That changed as Morgan Rielly ripped one bar down and out but back in the net as he grabbed the game-winning goal and became just the second blueliner with a goal this season for Toronto. Fast forward to their game against the Rangers half a week later, he pots home two more goals – one gorgeous one on the power-play – as he now has three on the year.
Rielly’s play as of late has been amazing to watch, and his contribution offensively this season has been a treat to watch, but his play this past week by collecting three points – two goals and one being a game-winner – was a big reason why the Maple Leafs picked up four out of the possible six points in their three games at home. He’s looking more and more like the vintage Rielly we’ve known with him jumping up and joining the rush, creating chances with his brilliant passes, and just, in general, looking like his old self that put up a career-high 72 points in 82 games during the 2018-19 season.
The blue line in Toronto wasn’t very strong to begin the season, but as a group, they’ve all improved in their own ways, but Rielly has pretty much been the most consistent guy back there while doing what he does on the offensive side of the puck as well. After signing his extension to remain a Maple Leaf beyond this year, it seems like he’s played even better than how he started the season, but to be fair, a lot of players didn’t play the best to begin the season.
With Toronto set to begin a little road trip tonight to play the Islanders then travel to California to take on the Kings, Sharks, and Ducks, the Maple Leafs will be looking to Rielly to continue his play in all scenarios to continue the success that the team has found as of late.

It seems like this man is always on this list of the three stars of the week and deservedly so as he’s been by far the Toronto Maple Leafs’ MVP so far this season. After coming off a second-star last week picking up two wins out of three games, he’s back on this list, this time, as the first star of the week picking up yet again, two wins out of three, but with even better numbers as he rocked a 1.50 GAA and a .964 SV% against the Predators, Rangers, and Penguins.
I feel like I’m a broken record whenever I talk about Jack Campbell and the performances he’s put up so far this season in the 15 games he’s suited up for, but it’s true, he just keeps impressing a lot of people and proving a lot of people wrong with how he has continued his play this season from the stellar year he had last season for the Maple Leafs.
As I mentioned a couple of days ago, I hope Kyle Dubas locks Jack Campbell up as soon as possible because with every game that passes by and with every stellar showing he puts on between the pipes in the blue and white, his price is going up and I think everyone realizes that. He’s in the last year of a very team-friendly deal that was signed back when he was with the Kings, so now it’s time for Campbell to earn a raise.
However, back to talking about his play from last week. It was just another classic Campbell performance as he continues to give his team a chance to win every single night and they did twice last week with impressive wins over Nashville and New York, but ultimately fell short 2-0 to Pittsburgh as some bounces didn’t go their way.
Uncategorized
Recent articles from Joseph Zita