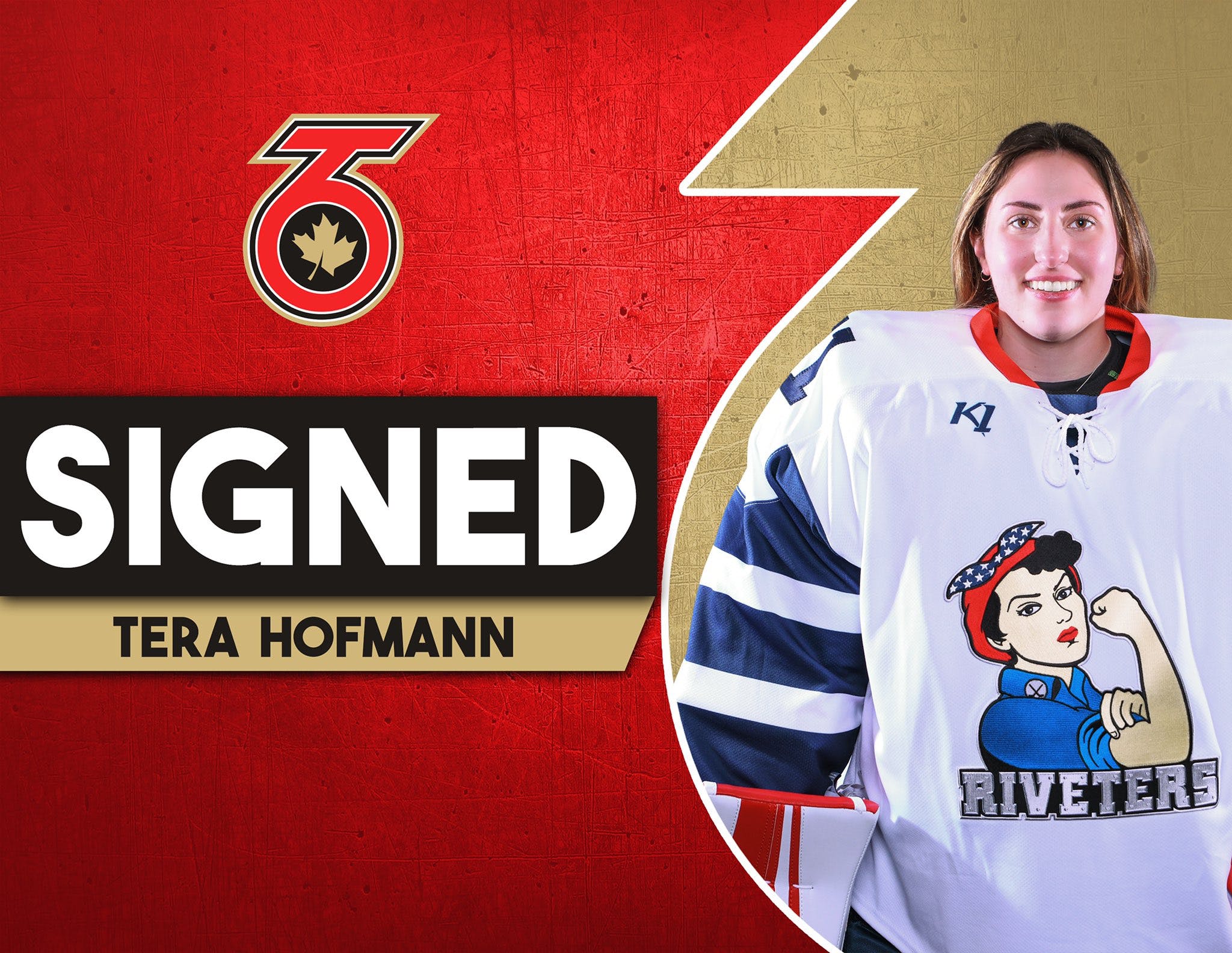 By Kyle Cushman
1 year ago
The Toronto Six have signed goaltender and Toronto native Tera Hofmann for Season 7 of the NWHL.
Hofmann, 22, was drafted in the third round of the 2020 NWHL Draft by the Metropolitan Riveters, appearing in one game last season. In the Six’s press release, Hofmann shared her excitement in returning to Toronto to play professional hockey:
“Toronto is my hometown and that’s where hockey all started for me, so I have tons of great memories as a child growing up, going to outdoor rinks with my parents, playing shinny with my sister. Just being able to come home and be a part of that community again, and especially in a season now where we’re gonna get fans, that’s gonna be really special.”
Backing up Sonjia Shelly for the Riveters in the NWHL Bubble, Hofmann’s one start came against the Connecticut Whale. Peppered with 36 shots, Hofmann held the fort as Metropolitan picked up the 4-3 victory, her first professional win.
Hofmann is the second new signing for the Six, joining her longtime teammate in defender Saroya Tinker. Tinker and Hofmann played junior hockey together in Toronto with the Durham West Jr. Lightning, collegiate hockey with Yale University, and made their NWHL debuts together with Metropolitan last season.
In the press release, Toronto President Digit Murphy said “Hofmann is a good young goaltender who has succeeded at every level she has played at. She showed a ton of promise with the Metropolitan Riveters last year in the bubble and we believe she has a bright future in the league. We are excited to add another talented goaltender to the crease this season in Toronto.”
It seemed likely that Hofmann would return to Metropolitan after her rookie season, but that came into question when the Riveters announced the signing of former Connecticut goaltender Brooke Wolejko a couple of weeks ago.
The addition of Hofmann is a fascinating one for the Six, given they’ve already re-signed both Elaine Chuli and Samantha Ridgewell from last year’s roster. Chuli will almost certainly maintain her job as the start, but the battle between Ridgewell and Hofmann for the backup spot will be one to keep an eye on come to the start of Season 7.
Hofmann is the youngest of the goaltending trio in Toronto, turning 23 in September prior to the start of Season 7. At the very least, the Six have a young, promising netminder in Hofmann that they can continue to develop over the coming seasons as a hometown product.
The Six now have 11 players under contract for the upcoming season of NWHL hockey, here is how the roster currently looks with multiple more signings to come:

Toronto’s season kicks off on November 6 again Buffalo, before they finally make their home debut at the York Canlan Ice Arena on November 20.
News
Recent articles from Kyle Cushman