Trading for Seth Jones would be a terrible idea 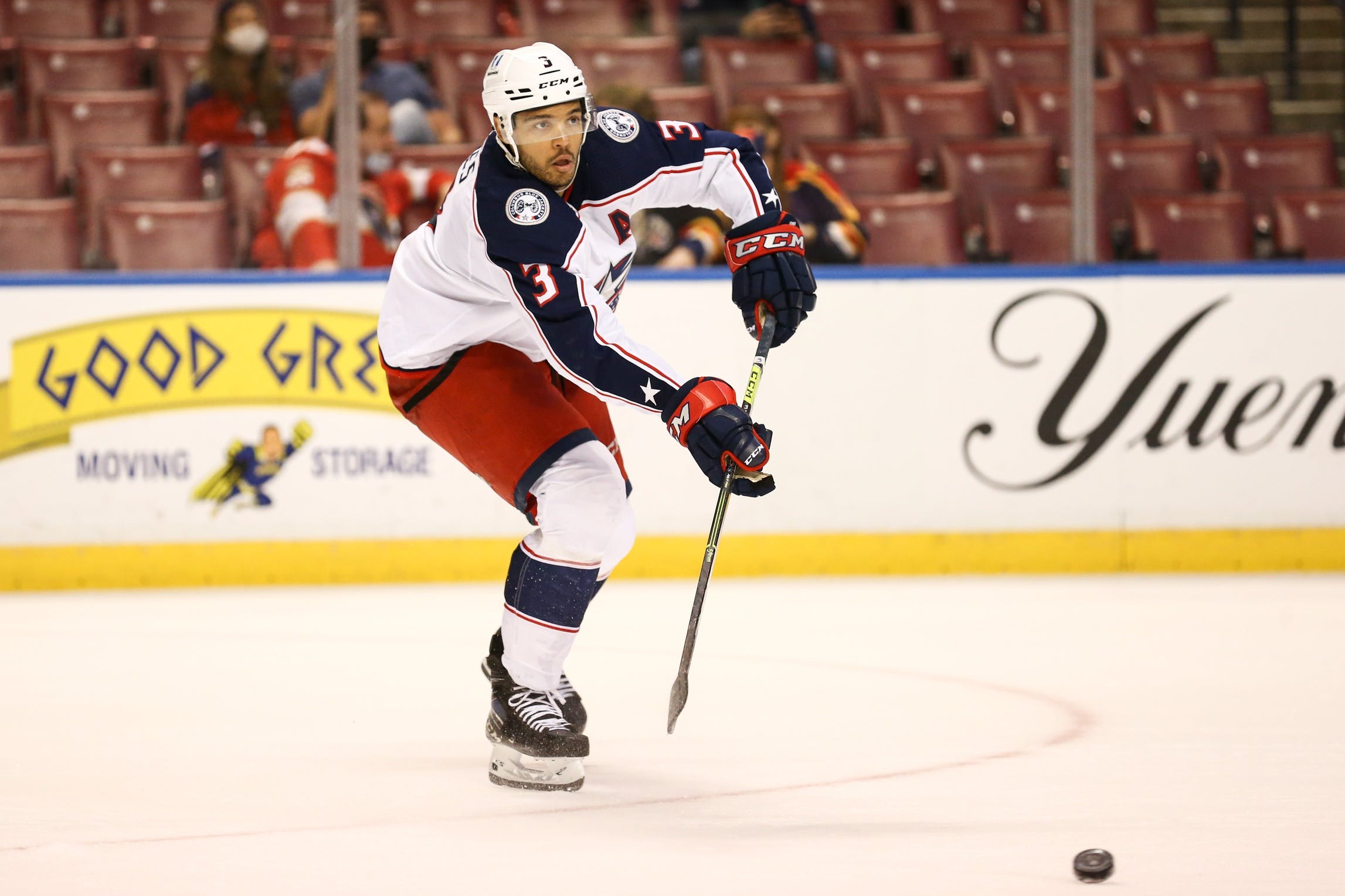 By Scott Maxwell
1 year ago
Ever since the Leafs were eliminated from the playoffs on Monday, I’ve been seeing a lot of how they should explore bringing in Seth Jones, especially since he’s made it clear with Columbus that he’s going to free agency when his contract expires. Whether that’s because he has an issue with the team, or he just wants to cash in and this is his best opportunity to do so, I’m not sure, but he’s been the talk of the town ever since.
Now, on the surface, I get why the Leafs are getting linked to him. They’ve always been in need of right shot defensemen, and Jones is supposedly a very good one. He has 286 points in 580 games, has had votes for the Norris in each of the last four seasons, and will probably get some more this season. He’s highly regarded by most people in hockey, and with the Leafs in crisis and potentially (but not likely) moving out someone in the core, they might have the pieces to make it work.
But, bringing in Jones would be a terrible idea for the Leafs. It’s an opinion that a lot of analysts and readers will think I’m crazy for, but the thing is that Jones is an extremely overrated player in today’s NHL, especially as an “all-around” defenseman. Not just that, but it isn’t a fit for the Leafs right now, both on the ice and with the salary cap.

Defense is not the Leafs biggest issue

Not knowing Seth Jones is bad, I get. But I don’t get why people could watch the Leafs play extremely well defensively against Montreal, but struggle to score, and think the problem is that they need to improve their defense.
The Leafs currently rank 5th in the playoffs in 5v5 shot attempts against and expected goals against per 60 minutes, allowing only 51.64 and 1.95 in those categories. Only six Leafs were had more than 60 shot attempts against per 60 while they were on the ice, and 13 of them had an expected goals against per 60 of less than two. Defense was not the problem, it was the lack of secondary scoring to take the attention off of Matthews and Marner, which made it easier to shut down that duo.
Now, in theory, Seth Jones could help that. Him having a lot of points could mean he helps generate offense on the back end, maybe even improving the power play, but his inability to drive possession or play defense well will probably hurt their offense more than help it, especially if he gets paired with Morgan Rielly, another defenseman who struggles defensively.
Regardless, the Leafs should be looking to improve their forward depth this offseason, not bring in another defenseman, especially when you already have a solid top four in Rielly, Brodie, Muzzin, and Holl, with Dermott and Sandin both capable options in that role knocking on the door behind them.

He’s not as good as you think he is

The name Seth Jones is one that pops out for most hockey fans because they’ve heard all about how amazing he is. Whether it’s his draft pedigree, his high ice time totals, his point totals, or his Norris votes (including finishing fourth in 2017-18), he has all the right things to jump out as a great defenseman in the eyes of the average hockey man. The problem is that beyond the surface level, he’s not good.
Now, for a while the conversation was that his underlying numbers suggested that he was an okay defenseman, just not as elite as the hockey market thinks he is. However, that has completely changed this season, where it has dropped to the point that he is just not good, period.
Jones’ play in Columbus was another level of bad this season. He finished the year with a -5.8 goals above replacement, the 12th worst to the league. That translates to a -1 wins above replacement, basically meaning you would actually get one more win out of your team if you replaced him with a replacement level defenseman. It gets even worse when you look at his defensive goals above replacement, which ranked 11th worst with a -4.4, and is among the likes of players notorious for their poor defensive play, like Patrick Kane, Phil Kessel, Leon Draisaitl, and Tyson Barrie. Not a good look.
You could argue it was from playing on a bad team this year, but his Regularized Adjusted Plus-Minus, which isolates a players numbers from different factors that impact their play like quality of teammates and competition, they were quite bad this year. Now, a lot of his defense partners weren’t much better, but this indicates that this is more so just that their entire blue line sucked this year, not that Jones suffered because of a bad blue line.

If that doesn’t quite sell you on it, here’s his RAPM from the last three years, including two years where he played on an “elite defensive team” with a strong blueline. It’s not much better.

As for his microstats, Jones actually doesn’t fair too badly. Whether it’s zone entries, generating offense off of shots and passes, zone exits, and more, Jones isn’t really bad at any of them, although he more or less ranks out as above average to good at in most of them. He doesn’t hurt the team in that regard, but he isn’t crazy good either. And the thing with microstats is that they don’t matter a ton from a player evaluation perspective if his macrostats still come out as bad. Microstats help add context to their game and skill set, but if the results aren’t there year after year, there’s a problem. This more or less just explains why people who just use the eye test think he’s still a good defensemen. He has the tools, he just doesn’t know how to use it properly to become an effective defenseman.

His market value is significantly higher than his actual value

This is where “don’t trade for Seth Jones” becomes even more important. Jones is viewed as one of the best defensemen in the league, even though everything I pointed out in the last section suggests he isn’t. As if bringing in a defensemen who has a negative on-ice impact is bad enough, the Leafs would have to pay a premium price to get him and keep him around.
While there hasn’t been any word yet about what kind of package Columbus will be looking for in return for Jones, but it’s safe to say that a player as well-received as he is will probably have a high asking price. It would probably cost the Leafs at least a first round pick, and probably one of the big prospects as well, and then one of the lesser roster players like a Travis Dermott or Alexander Kerfoot. You might not worry about it too much about losing futures if you think he helps your Cup window now, but considering the fact that he won’t, and that one of the biggest reasons the Leafs have depth problems is that the Mark Hunter draft years gave them almost no prospects to come up and fill out that depth, it will probably hurt them more than help them.
The other possibility is that if Dubas and Shanahan are looking to deal one of the big four despite their locker clean out comments, Jones could be a piece that goes the other way for Toronto. But, the problem with trading a player of Matthews, Marner, Tavares, or Nylander’s calibre is that you rarely win those trades, and even more rarely get an asset of that same calibre. Including Jones in a deal like that will not only be a poor asset coming back for one of them, his market value will view him as a player of that calibre, meaning they won’t get a whole lot else in that package.
Oh, and this would only be for one year of him. His contract is up after this season, and the Leafs would have to re-sign him after that. According to Evolving Hockey’s contract projections, Jones would currently get a five year contract with a $6,952,000 AAV. The Leafs don’t have the cap space to bring in that kind of piece without basically getting rid of every contract between $1-5 million, or getting rid of one of the big four up front or the big three on the back end, which again, would not be worth it to keep Seth Jones around.
To wrap it all up, this idea is just absurd, and it more or less goes to show how many people actually pay attention to both the Leafs and Seth Jones. Improving the blueline is far from the biggest problem for the Leafs, bringing in Jones wouldn’t even be an improvement, and between both his poor on-ice impact and how much it would cost to bring him in and keep him around, it would not be a smart move, and would in fact likely end up being one of Kyle Dubas’ worst moves as a GM if it happened.
Seriously, don’t do it.
Uncategorized
Recent articles from Scott Maxwell