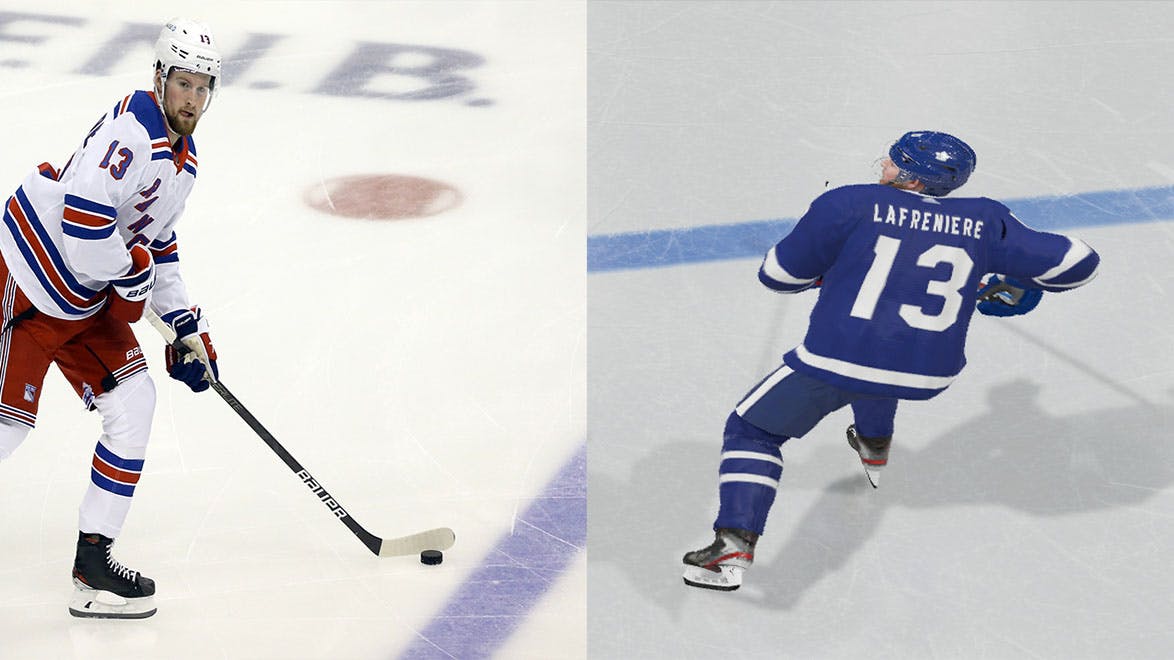 By Michael Mazzei
1 year ago
Unless you have been living under a rock the last few weeks, you would probably know that the Leafs have gotten off to a hot start for the 2021 campaign after surpassing the 10-win mark this week. Despite numerous key players going down with long-term injuries, they have had solid production from most of their forwards and are one of the highest-scoring teams in the NHL.
And it could have been even higher had Toronto had a bit more luck during the 2020 NHL Draft Lottery, where you may recall the ping pong ball did not bounce favourably.
Because of the New York Rangers’ incredible luck, they won the first overall pick which they made the tough choice to select @Alexis Lafreniere. He was expected to join a Rangers team that was on the rise and provide them with the offensive jolt needed to carry them into contention. So how has he done in Manhattan so far? To say he has been struggling to produce would putting it mildly as he only has one goal (an overtime winner) in his first 11 games and has had trouble generating many scoring chances (Per Hockey-Reference.com).
This lengthy drought is obviously not going to last and Lafreniere is eventually going to kick his production up a notch, but it’s fair to say that he has been a disappointment to begin the 2021 campaign (RIP to those who took him in fantasy). But what if we could go back in time and alter the way the ball bounced so that it was the Leafs that landed the first overall pick instead of New York? That’s the exact thought I have had in my head the last few weeks and decided to see how Lafreniere would fair in Toronto using NHL 21.
This will be a one-year simulation where I follow the same rules I have implemented for the career sim articles I have previously done. Here are the four entries if you want to catch up:

Here are the rules that I will be following:
To get Lafreniere on the Leafs, I adjusted the rosters so that the Rangers got @Alexander Barabanov in return because I think that is a fair return. With the 2020 first overall pick added, here’s what the Leafs forward lines look like:

And here are Lafreniere’s stats, with him starting off at 82 overall:

To my disappointment, EA Sports has still not updated Franchise Mode to set the 2021 season to the 56 game schedule actually being used. So we’ll have to settle for the traditional 82 game campaign instead.
It was a strong regular season for the Leafs as they comfortably finished second in the Atlantic Division with a 54-23-4 record and were four points behind the Boston Bruins for the President’s Trophy. Lafreniere had a solid rookie campaign as he recorded 23 goals, 29 assists, and 52 points in 68 games which had him seventh on the team in scoring. He also finished just a single point behind @Kirill Kaprizov for the lead in NHL rookie scoring. Had Lafreniere played the entire year healthy, he would have finished with 62 points. If you’re wondering, Barabanov spent the entire season in the AHL.
The playoffs went exceptionally well as the Leafs finally exorcise their first-round demons by eliminating the Buffalo Sabres in seven games and they carried that momentum all the way to the Stanley Cup Finals. There they matched up with the San Jose Sharks and went the full distance before getting to hoist Lord Stanley’s trophy for the first time since 1967.

Lafreniere (who has improved to 83 overall) stepped up his game big time in the postseason as he registered five goals, 15 assists, and 20 points in 27 games played. Despite this impressive showing, it was only good enough for fourth in team scoring as @Auston Matthews dominated with 32 (!!!) points to win the Conn Smythe Trophy.
At the NHL awards ceremony, Lafreniere’s impressive rookie campaign was cemented with him taking home the Calder Memorial Trophy.

Long-time readers of my simming series would know that the Leafs have had extremely poor luck in terms of winning Stanley Cups (much like in real life) and very rarely make it as far as the third round. So when I saw the popup that the Leafs really did the thing, I burst out laughing and then cried “Why couldn’t the other simulations have this much luck!”
Championship drought aside, I say this one-year simulation went solidly for all parties involved as Lafreniere produced well and was able to win the Calder. The fact that the Leafs were not only able to turn an incredible regular season into a Cup run was just the icing on the maple cake. It’s fair to assume that Lafreniere and the team would have only gotten better had I decided to do a full-career sim instead.
On the Rangers side of things, they made the playoffs but were bounced in the first round by the Washington Capitals. Barabanov spent the entire season with the Hartford Wolf Pack where he recorded 57 points in 76 AHL games before also getting eliminated in the opening round. So New York got shafted hard by the simulation and is left with a player who in reality is on the fringes of the Leafs roster.
It goes without saying that the results of the sim are not definitive proof of what would have happened if the Leafs won the draft lottery. This is a video game and the results will always change the more times you run it. I hope you did get a kick out of the results and boast how much better Toronto would be with Lafreniere in the lineup.
I’m sure Rangers fans are going to love the results of this simulation. Now watch Lafreniere goes a multi-game point streak because of this article’s existence.
Uncategorized
Recent articles from Michael Mazzei