“Watch me out there”: Jason Spezza returns to the ice as a player six months after his last NHL game 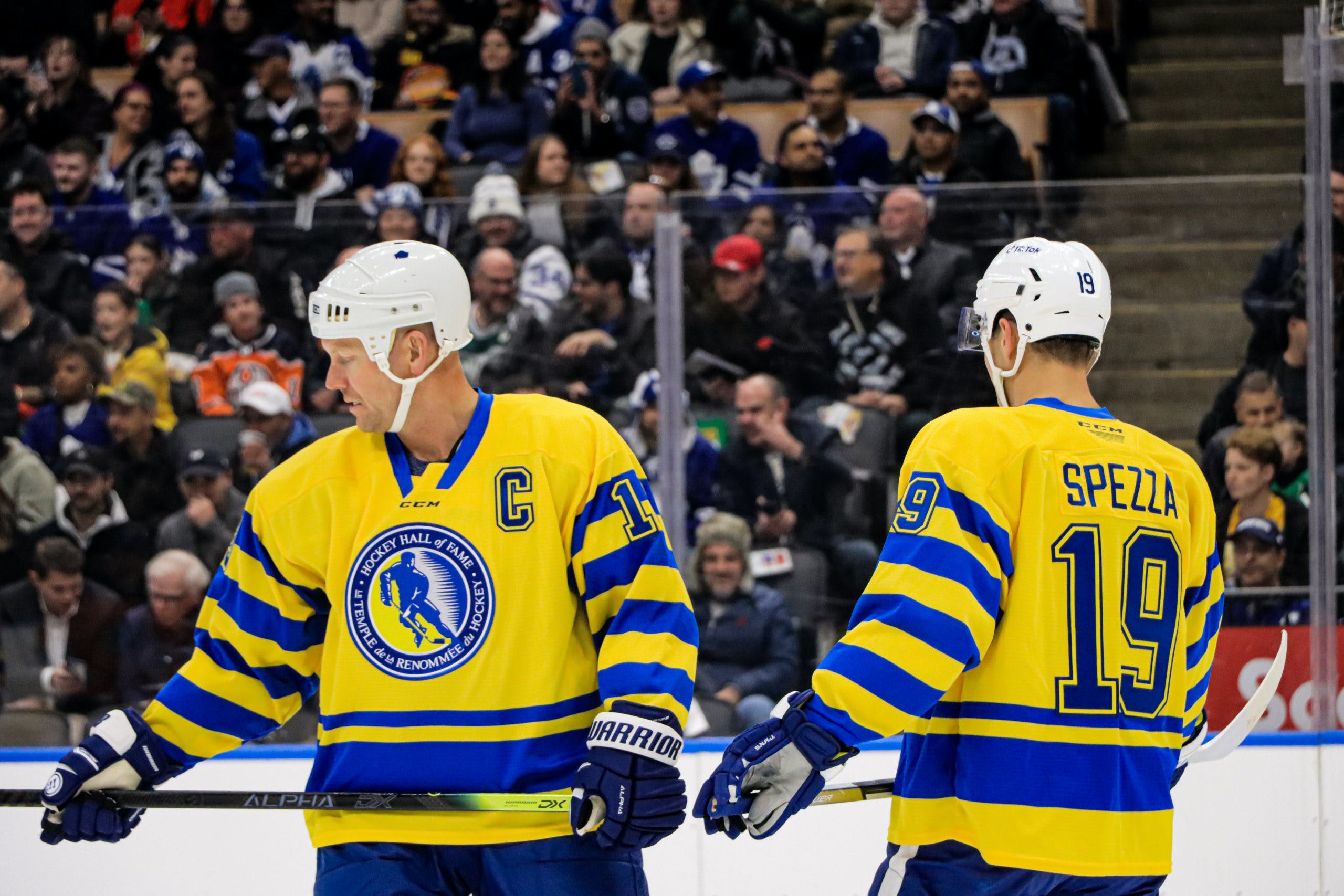 By Michael Mazzei
16 days ago
May 14th, 2022.
That was the day Jason Spezza played the final game of his NHL career. Over 48 hours after registering his last career point (assisting on a John Tavares goal), Spezza gave it all he had to try and help the Leafs secure their first trip to the second round in nearly 20 years.
Unfortunately for him and his boyhood team, they were unable to break through as the Lightning sent them packing on that fateful day. He would subsequently retire from the league roughly two weeks later and take up a new role as a special assistant to Kyle Dubas.
Nearly six months after he played his last NHL game, Spezza took part in the 2022 Hockey Hall of Fame Legends Classic as a member of Team Sundin on Sunday afternoon.
Donning his Leafs’ helmet and gloves, he was upbeat and relaxed as he chatted with his former teammates and opponents during warmups. He could not wipe the smile off his face as the crowd at Scotiabank Arena cheered him on loudly when he was introduced. As for the game itself, Spezza did not skip a beat.
While the stakes for this game were not as high as the last time he skated at Scotiabank Arena, Spezza felt good being back on the ice.
“A little different intensity, but fun to see the guys,” he said. “It’s always great to see old friends, so it was a nice day.”
His skating was fluid, his passing remained sharp, and he was always a threat every time he shot the puck. He even shared the ice with Mats Sundin, and although that partnership may not have resulted in points, it provided the crowd with a unique chance to see former combatants of the Battle of Ontario join forces.
While it did not translate into a win for Team Sundin as they lost 10-6 to Team Lindros, Spezza’s performance mere months removed from retirement left a positive impression on the crowd in Toronto. Nik Antropov, who skated for the winning side, was one such player who felt Spezza had not missed a beat.
“We talked to him about two weeks ago. He was so nervous to get into this game,” Antropov said. “He still can play for sure.”
A lot of credit for his performance on Sunday goes to the fact that Spezza’s work schedule since joining the Leafs’ front office has remained relatively similar to when he was a player. He continues to train each day while also working closely at the rink with Dubas, with whom he described their working relationship thus far as “very good.”
Asked what he would say if the Leafs’ general manager were to approach him and ask if he wanted to rejoin the team, he said with a grin: “Watch me out there.”
But the Legends Classic was not about him trying to work his way back into the NHL. The festivities gave Spezza an opportunity to renew friendships and experience the comradery in the dressing room with his fellow alumni.
Spezza spoke about how he ran into Dany Heatley while he was in California and the fact that he and Daniel Alfredsson have been chatting more frequently these days. Reconnecting with his former teammates was one of the things he was most excited about upon embarking on his post-NHL career.
“When you’re playing, there’s a disconnect between the guys that are retired and the guys playing,” he said. “So it’s one of the things in retirement I’ve looked forward to is getting back in touch with my old teammates and seeing them when they come through town.”
Spezza adjusted his work schedule to attend the Induction Ceremony and subsequently did not join the Leafs in Pittsburgh for their game against the Penguins, which he said the team was more than understanding. He accompanied Monday night’s event with his family and ex-Senators teammates in support of Alfredsson getting inducted into the Hockey Hall of Fame.
Getting a chance to see his former linemate achieve one of the sport’s biggest honours and gain some well-earned appreciation from the hockey community was special for him.
“It’s nice to see him get the recognition,” he said. “His ex-teammates had hoped that he was gonna get into the Hall.”
“It’s an honour for me that he asked me to come and I’m happy to be a part of it.”
Editorials
Recent articles from Michael Mazzei