What to expect from a Spencer Carbery-run Leafs PP 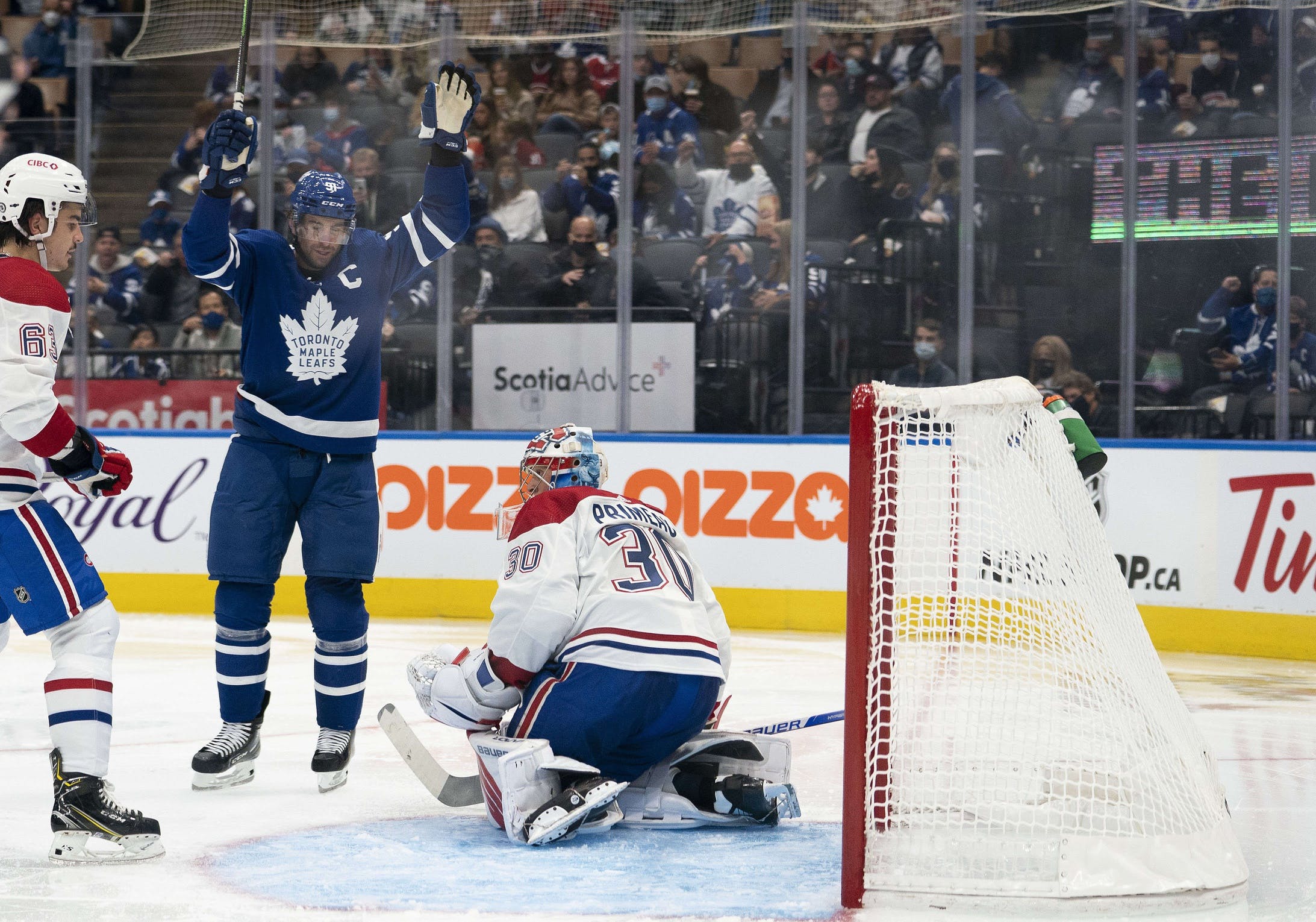 By Mark Norman
1 year ago
Powered by InStat
One of the most puzzling things about the Maple Leafs last season was their Jekyll & Hyde powerplay. Fans scratched their heads at how the Leafs could go from having the second-best powerplay in the first half of the season to having the second-worst in the last half, especially with the offensive talent they were throwing over the boards every man advantage.

That it took less than two months for opponents to figure out the Leafs’ powerplay was concerning. That no significant adaptations or changes were made to the team’s special teams strategy was utterly bewildering. Opponents quickly keyed in on the fact that the Leafs powerplay ran through the top of their umbrella formation, which consisted of @Mitch Marner, @Morgan Rielly, and @Auston Matthews. The opposition overcompensated towards Matthews to take away his shot, daring Marner or Rielly to take non-dangerous shots from far out. It worked, as Marner and Rielly combined for just one powerplay goal all season, courtesy of Rielly.
The Leafs passed and passed and passed and passed the puck around the top of the zone trying to open Matthews up for a shot that was seldom uncontested, often resulting in a shot by Rielly that hit shin pads or a failed cross-ice pass by Marner that was cleared. The unit’s movement was stagnant: you could throw a small blanket over the area of the offensive zone where each player skated, as if locked into a track on a bubble hockey table.
When the opposing team cleared the puck down the ice, the Leafs struggled to re-enter the offensive zone. The Leafs’ zone entry attempts almost always involved a drop pass or two that the opposition knew was coming and had planned for. Penalty killing units clogged up the neutral zone as the Leafs charged head-first into a wall of defenders, often turning the puck over at the opposition blueline or giving away possession on a forced dump-in.
It was hard to watch in the second half of the season, as the Leafs capitalized on just five of their 72 powerplay opportunities for a success rate of 6.9%. To really put that into perspective, they allowed five shorthanded goals during the same timeframe for a net differential of zero.
Naturally, Leafs fans pointed their fingers at the man who was running the Leafs powerplay, new assistant coach Manny Malhotra. But the blame should also be shared by Sheldon Keefe, whose responsibility it is to identify problematic trends and work with his coaching staff to fix these issues. The Leafs coaching staff seemed to take a “they’ll figure it out” approach with the powerplay last season, and “they” never did.

So it came as no surprise when the Leafs announced changes to their coaching staff’s accountabilities earlier this week. Newly-hired assistant coach Spencer Carbery will be taking over powerplay duties, with Malhotra transitioning into a more ambiguous bench role without any clear responsibilities.
So who is Spencer Carbery? Carbery has spent the last decade behind the bench of ECHL, OHL, and AHL teams, most recently with the AHL’s Hershey Bears from 2018-19 to 2020-21. Hershey won the Macgregor Kilpatrick Trophy last season as the team with the highest points percentage, earning Carbery AHL Coach of the Year honours.
One thing you may be surprised to learn about the Leafs’ new powerplay coach is that Carbery’s Bears never finished above 12th in powerplay success rate in any of his three seasons behind the bench. In his three years with the Bears, the team finished 15th (18.5%), 23rd (16.0%), and 12th (18.8%) in powerplay percentage, for a cumulative rate of 17.8%.
It’s hard to determine just by looking at the numbers if the reason for Hershey’s pedestrian numbers on the powerplay is the result of systems or talent. Thanks to InStat I was able to acquire some footage of some of Hershey’s powerplays last season, to see what sort of tactics they employed. This should give us an idea of what strategies the Leafs may employ with the man advantage this year.

Puck movement/strategy
The first clip of three in the video below shows a 3F-2D deployment on a 5-on-3, which is interesting. Hershey stretches out Wilkes-Barre’s 3-man unit by using high-to-low passes. Their defencemen are prone to switch mid-powerplay to gain new shooting options and strain the opposition’s penalty-killing formation. In contrast to what the Leafs were doing last year, Hershey uses their down-low options more frequently, and a higher percentage of their chances are created from passes to the slot from beneath the circles.
In the second and third clips, keep an eye on #21 (Joe Snively) in the bumper position. This is what @Mitch Marner will be asked to do this season. Snively is in constant movement around the interior of the opponent’s PK box, simultaneously supporting the puck carrier while also trying to find open ice to present himself as a one-timer option in the slot. It is apt that Snively wears #21 as this is exactly what @Brayden Point does on Tampa Bay powerplays: roaming the middle. Using your bumper this way not only has a gravitational effect on penalty killers who are forced to stay with a moving target, but also creates unpredictability and chaos, which are critical to breaking down structured PK units.
Zone entries and drop passes
The drop pass, a common target of derision from Leafs fans, certainly will not die under Carbery. What we may see less of, however, are those which occur near centre ice.
On entries, one thing you’ll note is that Hershey frequently makes lateral saucer passes near the blue line to enter the offensive zone from the boards, rather than through the middle. The passer then splits the D and drives hard to the net for return passes.
Below are two clips where drop passes are used poorly. There’s not much to say about the first clip other than the fact the puck carrier skated himself into trouble then panicked. Wilkes-Barre anticipated the puck drop perfectly here and sprung an effective trap along the near-side boards.
Clip 2 shows an example of a player who has plenty of open ice ahead of him but opts for the drop pass, killing both his own momentum and that of his teammates. #38 had plenty of room here to continue to charge up the middle and take the ice Binghamton had given him.

Perhaps when given some of the most talented hockey players in the world, Carbery can squeeze more out of them than Malhotra did last season.
From the sounds of things, he’s already shaking things up:

From the looks of what they showed off, Carbery will have Marner and Nylander occupying new positions on the power play. It appears Marner will slide to the bumper position, from the half-wall spot he’s played for some time. Nylander looks destined to replace Marner on the half-wall. (Jonas Siegel, The Athletic)

This is welcome news. Nylander in the Marner spot on the powerplay gives the opposition a second shooter they need to respect, and Marner in the bumper spot not only gets him closer to the net should he elect to shoot, but also places our best, most intelligent playmaker in one of the most dangerous places on the ice, with plenty of options to choose from.
Nylander already manufactured a goal from his new spot on the powerplay not even halfway through the first preseason game of the season, so that definitely bodes well for the Leafs:
All in all, what you can expect from the new-look Leafs PP:
One thing Carbery will need to account for is properly leveraging Matthews’ world-class shot, which is something he did not have with Hershey. How Matthews fits into how Carbery wants his powerplay unit to play will be interesting to see once Matthews returns to the lineup at the beginning of the regular season.
So there you have it, a glimpse into the mind of our new powerplay coach. Beware not to get too excited about early-season success on the PP, which is a Leafs tradition. How the unit fares through the rest of the season, after teams have adapted to it, will be the true test of this new approach.
Uncategorized
Recent articles from Mark Norman