What to expect from the Toronto Marlies this season 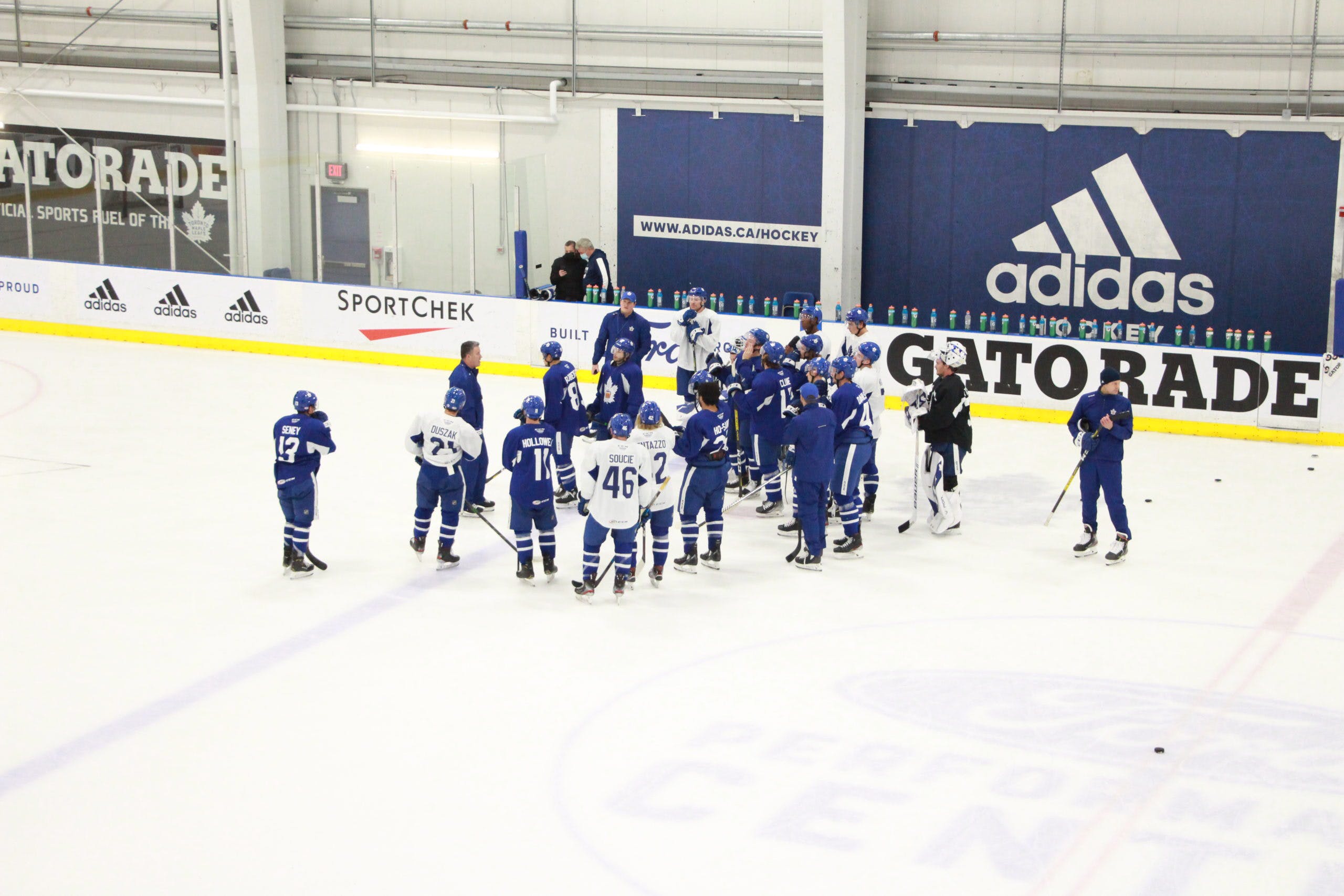 By Nick Barden
1 year ago
The Toronto Marlies’ season begins this Saturday, and questions remain about their starting lineup.
The top-end of their lineup looks pretty set with players like @Josh Ho-Sang, @Nicholas Robertson, and @Semyon Der-Arguchintsev, likely playing a lot of minutes.
However, there are also a few players who’ve arrived via the Toronto Maple Leafs in the last few days in @Kurtis Gabriel, @Kirill Semyonov, and @Alex Biega. Each of those guys will likely challenge for a spot in the top-six too.
What’s most intriguing about this season is that it’s still mostly about development.

“It’s still development.” Marlies head coach, Greg Moore, said on Friday afternoon. “At this level, we still need to win games, we need to be competitive. Hopefully within our model and taking care of our processes each day and how we’re getting better and how we’re developing, the results will take care of themselves.“

A lot of the American Hockey League is about development, especially right now. Last season, the Leafs organization was able to have Robertson at that level. Without COVID-19, that wouldn’t be possible at the AHL level.
And now, during this season, post-COVID, we could see a line consisting of Robertson, Der Arguchintsev and Ho-Sang.

“They’re all very creative players.” Said Moore after Friday’s practice when asked about the three on a line together. “It’ll be interesting to see how it roles out when you have some really creative, free-thinking players in the same line. Sometimes it doesn’t jive because they’re all hard to read off of each other or sometimes you’re on the same wavelength and can anticipate each other because they think similarly. So, we’ll see how it goes, but it’s exciting to see how much skill is on one line.“

One interesting note, though, is that Der-Arguchintsev didn’t play this weekend in the Marlies’ two pre-season games. It was Marc Michaelis who filled in between Robertson and Ho-Sang during Sunday’s game. He’s been taking line rushes with the two throughout training camp and could be another player who slots in between them.
Michaelis, who’s 26-years-old, spent last season with the Vancouver Canucks playing in 15 games and not registering a single point. Before that, he spent four years with Minnesota State University, tallying 162 points in 148 games.
He doesn’t have a lot of experience at the pro level, but he appears to have some upside if he can put it all together.
Moore said not to look at Sunday’s lines and think that they’re anything of meaning. But he did hint at it being a closer look at a lineup heading into the season.
This was the Marlies’ forward lines on Sunday afternoon:
Robertson-Michaelis-Ho-Sang
Seney-Abramov-Anderson
Kopacka-Douglas-Gogolev
Clune-Chyzowski-McKenna
The big piece missing here is Der-Arguchintsev. But this is closer to an actual AHL lineup. Again, though, Moore said to not speculate, so we won’t.
But Chyzowski, Gogolev, McKenna, Michaelis, Douglas, Kopacka, and Abramov each played in both games this past weekend.
It’ll be interesting to see how it shakes out heading into Saturday’s home opener.
The Marlies’ defence core is another part of their lineup, which has a lot of bodies.
On Sunday, this was Toronto’s pairings:
Dahlstrom-Menell
Rubins-Hollowell
Kral-Duszak
Missing from that lineup is @Noel Hoefenmayer, @Riley McCourt, @Teemu Kivihalme, Matt Hellickson, and @Alex Biega. Biega, most recently, was sent down to the Marlies via the Leafs, so there’s reasoning as to why he’s not in the lineup. Hoefenmayer and McCourt, I suspect, will be off to Newfoundland.
Once Biega and Kivihalme are in the mix, it begins to get interesting.
Moore, last week, said that he thought Kivihalme was one of the most improved defencemen from the Marlies last season.

“Obviously, he led our d-core in goals.” Moore said on Thursday, “He’s such a powerful skater. He also had a lot of improvement in how he transitions the game, neutral-zone regroups, being calm under pressure while there’s pressure on his back, like skating towards his own net and be able to transition and make plays off people’s heels. And then, with the goal-scoring I was talking about, being more of a threat at the blue line, attacking down and being more present at creating offense.“

What I get from this is that there’s still a lot of spots open for the taking, especially on the top-pairing. It’s a lot of competition, which is good for a team to have. It’s similar to the forward group where you have all of these spots, but you’re waiting for someone to take them.
Moore said that Rubins is challenging for a top-pairing spot. Moore also said Dahlstrom should have a veteran role, similar to what Calle Rosen had last year.
I believe all three of Rubins, Kivihalme, and Dahlstrom will make up the top-six on the left side. The right side will likely consist of Biega, Duszak, Mennell, Hellickson and Hollowell in some fashion.
The point is — there’s a lot of players.
At goaltending, three players will be with the Marlies: @Michael Hutchinson, @Eric Kallgren, and @Joseph Woll (once he returns from injury). It was a surprise that Hutchinson cleared waivers because of the season he had last year. However, it works out incredibly well for the Leafs and Marlies to have a veteran like him down there.
I’m not too sure how it’ll shake out, but until Woll returns, I believe Hutchinson and Kallgren will be a tandem.
The season, though, is right around the corner. I will be doing my best to cover the Marlies as much as possible. They play back-to-back games on Saturday and Sunday to begin the season.
Who are you looking forward to watching on the Toronto Marlies this year?

After signing up for a free account, we’re going to give you a bunch of boxes with player names and you’re going to pick a name from each box until you’ve put together a super crew that you think can contend for a NationDrafts championship. Seems easy, right? It is easy and that’s not just because you’re wicked smaht. Sign up for FREE right here.
Uncategorized
Recent articles from Nick Barden