What you need to know on Leafs’ Rubīns, Steeves, and Biega 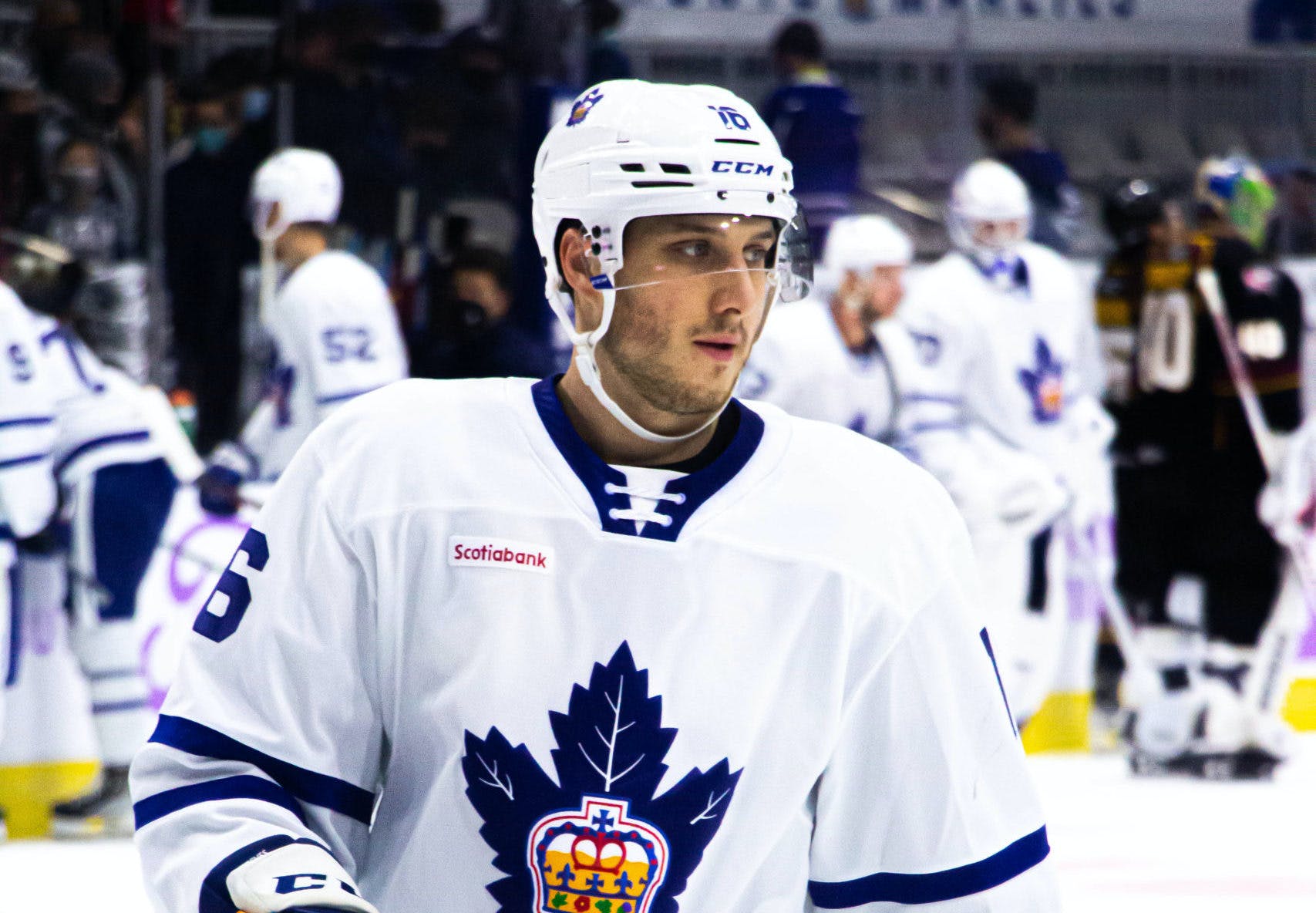 By Nick Barden
1 year ago
As the Leafs season moves along, the injuries have started to build up. With @Mitch Marner, @Travis Dermott, and @Rasmus Sandin out, the newcomers of Alex Steeves, @Kristians Rubins, and @Alex Biega have arrived.
I’ve spent a lot of time around the Toronto Marlies this season, watching each of these players a considerable amount. On Tuesday, Rubīns and Steeves got to live out their childhood dream.
Playing in the NHL.
Steeves entered his first NHL game on the fourth line with @Pierre Engvall and @Kyle Clifford. Rubīns was on the bottom defence pairing with @Timothy Liljegren. Biega didn’t play, though it’s always possible he gets slotted into the Leafs’ lineup in the next few games.
For now, though, I’m going to give you a bit of a lesson on each of these players.

I spoke with Rubīns a few weeks ago about making his dream a reality. When I asked him about his call-up to the Leafs, he sort of downplayed it as just a morning skate. But the Leafs were letting him know that he’s come a long way.
I’m not sure if he thought this was a possibility when I spoke with him, but it’s finally happened.
Rubīns is a very big defenceman at six-foot-five, 227 pounds. But he doesn’t allow his largeness to affect the way he plays. The 23-year-old is a fast, smooth-skating player who uses it to his advantage. Being able to have that speed, Rubīns can move up and down the ice quickly.
His skating also allows him to be in the correct position at all times.
With such a big body, he’s able to shield almost any player away from the net. Watching him at practice — unless there’s a player who’s similar in size — they’re not getting to the net.
The 23-year-old has come a long way since signing with the Newfoundland Growlers in 2018. Now, he’s someone who Marlies head coach, Greg Moore, relies upon every game.
“It’s great. I’m really excited for him,” said Moore on Tuesday before Rubīns’ debut. “Having gotten to know him over the last couple years, he’s a very impressive human being with how he builds relationships with his teammates and staff, how he approaches his work every day, how he competes, and I’m happy for him.”

The two things you notice right away about Steeves are his speed and shot.
When you watch him skate, it seems as though he’s almost shot out of a cannon. The 21-year-old has incredible speed and is one of the fastest players on the Marlies.
Steeves’ shot can beat goalies in almost any way possible. His wrist shot is very deceptive, and he can usually put it anywhere he wants.
One part of his shot that he’s worked on a lot throughout practices this season is his slap shot. Steeves is only going to become better if he can add to his arsenal.
At the beginning of the AHL season, the 21-year-old was out with a shoulder injury suffered in the Traverse City Rookie Tournament. As he got closer to returning, he mentioned that he wanted to enter the AHL and “dominate.”
It’s safe to say he’s done that.
When he entered the Marlies lineup, it seemed as though he had already played a year or two in the AHL. Steeves fit right into the league, having six points in his first four games.
“The first thing I noticed about him [Steeves] was his shot,” said Matt Hellickson, who was a teammate of Steeves’ at Notre Dame and now with this Marlies. “He uses kind of a longer stick and it looked kind of goofy, I felt, when I first skated with him. But after I started seeing him shoot the puck, I was like ‘Wow, he’s got a nose for the net.’ So it was pretty early on when I noticed he had something special.”

The 33-year-old has been on many teams in his 11-year professional hockey career. He spent time with the Vancouver Canucks and Detroit Red Wings. He also spent time playing with their perspective AHL affiliates. Since 2015, Biega has played 241 NHL games and 80 AHL games.
While playing with the Marlies this season, and even throughout his career, he’s been nicknamed Bulldog.
The reason behind why Biega is given that nickname is because he’s a rugged player. The 33-year-old is on the smaller side at five-foot-ten but isn’t afraid to go into the corners to battle for the puck.
At times, Biega plays like he’s a six-foot-five defenceman.
He’s an incredible skater who’s able to be effective at both ends of the rink. There are times where you see his offensive side come out, but his abilities stand out while in the defensive zone. At 33-years-old, Biega has been around long enough that he usually does everything right.
There’s not much he does wrong in any game.
Biega brings a ton of leadership into the Leafs’ organization. Many people speak highly about the 33-year-old and how he’s come in and led immediately.
I’m not sure if the Leafs get him into a game, but his leadership qualities go a long way in helping a team have success.
“Alex is a true pro,” Marlies captain, Rich Clune said of Biega on Tuesday. “He’s a captain at this level, and could easily be wearing the ‘C’. Great player, very balancing and calming presence in the room.
“He’s a great guy, great addition to the program, and I anticipate that when he gets his chance with the Leafs, he’ll do a great job for them.”
Uncategorized
Recent articles from Nick Barden