Who should be the number one goalie heading into the playoffs for the Maple Leafs when everyone is healthy? 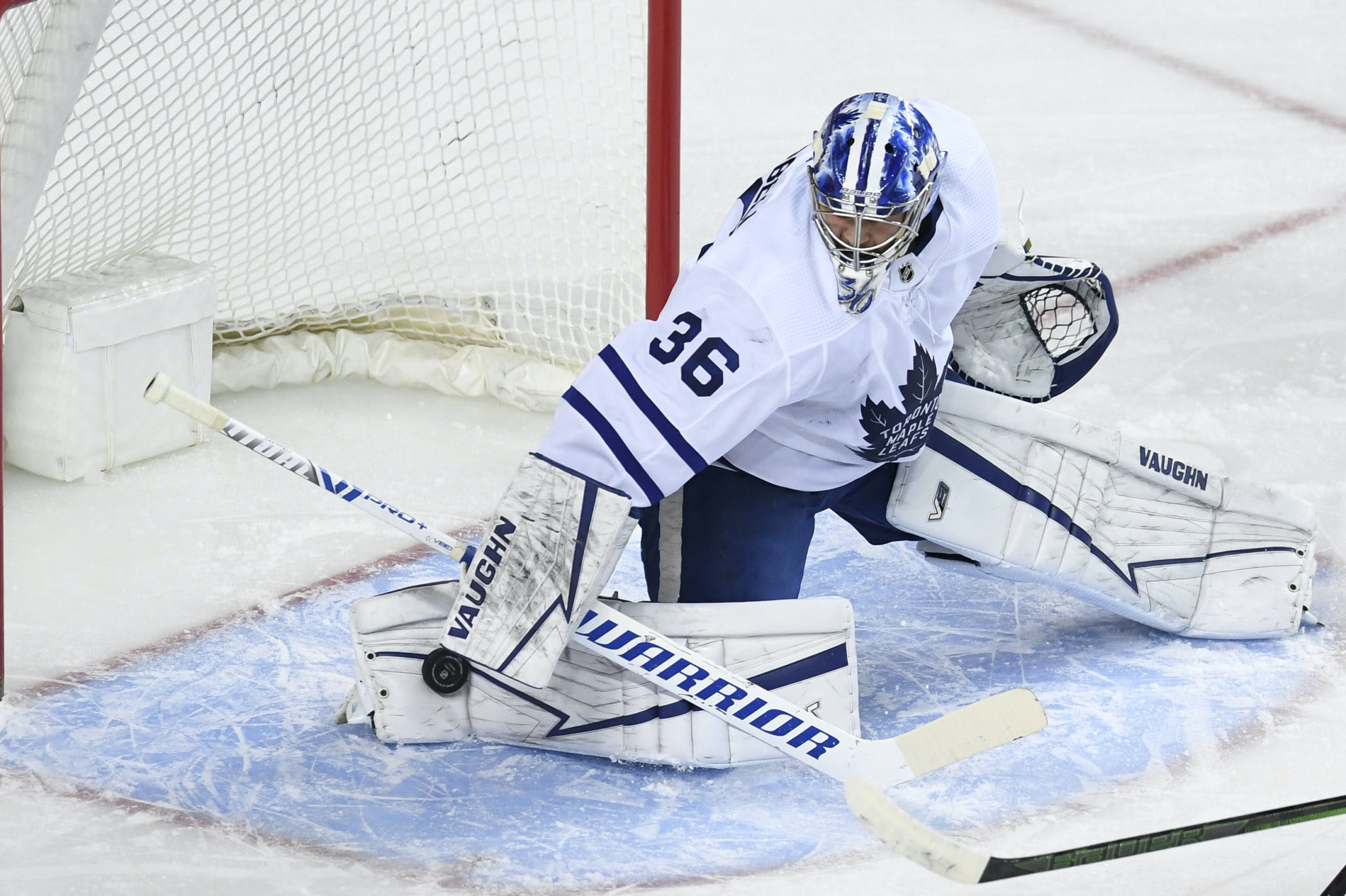 By Joseph Zita
1 year ago
The topic of conversation in Leaf Land has been how inconsistent their goaltending can be at times. Jack Campbell and newly acquired David Rittich weren’t playing at their best level for about almost two weeks and they were a big reason why the Toronto Maple Leafs went on a 0-3-2 stretch after just going on their best stretch of the season, 9-0-1 picking up 19 of the possible 20 points. However, with back-to-back wins over the Winnipeg Jets for Jack Campbell, it looks like he’s put an end to his poor little stretch and is looking like the same goalie that won 11 in a row.
Although goaltending has been up and down at some points this season, I wouldn’t say we should all get too worried about it just yet. Yes, it has been shaky at times this season, but we also have to remember two of the four goalies were playing with nagging injuries that eventually sat them out for some time. And for Frederik Andersen, it’s still holding him out of the lineup.
So on the eve of the trade deadline, the Toronto Maple Leafs went out and made a trade with the Calgary Flames by acquiring some goalie insurance in David Rittich. This move shows us that the Maple Leafs wanted another body in goal that could potentially come in to play some games and help them down the stretch of the season and into the playoffs if needed.
With only eight games left in the regular season, the question that will probably soon loom over Leaf Land is who should be the number one goalie heading into the playoffs for the Maple Leafs? Frederik Andersen when one hundred percent healthy? Jack Campbell? David Rittich? Michael Hutchinson even?

2020-21 stats – 23 GP – 13 W – 8 L – 2 OTL – 2.91 GAA – .897 SV%
It isn’t news to anyone now that Frederik Andersen hasn’t really had the best of seasons this year as he has continued his downward trend as a Maple Leaf, dating back to last season. Don’t get me wrong, Andersen was an amazing goalie through his first three years in Toronto posting three straight seasons with a .917 and a .918 SV% while having three straight 30 win seasons as well.
However, his play has come crashing down and it hasn’t only affected him, but it has affected the team at points too and it has cost Toronto some crucial games. Right now Andersen is recovering from an injury that has sidelined him for quite some time and there really isn’t a set timetable for his return to the team. But what we do know is that he has been skating with the team more often than not compared to a couple of weeks ago and that is a very good sign if you’re a Leafs fan.
For Andersen’s sake, if he’s one hundred percent healthy and has recovered from whatever injury he was dealing with this season while playing better and not posting save percentages below .900 almost every game he plays in, then I can say I would be comfortable with him getting some games down the stretch of the season if they can somehow activate him off the LTIR and even possibly in the playoffs too.
Although if he comes up with poor performances after poor performances yet again, then I think it’s more than okay to give the crease to someone else like Jack Campbell or even David Rittich if he starts stringing together some wins because the biggest thorn that has been in Andersen’s side throughout the whole season has been his play short-handed as he’s been one of the worst goalies in the league on the penalty kill. His play at even-strength on the other hand has been average, nothing out of this world, and nothing to worry about too much either.
Here’s a graph from Evolving-Hockey showing Frederik Andersen’s advanced stats. Blue is good and orange is bad. As you can see his play at even-strength is pretty average, but his play short-handed has been just beyond dreadful and has impacted his numbers a lot in a bad way.

2020-21 stats – 16 GP – 13 W – 2 L – 1 OTL – 2.21 GAA – .922 SV%
Jack Campbell has been a fan favourite in Toronto ever since being acquired by the team back in February of 2020 and has become an even bigger fan favourite this season with his play this year. From being sidelined by injuries multiple times this year to eventually making Toronto Maple Leafs and NHL history with winning 11 straight games to open up a season, Campbell has legitimately made a case to be the number one goalie when Andersen becomes healthy again.
Both Campbell and Andersen have been injured this season and or have been dealing with something while in the lineup at times so it’s kind of hard to try and decide who should be the solidified number one goalie when both guys are fully healthy. However, I just don’t see how you don’t keep riding Campbell right now and potentially into the playoffs while he’s playing this good.
He started the season 11-0-0 and then kind of went on a slump dropping three in a row which resulted in his undefeated record changing to 11-2-1, but then he’s earned back-to-back wins against the Jets and looks like he’s back where he started, playing great hockey in the net.
But the other thing that crosses my mind sometimes is if Andersen comes back sometime this season before the playoffs and all of a sudden turns his season around and is playing like the old Frederik Andersen we know, then we would have a problem on our hands and it’s definitely a good one to have.
If that does happen and I’m saying if, then I think the most reasonable thing to do is split the games between both Andersen and Campbell or simply just ride the hot goalie until he has a poor game. There is absolutely no reason to continue playing Andersen (when he’s healthy) thinking he should be the number one goalie on this team if he isn’t playing as great as Campbell is.

David Rittich – 2020-21 stats – 18 GP – 4 W – 8 L – 2 OTL – 2.98 GAA – .899 SV%
I paired these two goalies together simply because I don’t see any logical reason that they will become the Maple Leafs number one goalie heading into playoffs when all four guys are healthy. However, what I am going to say though is that these guys are more than capable of coming into a game and playing when there are injuries. These two are more than serviceable backup goalies or third-string goalies that can win games at the NHL level, and we’ve seen it happen before.
The tough part about Rittich though is he hasn’t had the best of seasons this year between the Calgary Flames and the Toronto Maple Leafs as his goals-against average is right below 3.00 and his save percentage is below .900. Both those stats don’t jump out to me and say this guy is a legit backup goalie, however, more so a third-string goalie in my opinion by simply looking at his stats this season and even at points of last season too.
Although we have seen David Rittich on top of his game multiple times throughout his career and I am confident he can definitely steal a game or two when it is important, but the only thing that is concerning to me is he really hasn’t done that against a team other than Toronto, (because it seems like he only plays on top of his game against Toronto) since parts of last season and even in the 2018-19 season where he was a monster for the Flames posting a 27-9-5 record in the crease.
Michael Hutchinson – 2020-21 stats – 8 GP – 4 W – 2 L – 1 OTL – 2.42 GAA – .919 SV%
Michael Hutchinson on the other hand, well there’s not too much to say about Hutchinson as I think almost every Leaf fan knows what they’re getting in him whenever he is in the net. But one thing I will say is he has looked pretty solid between the pipes in eight games this season, other than the game against Ottawa where he allowed two soft goals in the first minutes of that game, he has honestly surprised me and I’m sure he has surprised a lot of other people too with how he has played this season.
It was a pretty bumpy road for Hutchinson with the Maple Leafs dating back to the start of last season as he struggled to find his first win of the season and it ultimately came in the eighth game he played that season. He then later finished his season with the Leafs with a record of 4-9-1 before getting traded to the Colorado Avalanche at the trade deadline where he then eventually won two playoff games for them.
It’s great to see Michael Hutchinson bounce back this season with how poor of a season he had last year with Toronto, and having him on this team currently as the fourth-string goalie when everyone is healthy is beyond great to have in my opinion.
Uncategorized
Recent articles from Joseph Zita