Advertisement
Ad
An updated look at the Leafs d-core 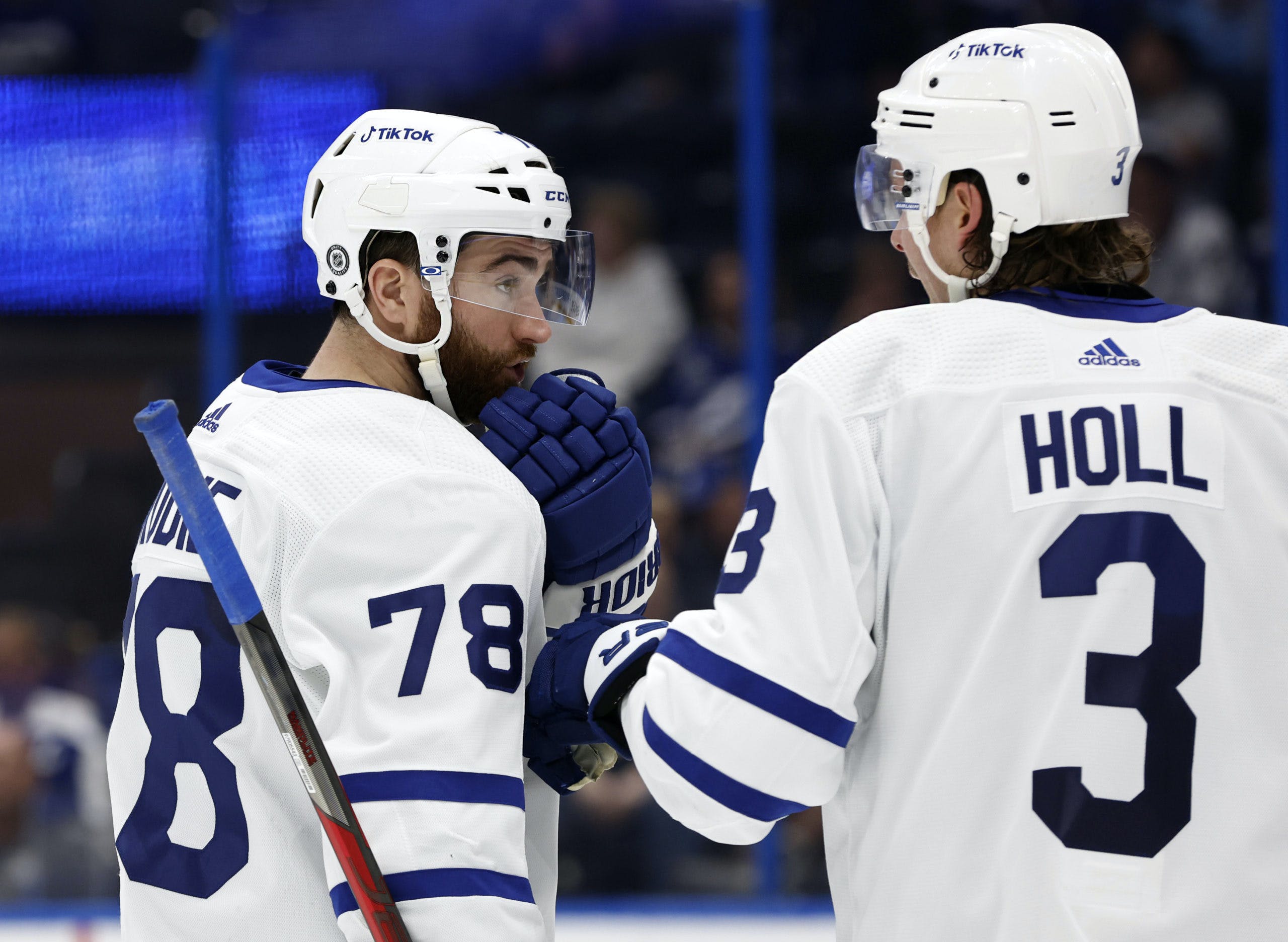 Photo credit: Kim Klement-USA TODAY Sports
By Bennett Jull
1 month ago
Comments
Last night TJ Brodie made his return to the Leafs lineup after missing 12 games. The Buds were already without Jake Muzzin, meaning they were down their top two defensive defencemen. To make matters worse, Morgan Rielly was injured 5 games into that stretch, and the health of both Ilya Samsonov and Matt Murray has been spotty.
Nobody would have blamed the Leafs for dropping points. Instead, they rattled off 12 straight games without a loss in regulation, going 9-0-3. Impressive to say the least. With Brodie returning to the lineup, and others edging closers let’s take a closer look at the Toronto’s blue line.
Pair #1:
Mark Giordano – Justin Holl
These two have been leaned on heavily, and have not disappointed – particularly Giordano. What more can you say about the former Norris trophy winner? The oldest skater in the league has been rock solid. Giordano has provided leadership, grit, and reliability all for the price of $800K. Holl has had an up and down season, but as of late he deserves credit for his play. Everyone’s favourite defenceman to beat up on has been a very steady presence at 5 on 5 and the penalty kill. Of course he still has the occasional gaffe, but when the Leafs have really needed him recently, he has stepped up.
Advertisement
Ad
Advertisement
Ad

Cannot believe we just watched a legendary highlight in real-time Justin Holl is so funny pic.twitter.com/CVfQBUBdie

Pair #2:
Rasmus Sandin – Timothy Liljegren
The super swedes. Both have been challenged to step into larger roles during this stretch, and both have performed admirably. Sandin has well and truly put behind the contract talks he had at the beginning of the season. This is exactly what he wanted – a larger opportunity. Kudos to Kyle Dubas for sticking to his guns, and eventually locking in Sandin at $1.4M for this year and next. Due to Sandin’s stellar play, this is starting to look like a steal. The same can be said for his close friend and partner, as Liljegren has also stepped into a consistent top 4 role seamlessly. He too is locked in at $1.4M next year, meaning Sandin/Liljegren/Giordano’s combined cap hit next year will be $3.6M. Tidy work to say the least.
Advertisement
Ad
Advertisement
Ad
Welcome Back:
TJ Brodie
The Leafs will welcome back Mr. Brodie with open arms. He is the Leafs best defensive defenceman, and quietly goes about his game shutting down the opponents best players on a nightly basis. Last night the Leafs eased him back in, but soon enough he should resume his regular minutes/role. This is a very timely return, as the Leafs lost Victor Mete in Dallas (more on him below).
The 6th Defenceman:
Conor Timmins / Mac Hollowell
Advertisement
Ad
Advertisement
Ad
‘Big Mac’ made his NHL debut during this recent stretch as a result of Muzzin/Brodie/Rielly missing. He stepped in well, and has played a little under 13 minutes per game. At the very least, he has shown he can be a serviceable call up, and didn’t look fully out of place. With a couple more players coming back soon, ‘Cheese’ could be destined for the AHL in a couple weeks. He will be hoping to get into a couple more games, although the emergence of Conor Timmins could get in his way. Timmins has now played the last two games for Toronto. After sorting his skates out early on in Dallas, Timmins has looked very solid. He has shown a solid first pass, and has been good in his own end. Timmins has anchored the 2nd power play unit, and had the primary assist on Engvall’s goal last night. 2 games played, 2 shutouts with Timmins in the lineup.

Victor Mete will "miss some time," per Keefe, but lower-body injury not overly serious. Not expected to play the rest of week.

Jordie Benn has missed the last couple of weeks with an upper body injury. He skated yesterday morning on his own as he continues to work his way back to full health.

Jordie Benn is on the ice with #Leafs conditioning staff this morning. He’s been out since Nov. 23 with an upper-body injury. pic.twitter.com/18q6N1PKYq

It will be interesting to see how much both Benn and Mete factor in once they return. The first 5 defencemen (Holl, Giordano, Sandin, Liljegren, Brodie) are locks to play every game as long as they remain healthy. Timmins has looked the part so far, although one injury could see either Benn or Mete thrust right back into regular minutes.
Not Yet:
Morgan Rielly / Jake Muzzin
There are doubts as to whether we shall see Jake Muzzin in a Leafs uniform again, let alone this season. I wish Jake the very best, and hope he does what’s right for himself and his family – whatever that may be. Rielly is still weeks away, he has not started skating yet.
Advertisement
Ad
Advertisement
Ad
Going Forward:
Giordano – Holl
Sandin – Liljegren
Brodie – Timmins
Hollowell
*Mete/Benn at least a week away
It will be fascinating to see how Sheldon Keefe deploys Brodie. Does he break up the pairings that have been working together so well? Is Conor Timmins in line for more minutes with Brodie by his side? As long as the Leafs keep collecting points, I don’t see this lineup changing too much. My personal hope is that Timmins seriously elevates his play, and starts to find more of his ceiling. He is capable, and hopefully he can find the consistent health that has eluded him thus far in his career. Hopefully all the Leafs, particularly the blue line, can find better health as we approach Christmas.