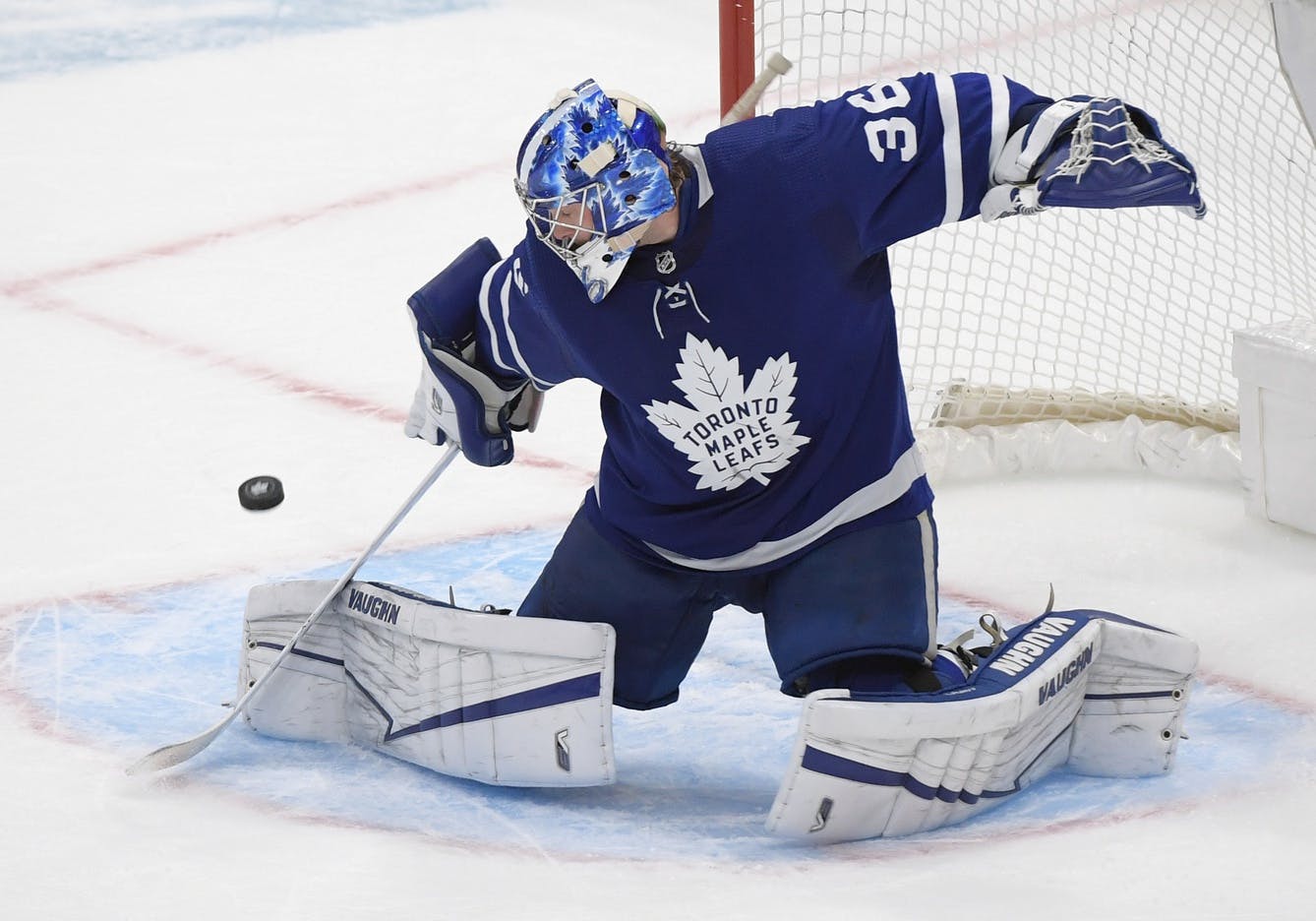 Photo credit: © Dan Hamilton-USA TODAY Sports
By Mer
1 year ago
Comments
It wasn’t quite the resounding win of Saturday, but the Toronto Maple Leafs did win (in regulation) game 3 of the series against the Habs, pulling ahead to a 2-1 series lead. And, as my title suggests, they very much have @Jack Campbell to thank for it.
Last night’s game was quite the rollercoaster ride, almost literally. It started off flat and kind of boring, with not much at all happening in the first period (other than that @Carey Price save we’ll get to in a bit), and then a TON of high octane action in the second, leading into a bit of a skid to stop in the third. Nevertheless, with equal SOG, the Leafs managed to score 2 goals to the Canadiens’ 1, which according to my math means they won the game – and that’s what matters.
Let’s take a look at each period a bit more in depth, shall we?
First period
As mentioned, not much happened in the first. In fact, many fans were surprised and a bit disappointed at such low-energy hockey from these two teams in a tied series. The Leafs did kill off a four-minute penalty to start the game, but other than that the only notable thing that went down in the first period was a highlight-reel save by Carey Price on @Jason Spezza.
Advertisement
Ad
Advertisement
Ad

What’s with veteran goalies and making absolutely bonkers saves against the Leafs? This is a tradition I could do without.
Second period
The second period is where all the action happened. Literally, all the goals scored in the entire game happened in the second period.
@William Nylander opened the scoring for the game:

And then @Nick Suzuki tied it:

But THEN….none other than @Morgan Rielly gets it back:

MO GETS IT BACK! pic.twitter.com/Qy5qioWHTp

All in the second period. And the period ended with the Leafs at a 76% chance to win the game – which they did.

The Leafs have definitely become a bit of a “second period team”, which is fine and all, but when you’re only up by 1 goal, some offensive pressure in the third would be helpful. That is not what happened last night.
Advertisement
Ad
Advertisement
Ad
Third period
The third period ended up being a clench and watch the clock period, as the Leafs let their foot off the gas in a major way. They started the period with almost double the Habs’ SOG, and ended it evened up. Jack Campbell had to work to keep the lead, and boy did he ever.

His name is Jack Campbell pic.twitter.com/rTh1LOH1nI

Jack Campbell is dialled in pic.twitter.com/0YRR8wuoLd

He did get some help, occasionally:

What a block by Justin Holl pic.twitter.com/QZOuppMBQ0

But he did the bulk of the work to secure the win in the 3rd. It’s not necessarily bad that the Leafs are focusing on buckling down and defending a lead, but their primary talent is in offense. When it’s a 1-goal game, you’d really like to see them try to pad that lead a bit before they buckle down into defensive mode.
Thoughts and stuff
Advertisement
Ad
Advertisement
Ad
The Leafs won. And that is good. There is a lot to be impressed by and to feel optimistic about. But it was not the resounding 5-1 defeat from Saturday. Granted, @Nick Foligno sat the game out, and we’ll find out later today if that was isolated to one game or not. And, there’s always the chance Keefe sits Jack on the second half of the back to back. Additionally, it’s not fantastic for the Leafs that Carey Price is looking more like VIP Price than the Price of the last couple seasons. Beating him over and over won’t be an easy task.
However, here’s the really good news:

I’m personally of the opinion that scoring more goals and taking a multi-goal lead is less stressful and therefore more fun, but in the playoffs it’s definitely rarer to see those high scoring games. If the Leafs can successfully and consistently win games by 1 goal, that actually probably bodes well for them.
Advertisement
Ad
Advertisement
Ad
Finally, this Leafs team sure is fun to watch in the playoffs. It’s exciting watching some of the newer players showcase why they were brought in – like @Wayne Simmonds:

But mostly, it’s fun watching this team have fun:

Last thought from me on the game last night: Graham Skilliter? Should not be allowed to officiate Leafs games.