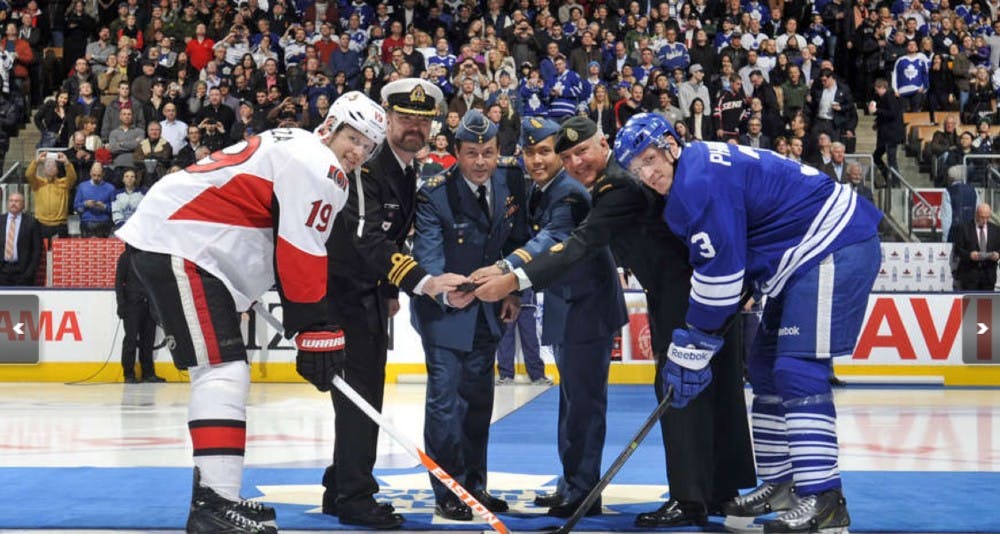 By Mark Norman
1 year ago
Comments
January 31, 2010, was one of the most exciting moments of the early 2010s for Maple Leafs fans. On the heels of a six-game losing streak and with the 29th-place Leafs in jeopardy of relinquishing a lottery pick to Boston from the Phil Kessel trade, Brian Burke pulled off two blockbuster moves in a single day that generated a lot of hope in Leafs Nation.
The Leafs, who were last place in goals-against-per-game at the time of the trade, needed defence and goaltending, badly. Burke first acquired the goaltender who delivered him a Stanley Cup in Anaheim three seasons prior, Jean-Sebastien Giguere, in exchange for two John Ferguson Jr. oopsies: Jason Blake and Vesa Toskala.
Burke then followed it up with an even bigger deal. Darren Dreger with the call:

phaneuf to the Leafs

Advertisement
Ad
Advertisement
Ad
The Internet was set afire with gossip about who could be going back the other way. Kessel and a first? Kaberle and Kadri? Getzlaf in a three-way deal? I truly encourage you to read through at least the first 15 pages of this Calgary Flames message boards thread, which catalogues the initial moments of panic in the aftermath of Dreger’s tweet, the (horribly wrong) prognostications of what the return would be from the Leafs, and the unbridled anger when the actual return was announced.
Twenty minutes later Dreger had an update:

when asked if Stajan and Hagman are main pieces in Phaneuf trade, source says "its bigger than that."

This super-juiced the conversation. Among the things going through the minds of Leafs fans:
Advertisement
Ad
Advertisement
Ad
“It’s bigger than that?!”
“Bigger than Phaneuf?!”
“Is Kadri safe?”
“What else could be coming back from Calgary?”
“What the hell is Burke up to?”
Finally, Bob McKenzie provided clarity ten minutes later:

Phaneuf, Sjostrom and Aulie to Toronto for Hagman, Stajan, Mayers and white.

Leafs and Flames fans were floored, for very different reasons. On the surface, this was an absolute heist by Burke, who somehow managed to acquire a hard-hitting, heavy-shooting defenceman just two seasons removed from a Norris trophy nomination for what amounted to three players whose point totals were juiced by the “Someone Has To Score” rule and Jamal Mayers. To have also received professional Ent impersonator Keith Aulie in the deal was the cherry on top. The Leafs now had an elite winger (Kessel), an elite defenceman (Phaneuf), and a goaltender with Stanley Cup pedigree (Giguere). Things were looking up.
Advertisement
Ad
Advertisement
Ad
Of course, we all know how that panned out. Kessel did what was asked of him during his tenure in Toronto, which was to score goals and lots of them. Phaneuf was immediately handed some of the toughest minutes in the NHL with uneven results. Giguere started hot with back-to-back shutouts in his first two games as a Leaf but played just 48 games for the team while posting a 0.906 save percentage.
Phaneuf was named captain during the 2010 offseason, ahead of his first full season as a Leaf. The boos began in November 2010.
The thing is, though, Dion Phaneuf ruled. The man was one of the last remaining open-ice hitters in the game, and every opposing forward knew he was capable of destruction. To add to this, Phaneuf had a booming slapshot from the point that, when it wasn’t hitting his own players, struck fear into the hearts of defending skaters. We all know about “power forwards” but Dion was truly a “power defenceman”, one of the last of a dying breed. The Leafs have not had anyone with his package of skill and power since he was traded to Ottawa in February 2016. I honestly cannot remember one bone-crushing hit levied by the Leafs since his departure that rivalled his hits on Stephane da Costa or Michael Sauer or Tuomo Ruutu.
Advertisement
Ad
Advertisement
Ad
Sure, Dion had his warts. Phaneuf was immediately thrust into a shut-down pairing role and played against some of the toughest competition in the NHL. It was a role he was ill-equipped to handle without a stalwart defensive partner (no offence, Carl Gunnarsson). His mobility was exposed by the league’s elite forwards and he often looked a half-second behind the play as a result of playing against players who were a half-second ahead.
The thing is, Phaneuf was put in the unenviable position as Captain of a Toyota Corolla with Tesla stickers on it. The Brian Burke Leafs were poorly conceived and constructed, built using an outdated view of how to win in the NHL. The stoic and serious Phaneuf, who carefully chose his words in post-game interviews, became a lightning rod for criticism from a Leafs fan base that had been promised glory but had been served nothing but disappointment. He was the man behind the wheel of the 18-wheeler. Even his choice of hat for post-game interviews became a topic of heated discussion.
Advertisement
Ad
Advertisement
Ad
The target of rumours about locker room issues in Calgary, Phaneuf could not have been painted in a more different light by many of his Leafs teammates. By all accounts, Phaneuf was an excellent teammate who took his role as team Captain seriously, often going above and beyond to make new teammates feel welcomed and existing teammates feel included. He took young players under his wing, often inviting them to his home in Prince Edward Island during the offseason or giving them a place to stay during the season.
Phaneuf was also lauded for his charitable work while in Toronto. He spent hundreds of thousands of dollars hosting kids and family members from Toronto’s Hospital for Sick Children (also known as SickKids) in a private luxury box for Leafs games. At the end of games, win or lose, he would graciously give them one-on-one time well into the night. Phaneuf, who also is a huge supporter of Special Olympics events, was always front-and-centre at Leafs charity events, setting an example for his teammates and being a great ambassador for the team.
Advertisement
Ad
Advertisement
Ad
Some fans will point to “Salute-Gate” in November 2014 as a failure of his leadership, when the team, who had been besieged by booing and jersey tosses in recent games, did not salute their fans after a victory against the Rangers. The choice was, to put it lightly, not received well. While Phaneuf explained this as simply a change in routine, to many it felt like the players were returning the middle finger to their fans, as if to demonstrate they were upset with the vitriol that had been levied their way for weeks. To his credit, Phaneuf took responsibility for the incident in today’s press conference and said he wished that had been handled differently.
While team success did not come while Phaneuf was captain here, he performed his duties with class and dignity while being one hell of an entertaining player to watch. He loved being a Toronto Maple Leaf despite all the craziness involved with this market, and I hope people remember that when he is honoured for his retirement before tonight’s game vs. the Predators.
Advertisement
Ad
Advertisement
Ad