Advertisement
Ad
Game #5 Recap: Maple Leafs are one win away from closing out series against Lightning 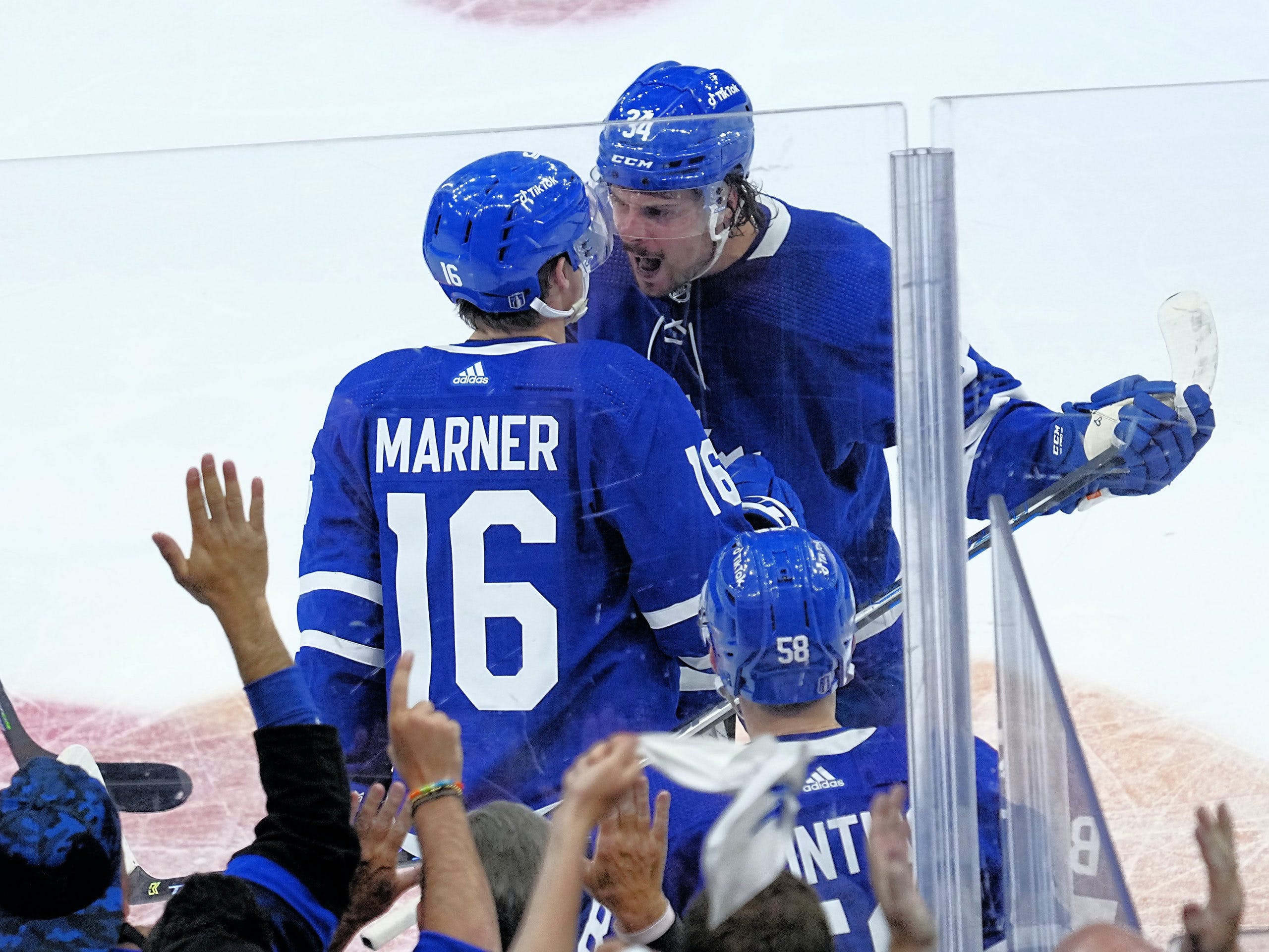 Photo credit: John E. Sokolowski-USA TODAY Sports
By Nick Barden
8 months ago
Comments
In all honesty, I didn’t think I’d be sitting here discussing a Maple Leafs 4-3 win over the Lightning, but here I am.
For the first time in this series there has finally been a lead change during a game and for Toronto fans, it luckily came at the right moment. And now, they’re one win away from moving onto the second round.
It felt different walking around downtown Toronto on Tuesday night. The Maple Leafs have a chance to close out the series against the back-to-back Stanley Cup Champions on Thursday night.
As fans exited Scotiabank Arena and Maple Leaf Square, they were chanting “Leafs in Six!” The excitement around the city hasn’t been felt since before the pandemic and it honestly feels like the city is coming back to life.
Fans hugging and high-fiving each other, groups of people hugging and dancing in Maple Leaf Square — it feels normal — with a hint of excitement.
Advertisement
Ad
Advertisement
Ad

Let’s remember how we got here.
The game began with two unfortunate bounces going the Lightning’s way. The first came on a shot from Steven Stamkos which beat Jack Campbell over the blocker.

The puck bounces over a number of sticks before falling to Stamkos for his second goal of this series.
Under a minute later, Victor Hedman’s point shot somehow finds its way through all of the traffic in front of the net and past Campbell.

Maple Leafs head coach Sheldon Keefe would try and calm the Maple Leafs during the first commercial timeout of the game. And it seemed to help, a lot.
After the TV timeout, Jason Spezza threw this massive hit on Pierre-Édouard Bellemare.

Jason Spezza doesn't care who you are

William Nylander even got a massive chance after coming out of the box from a penalty he was assessed a few minutes earlier. He couldn’t beat Andrei Vasilevskiy on the backhand.

Toronto had two power plays to capitalize on in the first period, but couldn’t do so, in-part from Tampa’s strong penalty killing.
During the second period, Maple Leafs captain John Tavares finally got on the board with his first goal of the series as Nylander’s shot goes off his leg and in.

THE LEAFS ARE ON THE BOARD pic.twitter.com/RPs8pJp4Sd

Although it’s only been four games, it has felt like a light-year since Tavares put the puck into the back of the net. It was great for the team to see him get his first of the playoffs.
Later in the second period, Nick Paul got sent all alone on a break away, but Campbell was there to make the massive stop.
Advertisement
Ad
Advertisement
Ad

Massive save from Jack Campbell pic.twitter.com/24gEfvBGDz

There was also this massive hit from Auston Matthews on Mikhail Sergachev that sent him wondering where he was.

So, after two periods of play, the Maple Leafs were down 2-1 to the Lightning. They needed two goals to win the game, but instead, they got three.
Tavares got the period started, making a nice play to get around Erik Cernak and put the puck in front to Morgan Rielly for his second goal of the series. The game is now tied up at two.

And shortly after Rielly’s goal which tied the game at two, William Nylander had a shot that sent all of the uncle’s deeper into their seats.

That was, until four minutes later, when Ryan McDonagh blasted an incredible shot past Campbell to tie the game at three. And for many, this game was destined for overtime.
Advertisement
Ad
Advertisement
Ad
But, Auston Matthews, Mitch Marner, and Michael Bunting had something else to say.

Bunting made an incredible play too get the puck off the boards to Marner, to which then he made a nice play with a shot-pass that went off Andrei Vasilevskiy’s pad and right onto Matthews’ stick. And that goal sealed the deal.
The Toronto Maple Leafs win Game 5 and need one more win to close out their series against the Tampa Bay Lightning.

Like I’ve highlighted in past recaps, Campbell’s save percentage is what I’d like to highlight first. The first two goals weren’t the best to let in, but his game after that was stellar. He made some incredible saves and came out of the game with a .914 save percentage.
The Maple Leafs seemed to dominate at five-on-five in CF, finishing the game with a 57.69 CF%. It also wasn’t even close in xGF after the first period (which Tampa dominated). The Maple Leafs finished with a 60.24 xGF% at five-on-five.
Advertisement
Ad
Advertisement
Ad
Prior to the game, for some reason, there was a lot of discussion about Justin Holl being the worst defenceman in the lineup. But, after watching that game and seeing the numbers, it’s time to put some respect on his name.
The 30-year-old finished with the fourth-highest CF at five-on-five at 59.09%. Even his xGF% was exceptional and he sat behind only Mark Giordano for the best xGF% on the team. Holl’s xGF% was 72.89.
When looking at everything, the biggest number is the score line. When it mattered most for the Maple Leafs to show up, they did, and they did it better than ever. The doubt that fans had while it was 2-0 is no more and each person who cheers on the Maple Leafs thinks they can close out the series in Tampa on Thursday night.
Advertisement
Ad
Advertisement
Ad
Heading into Florida on Thursday, the most important thing for Toronto is staying in the moment. The Maple Leafs can’t let their demons (as Paul MacLean called them in the All or Nothing series) get to them. Focus on the task at hand, which is winning that game, and the rest should come.
Tuesday night’s game was the most important of the year, but now the most crucial match comes on Thursday, when the Maple Leafs have a chance to close out the series vs. the back-to-back Stanley Cup Champions.
(Statistics via NaturalStatTrick.com)
More from TheLeafsNation.com
POINTSBET IS LIVE IN ONTARIO