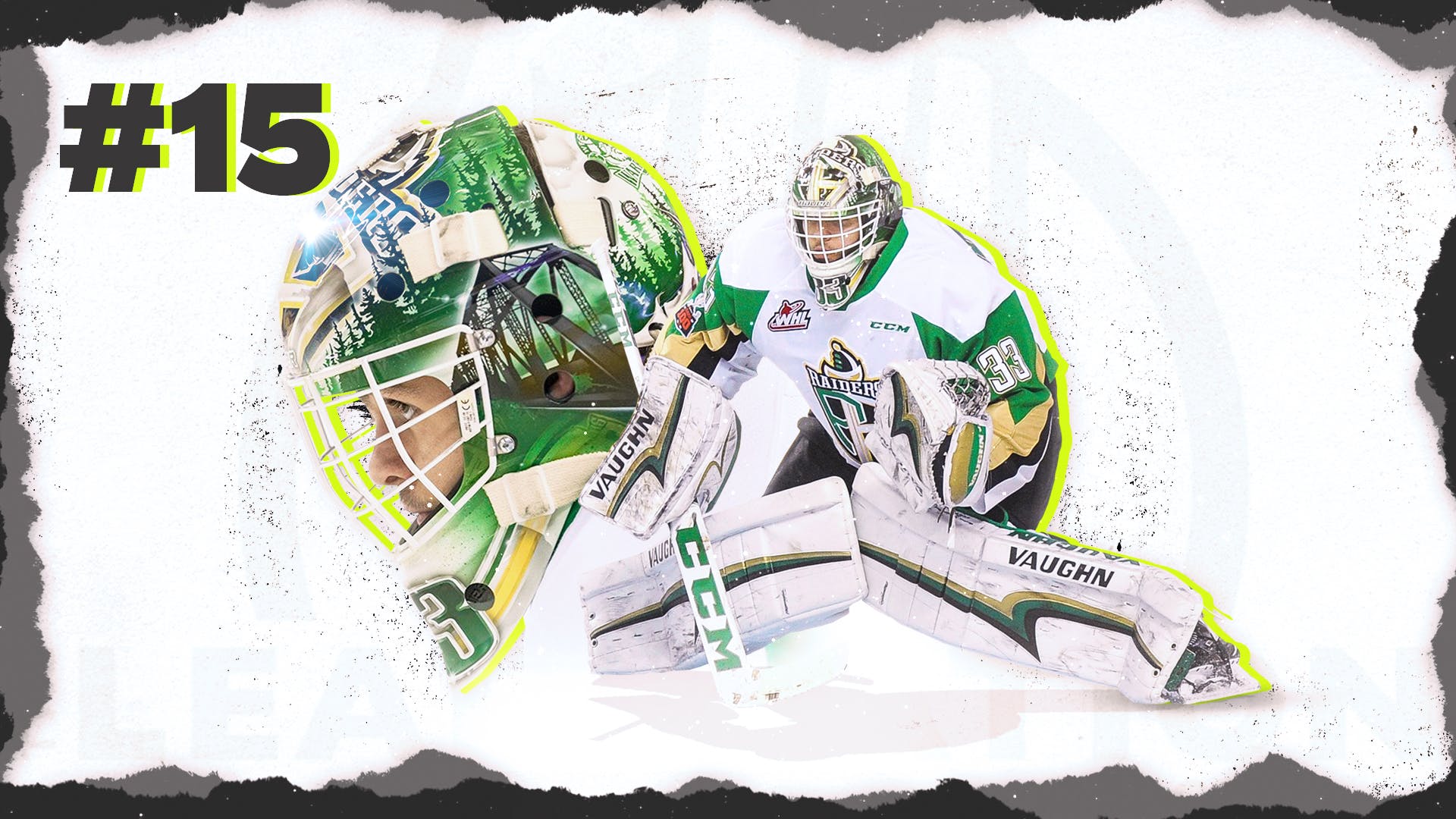 By Brian Reid
2 years ago
Comments
Ian Scott was selected by the Toronto Maple Leafs in the fourth round of the 2017 NHL Entry Draft, the last draft with Scouting Guru (citation needed) Mark Hunter at the helm. Scott spent his entire WHL career with the Prince Albert Raiders, who selected him ninth overall in the 2014 WHL Bantam Draft, making him the highest goalie selected since the Tri-City Americans took Carey Price seventh in 2002.
At the time he was selected, Scott was coming off his first season as a WHL starting goaltender. In 50 games behind a hapless Raiders team, Scott went 12-31-3 with an .895 save percentage and two shutouts. Nothing eye-popping, but solid enough numbers for a goaltender shouldering a starter’s workload for the first time behind a bottom-three team. His stats coupled with his physical attributes and raw potential saw Scott named the third ranked North American goaltender by NHL Central Scouting entering the 2017 draft, where the Leafs made him the 11th goaltender selected at 110th overall. He signed his entry-level contract on December 14th, 2018.
Rank – Grade – NHL Readiness
15th — C — two-four yrs
Position: Goaltender
Age: 21
Height: 6’4”
Weight: 181 lbs
Drafted: 2017, Fourth round, 110th overall
Advertisement
Ad
Advertisement
Ad
What Kind of Player Is He?
So far in his career, Scott has shown to have the main baseline strengths you’d like to see in a goaltender. His biggest strengths are his quick lateral movement and puck tracking abilities, oftentimes leading to him being in the right position for an easy glove or chest save, without allowing a follow up chance to the opposition thanks to his solid rebound control. While he does not need to rely on his athleticism like a lot of young goalies, Scott has shown he is more than capable of getting across to make a sprawling glove save or dramatic pad stop when necessary.
Scott is also a fairly confident puck handler, and doesn’t shy away from playing the puck when needed. The pinnacle of this was a little over two years ago when on November 16th 2018, he scored an empty net goal against the Tri-City Americans.
Advertisement
Ad
Advertisement
Ad

We could watch this every day, but…

On this day two years ago, Ian Scott scored a goal against the Tri-City Americans!#GoRaidersGo pic.twitter.com/bBzWEGbX9F

Scott spent four years in Prince Albert, mostly playing on subpar teams. His best season came in 2018-19, when Scott went 38-8-3 for the Raiders with a .932 save percentage and eight shutouts. The Raiders would go on to win the WHL Championship, with Scott starting all 23 games, posting a .925 save percentage with five shutouts. Scott would end the year by being named WHL Playoff MVP, WHL Top Goaltender, and CHL Goaltender of the Year.
What’s Next for Scott?
Advertisement
Ad
Advertisement
Ad
Unfortunately, this is where things would turn poorly for Ian Scott. Coming off of his incredible final season in the WHL, Scott was poised to compete with Joseph Woll for a job with either the Toronto Marlies or Newfoundland Growlers (where he would have more than likely been in the mix for the starter’s job) for the 2019-2020 season. Unfortunately, a nagging hip issue led to the 20-year-old having surgery on December 19th, 2019 (one year and a day after signing his ELC) having not appeared in a single game for either club. The Leafs announced that Scott had been shut down for the season, and was expected to be ready for the traditional summer training camp in 2020. Of course, due to the ongoing pandemic, said training camp never occurred. Furthermore, due to the status of the AHL being up in the air and the Newfoundland Growlers announcing that they, along with the rest of the ECHL’s North Division, have opted out of competition for the 2020-2021 season, both of Scott’s most likely destinations from a year ago seem out of the question.

BREAKING: The Newfoundland Growlers, along with the remaining teams in the North Division, have opted out of competition for the 2020-21 ECHL season under the ECHL’s COVID-19 Voluntary Suspension Policy.

At just 21-years-old, these setbacks do not necessarily mean that Scott has completely derailed on his path to the NHL. Even with the injury, Scott still has a strong fundamental base and access to a top notch team of physicians and trainers to help him regain any steps he may have lost over the last year. However with new competition in the form of Artur Akhtyamov and the aforementioned Joseph Woll widening whatever gap may have separated the two before this season, Scott may need to have a stronger return to play than once anticipated if he plans to cement himself as Toronto’s goaltender of the future.
Advertisement
Ad
Advertisement
Ad