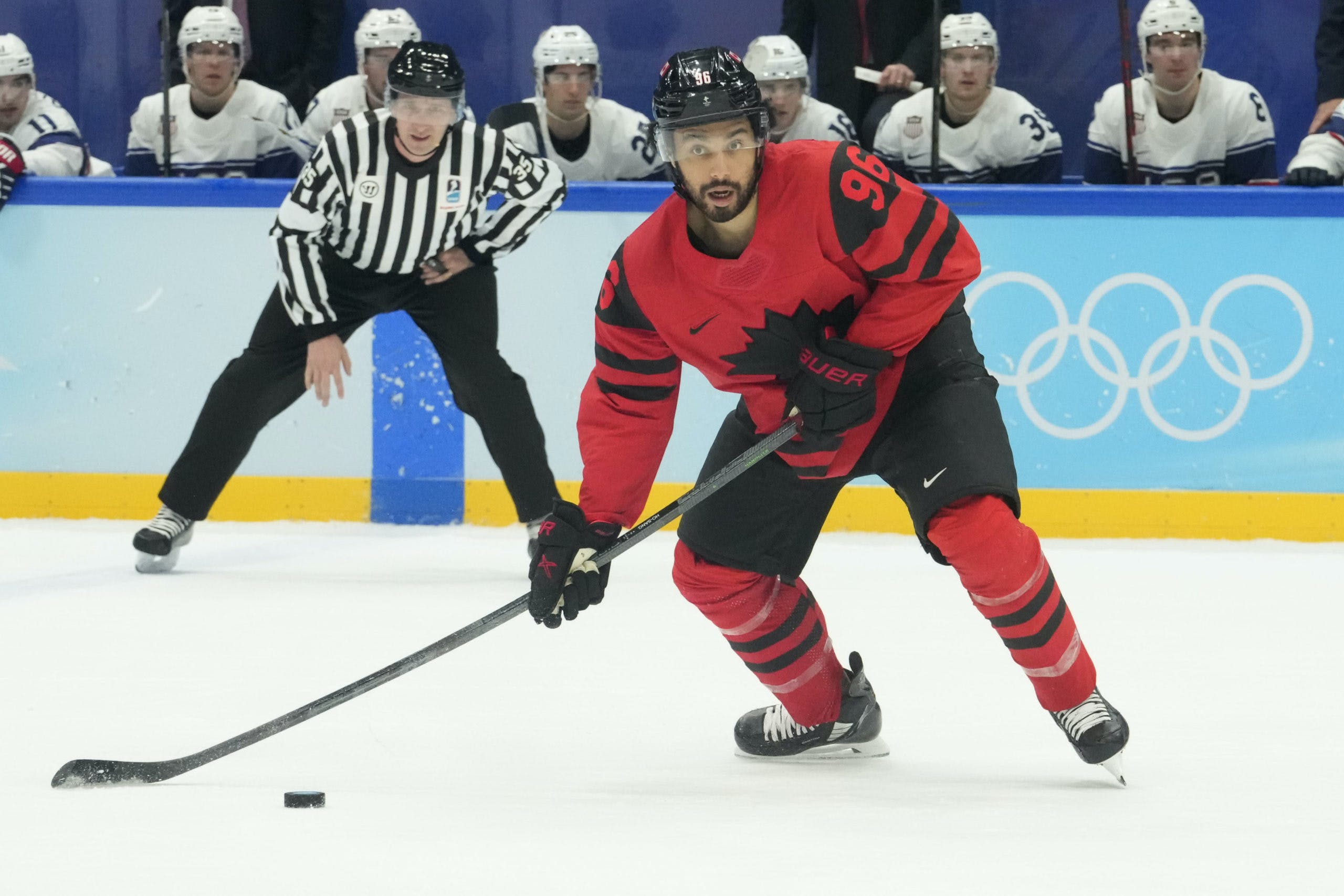 Photo credit: Rob Schumacher-USA TODAY Sports
By Nick Barden
11 months ago
Comments
Wow. Day four of Men’s Hockey at the 2022 Olympics didn’t disappoint.
The preliminary round is two-thirds of the way finished and today’s matchups were Canada vs. United States, Germany against China, the ROC taking on Czechia, and Switzerland facing Denmark.
A lot of hype was around the Canada-USA game due to the exciting players on both sides. On Canada, you have Josh Ho-Sang, Mason McTavish, Owen Power, and Kent Johnson. For the United States, there was Matthew Knies, Nick Abruzzese, Matty Beniers, and Jake Sanderson.
The other games, though, didn’t disappoint either.

We have to start with the first game on the schedule, which happens to be Canada vs. USA.
Like I said, there was a lot of hype around this game. Both countries are the dominant teams in the tournament so far, but it’s always nice to get a taste of similar competition. And the fact that some players on Canada and the US play with each other in College or in Europe is pretty cool too.
Advertisement
Ad
Advertisement
Ad
It was a great start for Canada, who opened the scoring just 1:24 into the game. A shot by Mat Robinson had eyes and found the back of the net.

Canada takes an early 1-0 lead over the U.S. on a goal from Mat Robinson with a little help from Josh Ho-Sang and Eric Staal 🏒 pic.twitter.com/BigSViY7nQ

Josh Ho-Sang’s gets his first-ever point at the Olympic games, with Eric Staal tallying his second point of the tournament.
Not even a minute later, though, United States scores as Andy Miele beats Eddie Pasquale.

Andy Miele ties it up for team USA, beating a sliding Pasquale top-shelf on the odd-man rush! What a response!#USAvCAN #BEIJING2022 pic.twitter.com/AEdKxYXCPP

United States would score two more goals — one in the first and another in the second — before Canada found the back of the net again.
The US loses the puck while on the power play, Canada comes the other way, and Corban Knight finishes it off to make it a one-goal game.

Corban Knight with a BEAUTY for Canada to make it 🇺🇸 3-2 🇨🇦 pic.twitter.com/lbB8pnzrqu

However, the third period wouldn’t get any easier for Team Canada. If I had to be honest, this wasn’t Pasquale’s best game.
Advertisement
Ad
Advertisement
Ad
When you look at Miele’s goal in the first period, Pasquale is seen committing too much to the right, which is why Miele is able to put it in.
Then, on the USA’s fourth goal, former Maple Leaf (and Marlie) Kenny Agostino finds a way to squeeze it through Canada’s goaltender.

The final score would finish as 4-2, with the United States taking another three points, which puts them atop of Group A. Canada sits second with three points.

While you were asleep, Germany and China played an exciting game.
It seemed like the game was over right before the second period ended, as Germany had a commanding 2-0 lead.
But with 46 seconds left in the period, Parker Foo etched his name into the history books as he scores China’s first goal in Men’s Olympic Hockey.
Advertisement
Ad
Advertisement
Ad

Halfway through the third period, and this time it’s Taile Wang who scores for China. This made the game interesting, but the host-nation couldn’t find a way to upset Germany and lose 3-2.
That moves Germany into a tie with Canada for points, but the Canadians have the edge in Goal Differential.

On Saturday morning, we had the privilege of seeing the ROC take on Czechia, and what a game that was.
It was 3-2 Czechia after two periods, but the ROC wasn’t going to go away that easy. They scored three goals in the period, one of which was by Kirill Semyonov, who spent a little bit of time in the Maple Leafs organization this season. (Nikita Gusev, who also spent training camp with the Maple Leafs had three assists in this game.)
Advertisement
Ad
Advertisement
Ad
Czechia, though, was able to add two goals of their own in the period and force that game to overtime.
The ROC would get a penalty two minutes in and Libor Šulák ends the game with Czechia’s fourth power play goal of the game.

Although they lost, the ROC gets two points and leads Group B after the preliminary round. Czechia sits in third place in Group B with four points.

The final game of the day was between Switzerland and Denmark — another high-scoring game.
After the first period, it was 1-0 Switzerland. In the second, Denmark was able to claw their way back scoring three goals in the period, making it 3-1. Another early goal in the third period put Denmark up 4-1.
Then, Switzerland wanted to make it interesting, as they scored two unanswered goals. One was scored by Fabrice Herzog, who was drafted by the Maple Leafs in 2013.
Advertisement
Ad
Advertisement
Ad
Unfortunately, though, Frederik Storm was able to score on the empty net and give Denmark the 5-3 win.
Denmark now sits in second place in Group B with six points (two wins and one loss) and Switzerland sits in last with only one point.