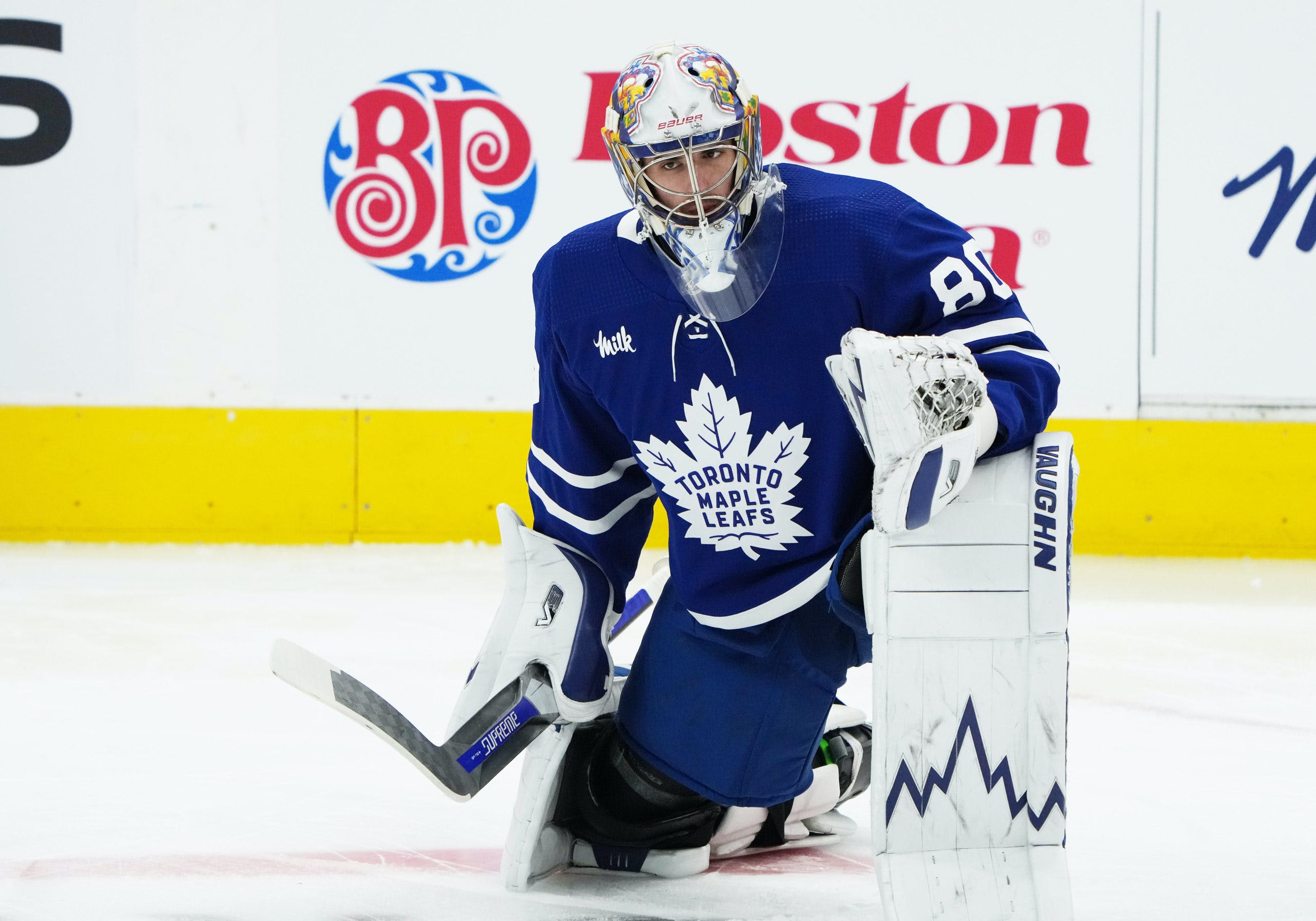 Photo credit: Nick Turchiaro-USA TODAY Sports
By Colin Hunter
22 days ago
Comments
Another year of Maple Leafs hockey, another year of the injury bug causing goaltending issues.
With all of Ilya Samsonov, Matt Murray, and Joseph Woll at various phases of recovering from injury, the Leafs have been forced to lean on their depth. Erik Källgren, who saw some time with the Leafs last season, has filled in as starter, with mixed results.
The goaltender that intrigues me, however, is the acting backup Keith Petruzzelli. I wrote in my goaltending primer earlier this year that Petruzzelli would “have to have some degree of AHL success this season” in order to continue being considered an NHL prospect. And a degree of success he has had. Through six games with the Marlies so far, Petruzzelli is 6-0-0 with a .922 save percentage. This strong play, coupled with the Leafs’ injury issues, resulted in him signing his first NHL contract on November 6th.
Advertisement
Ad
Advertisement
Ad

Some Keith Petruzzelli highlights from this season. The 6-foot-6 netminder is 6-0-0 and has a .922 SV% with the Marlies. Coming off of a strong first professional season with the @NLGrowlers pic.twitter.com/09g3cj1WzB

To go from starting in the ECHL to earning an NHL contract within a year, injuries or not, is very significant. I spoke with TLN’s Dylan Murphy (@dylanmurphy329 on Twitter) who covers the Growlers for the site about him, and he praised Petruzzelli’s work ethic and positive attitude. Further, Dylan spoke with Growlers head coach Kyle Wellwood, who echoed that sentiment, saying that “[the organization] always said he was a gamer, he just had to learn to be a pro off the ice- and by that I mean, taking care of his body, workouts, nutrition, so on, and that is one area he did improve on”.
Advertisement
Ad
Advertisement
Ad
Listed at 6’6 and only 180 pounds, it’s easy to see why the off-ice aspect of his game may have been a concern. In fact, his measurements make him the tallest and the lightest player currently on the Leafs’ roster. But we’ve seen year after year that a player is more than just the numbers that surround them.
Height, weight, and save percentage are all great, but what do the Leafs really have here with Petruzzelli? I analyzed a number of his games with the Marlies this year to find out:
It’s a stereotype that the most important thing to evaluators is a goaltender’s size. However, when watching Petruzzelli play, it’s hard not to notice his frame. He is exceptionally tall, with the crossbar hitting roughly his lower back when stood up straight. He varies his stance effectively, switching between a narrower, upright stance, and a wider, crouched stance when necessary. He does, however, crouch much more than I had expected, sacrificing a bit of his height for a more compact stance.
Advertisement
Ad
Advertisement
Ad
Petruzzelli does a number of things very well at the AHL level. He moves well through the center of the crease, maintaining strong angles. This, in combination with effective body/glove positioning and quiet (set) feet make him very hard to beat on a clean shot. Further, his frame and compete level allow him to make some impressive saves on challenging shots and opportunities where he may be out of position. He tracks relatively well, maintaining strong sight lines with the puck, and battling through traffic using his size advantage.
I do, however, have a number of concerns with his game if he were to play at the NHL level. While the paths he takes to move are typically efficient, he is not an overly quick goaltender. He also tends to play a bit deeper in his net than typical, likely a strategic choice due to his size and relatively limited movement. His lateral reads and movement speed, to my eye, are not quite up to the standard of an NHL goalie, and his transitions between movements can be sloppy, costing him an extra second in movement or resulting in a poor rebound on occasion.
Advertisement
Ad
Advertisement
Ad
Petruzzelli strikes me as a goalie who is playing well in the AHL, but isn’t yet ready to graduate from the league. There’s nothing wrong with that, particularly for a 23-year-old goaltender in his second professional season. Like any goalie, it’s possible that he could provide the Leafs with a couple decent games if things fall right, but I would not be counting on it, and it appears that management agrees.

Keith Petruzzelli, the current back-up goalie, has never played in the NHL @TSN_Edge

I hope that I don’t come across as ripping on Petruzzelli, because I do think that he is a legitimate NHL prospect at this point. There is plenty to like about his game, and I expect him to continue to play well in the AHL once the Leafs’ injury issues die down. He has certainly earned his contract and an opportunity to continue proving himself.
Advertisement
Ad
Advertisement
Ad
His time may not be now, but given a chance to get stronger and develop his game in the AHL for a while, I like his chances.