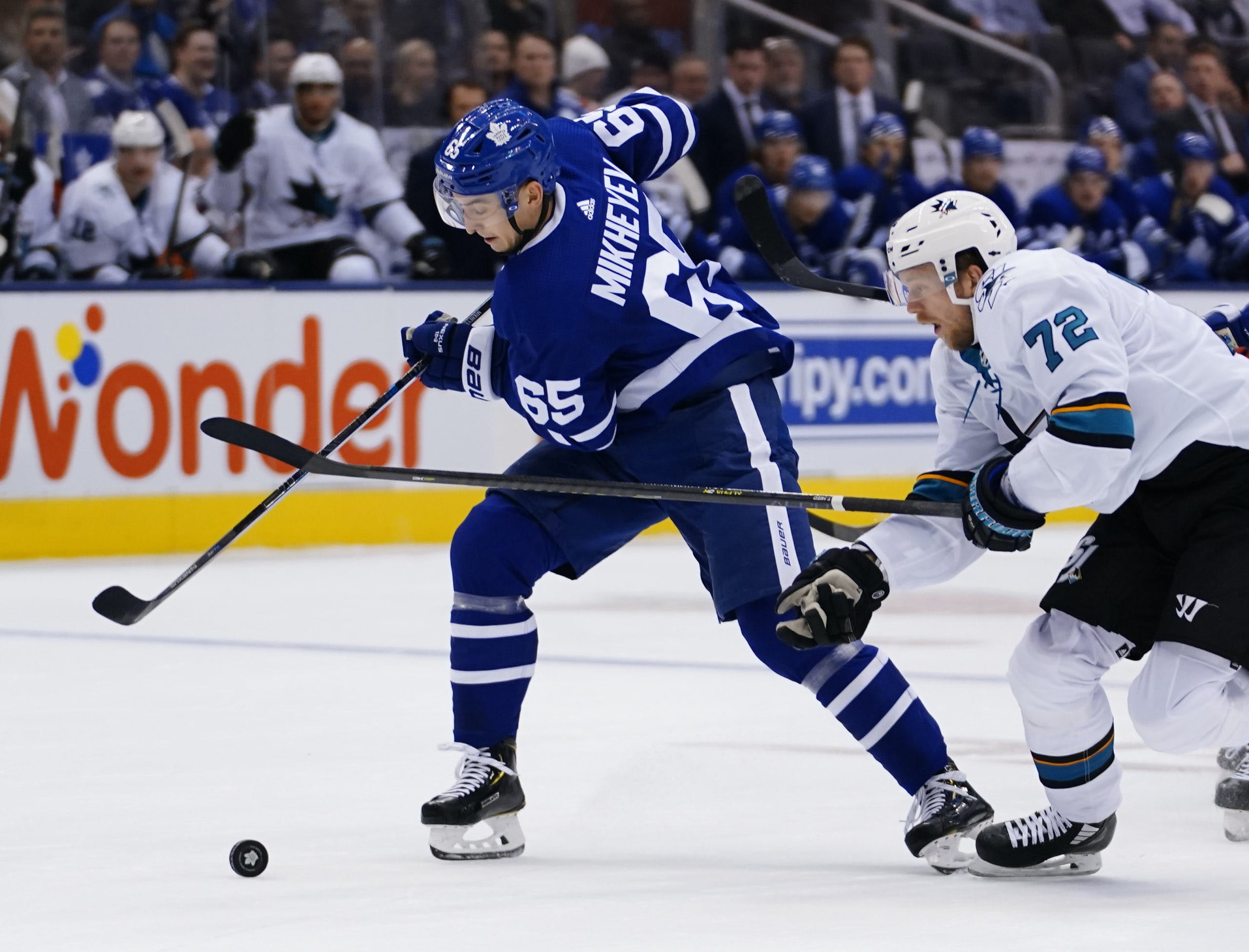 Photo credit: John E. Sokolowski-USA TODAY Sports
By Ryan Hobart
2 years ago
Comments
The surprise emergence of @Ilya Mikheyev last season seems like it was fun for everyone involved (except the goalies he scored on). Coming over from Russia, he immediately found a role as a top-6 forward playing a more energy role, like @Zach Hyman does on whatever line he’s playing on.
At 5-on-5 last season, Mikheyev scored 6 goals and 15 assists. He also rose to fame with a simple comment on soup, earning him an endorsement with Campbell’s.
That’s why Ilya Mikheyev’s number is 44.
Why? Because for an 82-game season, in what was his debut NHL season, he was on pace to score 44 points. And also, his commercial for Campbell’s soup is 44 seconds long (according to YouTube; nominally it is a 45-second commercial).
If you live under a rock and didn’t know, Mikheyev landed the deal with Campbell’s thanks to an innocent comment in one of his postgame interviews:

Talked about the adjustments to being in Canada now: “I like soup. I don’t know why you don’t eat soup. My girlfriend cooks for me, so I’m very happy.”

Toronto fans on Twitter exploded with excitement over this comment, as often is the case when a new player who is a bit of an enigma reveals something fun about their personality.
Advertisement
Ad
Advertisement
Ad
If you haven’t seen the commercial, or don’t want to for whatever reason, it’s an adorable video of him pretending to ask his mom for advice on how to make good tomato soup, meanwhile he just heats up a can of Campbell’s tomato soup and says it “reminds him of home”.
Ilya Mikheyev – Souperman – YouTube
What else is there to know about Ilya Mikheyev?
Toronto signed him to a 2-year contract extension this offseason worth $1.645M.
After an excellent rookie season, getting Mikheyev onto a very reasonable deal was a great win by the Leafs, especially considering that he’s locked in at that rate for two years. He was supposed to head to salary arbitration, as is his right under the collective bargaining agreement (CBA), but the Leafs and Mikheyev’s agent Dan Milstein were able to pen a deal before this happened.
Advertisement
Ad
Advertisement
Ad
He missed time due to a nasty injury caused by an unfortunate skate blade incident.
In the middle of the season, a little over 1 year ago on December 27 2019, Mikheyev’s wrist was sliced by the skate blade of Jesper Bratt. If you’re squeamish about these kinds of things, I don’t recommend watching the video below.
Ilya Mikheyev Has His Wrist Sliced By Jesper Bratt’s Skate – YouTube
Mikheyev was a staple in Toronto’s top 6 up to that point, and missed the rest of the regular season (31 games of the remaining 43, before the season was shut down due to the pandemic). He was able to return in time for Toronto’s play-in series with the Columbus Blue Jackets, where he was held without a point and played a little further down the lineup than he had been before the injury.
Advertisement
Ad
Advertisement
Ad
Kyle Dubas, the Leafs’ General Manager, earned some credit as a good human being for staying with Mikheyev in New Jersey for three days while he was being treated for his injury. Mikheyev, being from Russia, didn’t have a lot of close connections in North America to keep him company, so this was a really nice move by the Leafs’ GM.
He’s a good player.
We like Ilya Mikheyev around these parts because he’s a likeable person, but he’s also pretty good at hockey. This chart from EvolvingHockey shows that he’s good at generating shot attempts for the team, and isn’t a negative impact on allowing shot attempts against. It’s interesting that he’s rated so highly in shot attempts (CF_60) but not expected goals (xGF/60). This suggests that Mikheyev’s shots are generally not coming from a dangerous area.
Advertisement
Ad
Advertisement
Ad

Regardless, he’s a fun player to watch, so enjoy this highlight pack courtesy of Highlights NA.
All salary cap information courtesy of PuckPedia.com.
All stastics courtesy of Naturalstattrick.com.