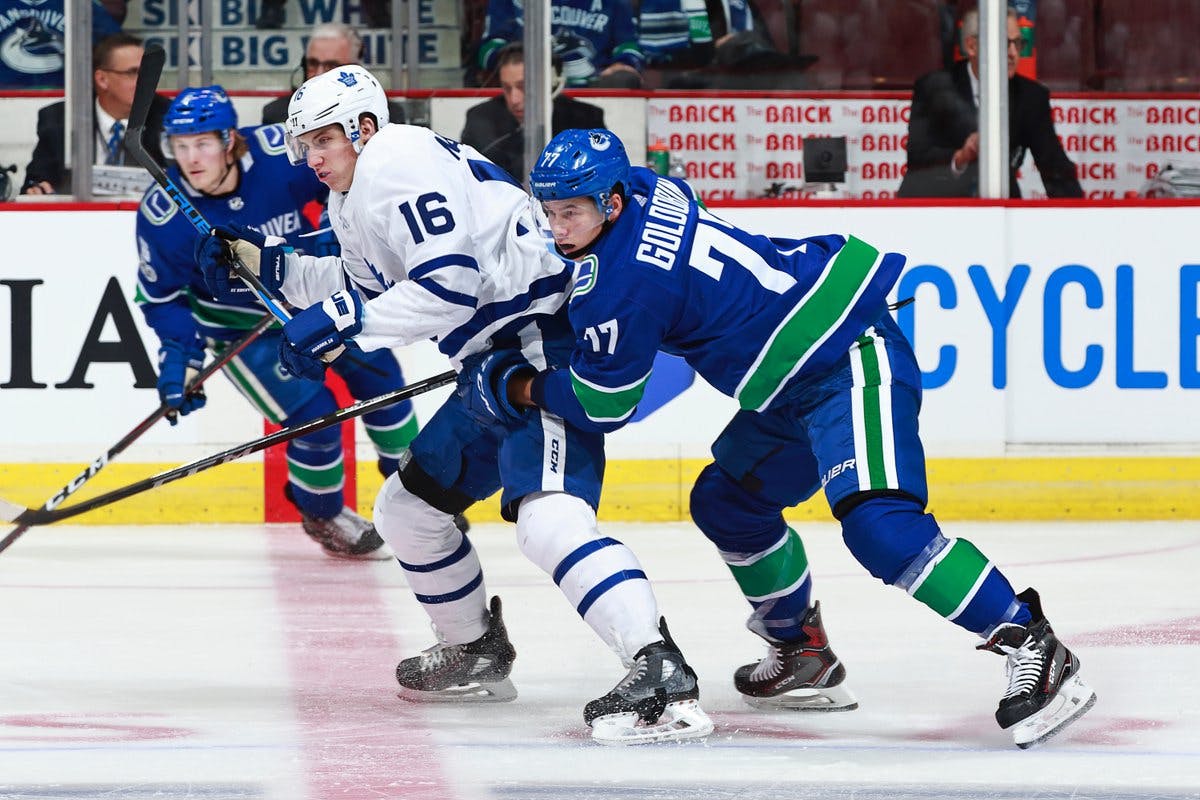 Photo credit: @Canucks
By Mer
1 year ago
Comments
It seems like every time I tell someone (or write in a pre-game) that I’m not too bothered by a couple Leafs losses, the team decides to pull a “hold my beer” and double down. So yeah, the Leafs are in a bit of a slump – to put it mildly. But the bright side, I guess, is that they’ve managed to steal a few points out of these losses.
It was only a matter of time before @Jack Campbell regressed a bit. His start this season was ridiculously impressive, and completely unsustainable. He’s also been bearing a heavy burden, suddenly a starter after coming off injury. Now, Sunday’s game was weird. There was that late Leafs goal that was definitely a goal but wasn’t counted as a goal, so the game went to OT where the Leafs lost. While the team could have played better, Campbell included, it wasn’t exactly some blowout loss, either.
Putting that aside, Sunday’s game also saw this hit on @Zach Hyman:

@Alex Edler was ejected from the game and subsequently suspended, and Hyman is expected to miss two weeks minimum with a sprained MCL.
Meanwhile, Leafs practice yesterday was….interesting.

Zach Hyman is out.
William Nylander is maybe out?
Ilya Mikheyev is…we’re not sure.
And Nick Foligno is soon to be in.

To sum up, it’s been quite a day in #Leafs land:https://t.co/W5tcB2XYpj

Wasn't going to play tomorrow because of it; that will be reassessed ahead of the game.

So everything seems fine.
Advertisement
Ad
Advertisement
Ad
Of course, on the other side we have the Canucks, for whom the game Sunday was the first back after a lengthy COVID pause. The players are still getting their fitness back, and some have mixed feelings about returning to play – understandably. @Braden Holtby did an admirable job in net, which is even more impressive given that he was coming back from having COVID, himself. They’ll look to make it 2/2 tonight.

Advertisement
Ad
Advertisement
Ad
With the later start time on the east coast, we won’t get official word on who is minding each net until later today. For now, we can assume the “starters”, Campbell and Holtby, will be in goal tonight. Holtby had a great showing Sunday, stopping 37 (or 36 depending how you look at it) of 39 shots. Meanwhile, Campbell was decent, stopping 21 of 24. The Leafs offense is going to need to step it up a bit if they want to cleanly win games without debatable goal calls hurting them. Overall this season, Campbell still has a very respectable 0.919 SV%, and Holtby is sitting at a  0.899 SV%. Jack has struggled his last few starts, so we’ll see if he can get back into the W column tonight.
Catch the action tonight, 9pm EST on Sportsnet.