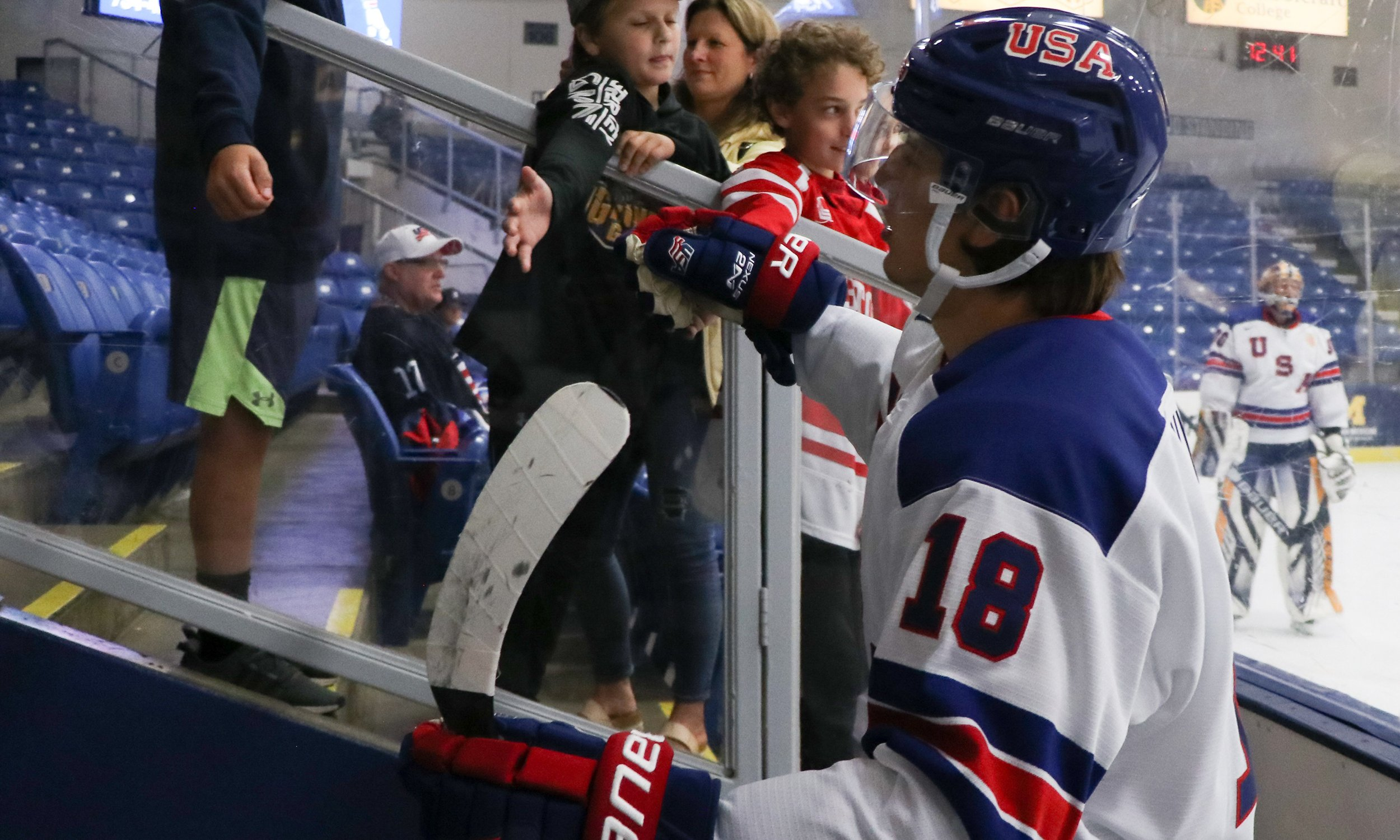 The entire hockey calendar has been turned upside down during the pandemic but things are finally beginning to get back on track, signified in part by the return of the World Junior Summer Showcase at the end of July. Canada didn’t send a team this year, however, opting to hold their own split-squad camp at home due to COVID related travel concerns.
The event included teams from Finland, Sweden, and a pair of squads made up of American-born players. The Leafs had three prospects participate in the WJSS; Roni Hirvonen and Topi Niemelä of Finland who were drafted in the second and third rounds, respectively, of the 2020 draft, and 2021 second-round pick Matthew Knies who suited up in games for both USA Blue and USA White.
Hirvonen and Niemelä were big pieces for Team Finland at last year’s World Juniors, and their performances at the WJSS only cemented their status as leaders for this year’s squad. Knies, for his part, put Team USA brass on notice with his strong showing and put himself in a good position to make the final cut in December.
Roni Hirvonen | C/W | Finland
Hirvonen had a huge tournament playing alongside Aatu Räty and Kaspar Simontaival, finishing second in WJSS scoring with eight goals – including a pair of hat tricks – and two assists in just six games. He was a monster on the power play, scoring four of his eight goals with the man advantage, proving dangerous as a shooter from the flank.
Advertisement
Ad
Advertisement
Ad

Roni Hirvonen (TOR) scores his second goal of the game after a brilliant quick cross-ice feed from Aatu Räty (NYI) to make it 3-2 for Finland. #Isles #LeafsForever #Leafs pic.twitter.com/agmkgpugSW

We saw at last year’s World Juniors that despite his size, Hirvonen excels down low and doesn’t shy away from the dirty areas. He played a strong forechecking game throughout the event, helping to create and maintain possession for his linemates.
While he showed the ability to score from the outside, perhaps the more sustainable part of Hirvonen’s offensive game is his ability to come up with loose pucks and score from in close.

Roni Hirvonen scores his second power play goal of the game to give Finland a 2-1 lead. Kasper Puutio with the assist. #WJSS #Leafs #FlaPanthers pic.twitter.com/wjzXICnyhq

It isn’t always about simply being in the right place at the right time, either, as Hirvonen showed off his hands and shot from in tight as well. On this play, he makes himself available at the side of the net, and rather than just jamming it into the crease, he takes the time and space the defenders provide before roofing the puck from just above the goal line:
Advertisement
Ad
Advertisement
Ad

Roni Hirvonen ties the game between Finland and USA Blue at 1-1. That's his first goal of the World Junior Summer Showcase. Aatu Räty and Topi Niemelä pick up the assists on the power play tally. #WJSS #Leafs #Isles pic.twitter.com/12jQ0zDyTK

Hirvonen was a key part of Finland’s team at the last World Juniors and he is a safe bet to reprise his role as a prominent figure on this year’s squad as well. He might not be able to sustain the shooting percentage that saw him score eight times in six games at the WJSS but the rest of his game makes him a valuable player, even if he isn’t able to find the score sheet with regularity. His ability to read the game allows him to keep up with more talented players, his forechecking and physical game is constantly disrupting opposing defenders, and he has enough skill of his own to capitalize when given the chance. Look for him to have another strong showing at the World Junior Championships this winter.
Advertisement
Ad
Advertisement
Ad
Matthew Knies | W | USA Blue/USA White
Knies’ role increased throughout the event and he may have been the biggest surprise of the showcase when all was said and done. Over the course of five games, he averaged almost 19 minutes of ice time per game while being a focal point on the power play and contributing to the penalty kill. He finished the event with four goals and three assists.
Knies had a difficult start to his draft season after contracting COVID and struggling to get into a rhythm with an uncertain schedule upon his return but really found his game in the second half of the season, and carried that over to the World Junior Summer Showcase. Opponents often appeared overmatched by Knies’ size and strength down low, and he displayed the offensive skills that helped him rack up 12 goals and 10 assists in his final 14 regular season games with Tri-City.
Advertisement
Ad
Advertisement
Ad

Matthew Knies steals the puck away and displays crafty stick skills, but Arizona prospect Rasmus Korhonen is able to make the save. #WJSS #Yotes #Leafs pic.twitter.com/pNxr5U8ye0

Knies is known for being tough along the boards and coming away with contested pucks, and his puck protection skills are advanced for his age as well. He often wreaks havoc down low around the opposing net but he also showcased his ability to create off the rush during the event.
In the clip below, he takes advantage of the over-committed defender in the neutral zone and displays good straight-line speed to drive to the net while shielding the puck from the oncoming back pressure to get a shot off:

Nice burst by Knies on this play to accelerate as he jumps around the over-committed defender in the neutral zone to create a good chance off the rush while protecting the puck: pic.twitter.com/ctKjXmsh4U

In my review of the Maple Leafs’ 2021 draft class, I noted that while Knies’ shot is growing into a legitimate weapon, added deception and quickness on his release would make him a more dangerous scorer from the outside. Over the course of the WJSS, his shot appeared more dangerous than it was even at the end of the USHL season and he was able to beat goaltenders cleanly on a couple of occasions.
Advertisement
Ad
Advertisement
Ad
It isn’t just the heavy shot on this play, though. It is everything leading up to him being in a position to shoot that puck that is really impressive. He battles through a check to maintain possession for Calgary Flames first-rounder Matthew Coronato, but keeps his feet moving and boxes out his check as he finds a pocket to receive a slick feed from Coronato before rifling it home:

#LeafsForever prospect Matthew Knies keeps the play alive, works into space, and unleashes a bullet for his second goal of Wednesday's contest against Sweden.

He now has two goals and three assists through three games at the World Junior Summer Showcase. pic.twitter.com/oBrUOj3TKJ

He also had this snipe to tie the game against Finland in the dying seconds:

Knies may have entered the tournament as a dark horse to make the American World Junior roster but the impact he had at the WJSS, as well as the steady improvement he has shown in the last few months, have placed him squarely in the mix to play a prominent role at the upcoming WJC. His well-rounded game and physicality make him a valuable piece that can play multiple roles for his team and no one should be surprised if he replicates his World Junior Summer Showcase performance when the real tournament gets going this holiday season.
Advertisement
Ad
Advertisement
Ad
Topi Niemelä | RHD | Finland
Niemelä was something of a breakout star at last year’s World Juniors, earning Top Defenseman honors while helping Finland take home the bronze medal. He missed most of the second half of the Liiga season following the WJC as the result of a shoulder injury but seemed to pick up where he left off, tying for the scoring lead among defensemen at the World Junior Summer Showcase with two goals and four assists in six games.

Topi Niemelä (TOR) makes it 2-1 for Finland in the middle of the third frame. Oliver Suni gets the primary assist. #Leafs pic.twitter.com/4bi17S6lBx

Niemelä drives play from the back end with good defensive reads and the mobility to elude oncoming forecheckers. His skating ability helps him maintain tight gaps in defensive transition because he can quickly recover on occasions where the play gets behind him. Check out this play against the US where he steps up on his man at the blue line to force a pass, and then turns to skate with him before picking off the return feed and starting a nice rush the other way:
Advertisement
Ad
Advertisement
Ad

He reads the play extremely well and has the vision to accelerate the breakout with long, crisp feeds. Niemelä picks his spots well and knows when to jump into the rush to create an odd-man situation. Watch as he maintains the center lane after hitting his man on the breakout, taking the space the opposition gives him, before following the play all the way to the net for the goal:

#LeafsForever prospect Topi Niemelä had a goal and an assist in WJSS action yesterday.

He starts off the breakout and drives the center lane all the way to the net to put home the rebound: pic.twitter.com/VViVYHqV1a

Niemelä played a huge role at the WJSS, averaging just under 24 minutes of ice time per game, including time on both special teams units, and appears locked in as Finland’s top defenseman heading into the World Juniors. He still needs to add strength to his slight frame to become a more effective in-zone defender but he is a willing combatant in front of his net and along the boards, and his size doesn’t hold him back as much against his peers as it does at the Liiga level. The strongest parts of his game are his skating and overall hockey sense, and those skills should put him in contention for top defenseman honors once again when the World Juniors get underway.
Advertisement
Ad
Advertisement
Ad
The Leafs have been without high-end draft picks in the last couple of years but it appears they have done well with their second and third-round selections in the 2020 and 2021 drafts. Hirvonen, Knies, and Niemelä aren’t quite knocking on the NHL door just yet but they have all shown signs of developing into useful NHL players in the coming years. Hitting on players outside the first round will be paramount to maintaining quality depth around the Leafs’ core of star players moving forward and the recent World Junior Summer Showcase was a small taste of what Toronto could have joining their roster in the future.
(Statistics from InStat and USAhockey.com)