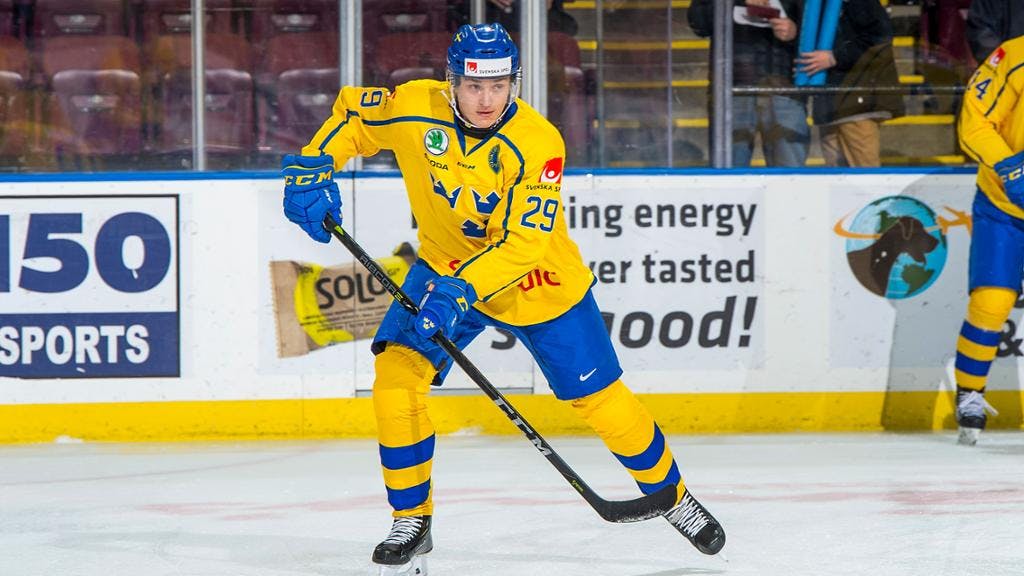 Photo credit: nhl.com
By Nick Richard
1 year ago
Comments
The Maple Leafs announced on Friday that the team has signed SHL playoff MVP Pontus Holmberg to a two-year entry level contract. Holmberg was selected by the Leafs in the sixth-round of the 2018 NHL draft and has spent the last three seasons playing for the Växjö Lakers of the Swedish Hockey League.

Holmberg tallied nine goals and 14 assists through 45 regular season games, earning Swedish Forward of the Year honors, and picked up his offensive production in the playoffs, scoring seven goals and seven assists in 14 games to help lead Växjö to an SHL championship. He also suited up in a pair of games for Sweden at the recent World Hockey Championships, earning valuable international experience. The Leafs will loan the 22-year-old forward back to Växjö for the 2021-2022 campaign where he will once again be a key piece for one of the SHL’s top teams.

Pontus Holmberg has done it again!!!! The #LeafsForever prospect scores in overtime to give Vaxjo a 3-1 series lead in the #SHL Finals!

Holmberg is an intelligent two-way center that skates well and takes advantage of his offensive opportunities, but he isn’t going to wow anyone with high-end offensive skill. He makes good reads both with and without the puck and rarely makes the risky play, earning the trust of his coaches to play in all situations. Not an elite shooter, Holmberg helps mitigate that by getting the puck into scoring areas and takes a high percentage of his shots from dangerous spots.
Advertisement
Ad
Advertisement
Ad
The young Swede will look to build off a strong 2020-2021 season and make a push for another SHL championship as he prepares to make the jump to North America in 2022. Holmberg has the tools to develop into an effective bottom-six forward option for the Leafs in the coming years but he will first have to prove his SHL success can translate to the AHL when he begins his career with the Marlies.
(Statistics from EliteProspects.com)