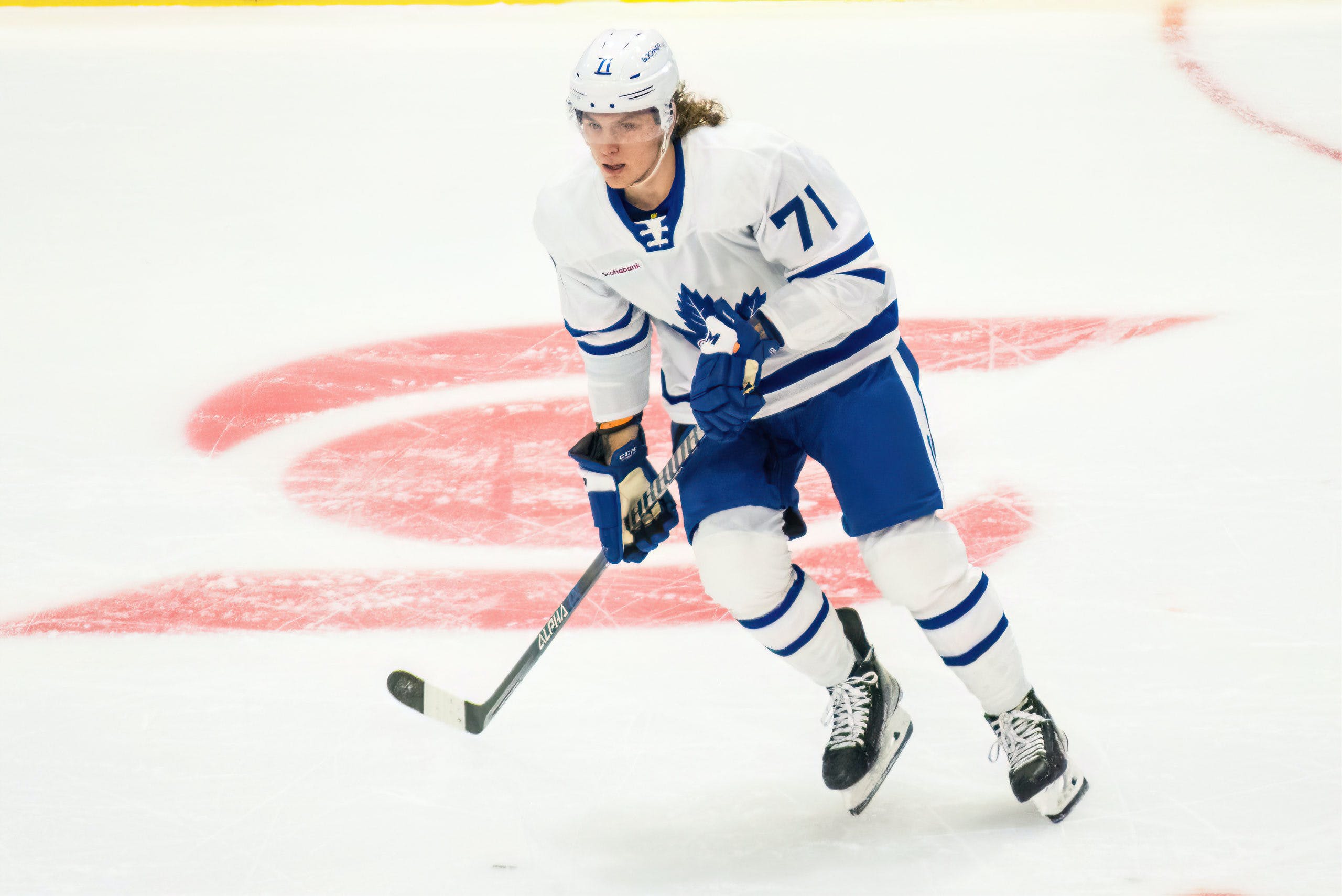 Photo credit: Steven Ellis/The Leafs Nation
By Nick Barden
16 days ago
Comments
There was a sigh of relief around the Maple Leafs when Adam Gaudette cleared waivers back in October.
Toronto signed the 26-year-old to a one-year, league minimum contract when the NHL’s free agency period opened. It was clear that he was going to be a depth piece, yet down with the Marlies, he’s brought much, much more.
Gaudette has had a fairly interesting start to his season down in the AHL. He’s scoring at a near goal-per-game pace — with eight goals in 11 games for Toronto — a 52-goal pace over an entire AHL season.
When I asked Marlies head coach Greg Moore about how Gaudette has been able score at the rate he has this season, he said: “Shooting the puck,” with a smile.
The 26-year-old forward has spent a majority of his season on a line with Alex Steeves and Pontus Holmberg, who’s now up with the Maple Leafs. Playing with those two, Gaudette has been able to generate more chances on goal — complementing them in the same ways they do for him.
Advertisement
Ad
Advertisement
Ad
Steeves and Holmberg are very skilled at getting the puck from the defensive zone and transporting it up ice. Gaudette is then able to use his deceptive speed and strength to cut wide on his opponent and then drive the net for a scoring chance.

Adam Gaudette with a great individual effort and Alex Steeves tries to jam in the rebound for the #Marlies.

Somehow this puck stays out of the net. pic.twitter.com/dJgdbDSRB4

“He’s done a good job to keep his feet moving through the middle of the rink, driving wide, getting to the net.” Moore elaborated on Gaudette. “And putting himself in spots in the offensive zone where he can get those second opportunities.”
If there’s not a chance for Gaudette to beat the opposing player on the outside, he’ll often use his slick hands. The 26-year-old doesn’t use them fairly often, but when he does, the success rate is usually high.
Advertisement
Ad
Advertisement
Ad

Adam Gaudette showing off the hands in his first game with the #Marlies. pic.twitter.com/7huzKEx1qw

The 26-year-old has great hands, whether it’s in tight spaces or if he’s got a little more time with the puck. After he pulls the puck to a certain spot, Gaudette will then shoot his shot. And with a shooting percentage of 18.6, that shot usually finds its way into the back of the net.

Adam Gaudette with an incredible shot that beats Max Lagace for his second goal of the season.#Marlies tie the game at one with a power play goal. pic.twitter.com/sCe31AR89C

“He has a heavy shot.” Moore stated.
Gaudette has always been the type of player to score goals and bring assists to the table at the same time. In his Hobey-Baker-winning year, and final year at Northeastern University, he put up 30 goals an 30 assists in 38 games.
Advertisement
Ad
Advertisement
Ad
Then, in his second NHL season with the Vancouver Canucks, Gaudette scored 12 goals and tallied 21 assists for 33 points in 59 games.
That’s what makes this season with the Marlies so fascinating. The 26-year-old is scoring at a pace that he’s never done before at the pro level. A good sign for the player, but also a great sign for the Maple Leafs if they ever need to call him up.
We’re only 11 games into the season, so there’s likely to be some regression coming. However, it shouldn’t be that big of a drop in production since his shooting percentage over the course of his AHL career is 16.3%, which is only two percent lower than it is at the moment.
Gaudette, this season, has a fairly similar stat line to his performance with Team USA at the IIHF World Championships earlier this year where he had six goals and two assists in 10 games. That was a moment where the 26-year-old caught the eye of Toronto.
Advertisement
Ad
Advertisement
Ad
“He was excellent at Northeastern, and when he came out with Vancouver, he had that over 30 points in 50-some games. And he’s had a few years where it’s not gone as smoothly for him.” Maple Leafs GM Kyle Dubas said back in July. “I thought at the World Championships for the U.S., he really showed that form that he had when he first came out from Northeastern, and looked to be confident again, and empowered a little bit with Team USA.
“It’s one of these bets we make a few times every summer.”
And early on for Toronto, that bet seems to be paying off.