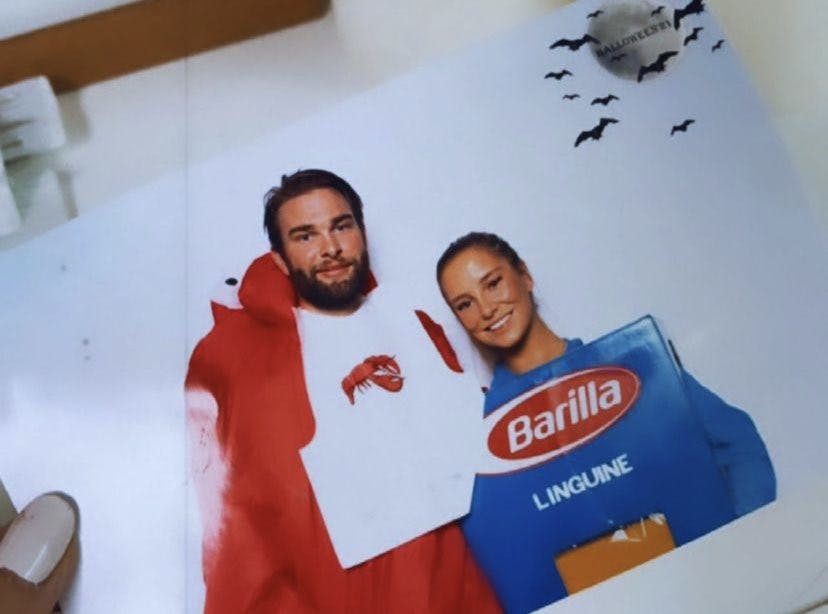 Photo credit: INSTAGRAM: @ASHLEYSONNEY
By Roxanne Khasow
1 year ago
Comments
The cool weather is here, gourds are a plenty, hockey is finally back, and spooky season is upon us. The Toronto Maple Leafs celebrated Halloween a little early this year according to their social media accounts with a food-themed costume party. Let’s take a look at their costumes and see what some of the Leafs came up with.
Nick Ritchie and Erica

nick ritchie will never not be funny to me but him and his girlfriend, erica, went as colonel sanders/kfc and wendy’s to the leafs halloween party + a bonus blurry wag group photo 🥰 pic.twitter.com/N1NTrEA8Kl

Not going to lie, we’re off to a good start with Ritchie’s costume. The pair decided to bring the battle of fast food to life with their Wendy’s and KFC inspired costumes. Add a cloak and a wand, and I feel that Ritchie’s costume could double as a wizard, too.
Alexander Kerfoot, Ilya Mikheyev and Kristina

So does this confirm that KFC is the Leafs’ go to cheat day meal? I think so, to be honest. Alexander Kerfoot took a page out of Ritchie’s book and also went as Colonel Sanders. Ilya Mikheyev took a different route and appears to be a bucket of KFC chicken, while his wife also dressed up as Colonel Sanders. Maybe the Leafs should have signed a helmet deal with KFC instead, who knows.
Advertisement
Ad
Advertisement
Ad
Jake Muzzin and Courtney

the theme for the leafs halloween party was food, the muzzins were banana bread and jack & ashley went as red lobster 🤍🍌🍞🦞 pic.twitter.com/1dEvCGL8DA

Now we’re getting to my favourites of the bunch. I really like this combo, it’s creative and I feel like any and every one can relate, because who hasn’t made banana bread in the past year? Muzzin in a hat shaped like a piece of bread made me laugh, so I hope you enjoyed it as well …But the question must be asked, do we think Muzzin is a chocolate chip banana bread fan, or not?
Justin Holl and Audrey

what in the midwest was the holl’s halloween costume pic.twitter.com/zMb89DGNrj

Took me a second to figure this one out, but I’m pretty sure that Holl and his wife are buttered corn, and I love it. As a fan of all things corn and big Halloween costumes, I’d say that this pair hit it out of the park.
Advertisement
Ad
Advertisement
Ad
Jack Campbell and Ashley

jack campbell really loves red lobsters crab linguine so much he went as it for halloween I can't 😂😭 pic.twitter.com/XJgT0aWkXX

If I don’t see an ambassador deal with Jack Campbell and Red Lobster soon, I’m going to be very disappointed. I guess Campbell hasn’t had the chance to take the boys out for a nice Red Lobster dinner yet, so he brought Red Lobster to them! The lobster and linguine combo is perfection, this is without doubt another one of my favourites from the night.
Mitch Marner and Stephanie

so mitch and steph went as a cow and a burger for the leafs halloween party that they hosted! assuming it’s bc she’s the queen and he is the king per the stickers. and zeus is a taco! what a good looking family 😊🤍 pic.twitter.com/6mgo6PiSgx

Marner and Stephanie take the crown with this one, no pun intended. Marner dressed up as Burger King, Stephanie is the Dairy Queen, and Zeus is Taco Bell! Zeus adds the perfect touch to their costumes and makes this my favourite from the Leafs’ Halloween celebrations.