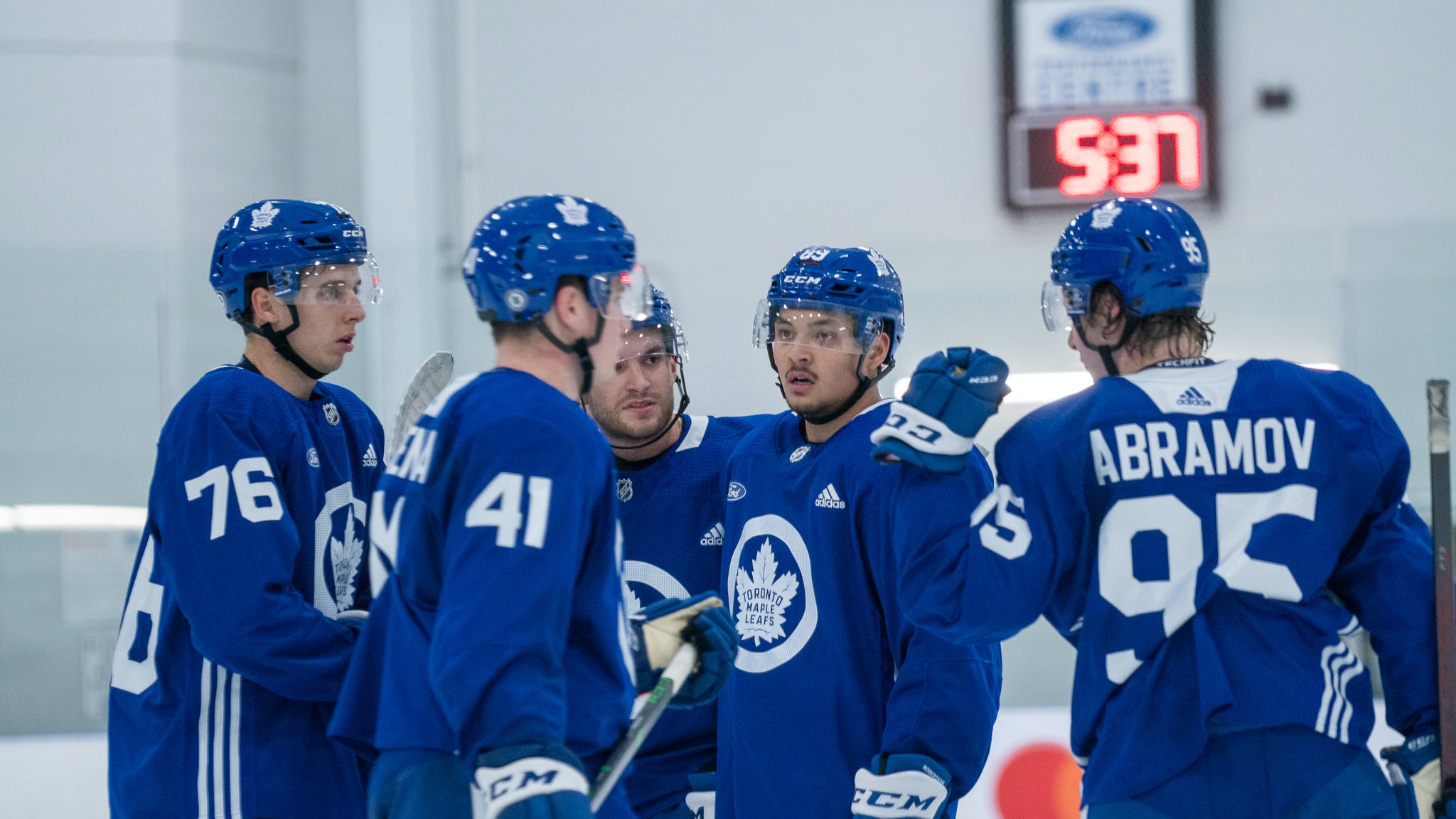 Photo credit: @MapleLeafs
By Kyle Cushman
1 year ago
Comments
Day 2 of the Toronto Maple Leafs development camp is in the books.
The halfway point of development camp was marked by the first of two scrimmages to take place during the four-day event, as well as media availabilities from @Semyon Der-Arguchintsev, @Pavel Gogolev, and Ty Voit.
I’m not sure why, but unlike years past the scrimmage between Team Blue and Team White was not live-streamed and no game recap has been posted. Instead, we got select clips on the Maple Leafs Twitter feed, of which not even each goal was shared.
Regardless, here are the highlights we did actually get from the first scrimmage of development camp, a 5-4 victory for Team White:
Team White Goal, 1-0: Jacob Guevin (No highlight)
Team Blue Goal, 1-1: Nick Robertson from Braeden Kressler
Advertisement
Ad
Advertisement
Ad

Gogolev with the dish, Steeves with the finish 🚀 pic.twitter.com/hbq4IRHoI2

Without having seen the full game or even full highlights, it’s difficult to get a full read on who performed and who didn’t. Each goaltender played a period, with invite Braden Holt the lone netminder to not allow a goal.
Easily the best line was Team Blue’s Robertson-Abramov-Kressler unit. Robertson scored a hat trick, Abramov added a goal and an assist, and invite Braeden Kressler had a couple of nice assists on Robertson goals. They were the only offence for Team Blue, a lineup that did feature other notable players in Marlies signings Jeremy McKenna and Curtis Douglas, as well as entry-level contract candidates James Hardie and Theo Rochette.
The best performance from the first scrimmage is obviously Nick Robertson with his birthday hat trick, but the biggest winner is easily Braeden Kressler. A 2021 draft-eligible prospect, Kressler did not get to show his talents to NHL scouts in his draft year with the OHL’s cancellation. In 2019/20, his Draft -1 season, Kressler had a respectable 18 points in 46 games in a depth role with the Flint Firebirds.
Advertisement
Ad
Advertisement
Ad
It was a surprise to see an invite playing with Robertson and Abramov, but Kressler didn’t miss on the opportunity. It remains to be seen whether he will stay with them into the second scrimmage and later the rookie tournament, but as it stands Kressler seems to be the invite making the biggest impression with the Leafs staff. I’ve said numerous times that I believe Toronto should look to supplement their small draft class by signing an invite. Braeden Kressler’s performance on Day 2 of camp makes him the early clubhouse favourite.
Now on to the quotes, as we heard from Semyon Der-Arguchintsev, Pavel Gogolev, and Ty Voit.

“I pretty much played in every league that is possible except for the NHL. It was a good experience everywhere and I learned something new.”

“I did gain some kilograms. Hopefully I don’t become slower. That was the biggest thing for me this summer, to get stronger and be more ready.”

“She tells me that I need to gain some weight, to be more confident and be more dominant on the ice without the puck. I’m a centreman, I need to play defence and that’s the biggest thing I need to learn. It’s going to help me to win faceoffs if I get bigger. Also to shoot the puck more and get on the inside a bit more.”

“The camp’s been well so far. Like all of the players have been saying, it’s a world-class organization and it’s been fun. I’m on a line with [Semyon Der-Arguchintsev] so we’re getting some chemistry down here.”

“It’s great to be in a place like this. It’s a world-class organization. To come to a facility like this, it really hits you that you’re with the Toronto Maple Leafs.”

“I saw it as a huge opportunity to help me on the ice, I need to get bigger and it worked to my advantage. I was in the gym as much as I possibly could be and I came out with the result I was looking for. I’m happy with that part of where I am…and there’s so much more for me to do and get bigger.”

“I don’t think too many places do it like they do it here, it’s a world-class organization. When it comes to coming to the rink and seeing everything laid out for you and the video they have prepared, it’s pretty cool to see as a young guy seeing this for the first time. It really shows that you’re here with the Toronto Maple Leafs.”

Advertisement
Ad
Advertisement
Ad
The group is back in action on Sunday from 10:15-11:15 am EST for their final on-ice development session before camp wraps up on Monday with a second scrimmage.