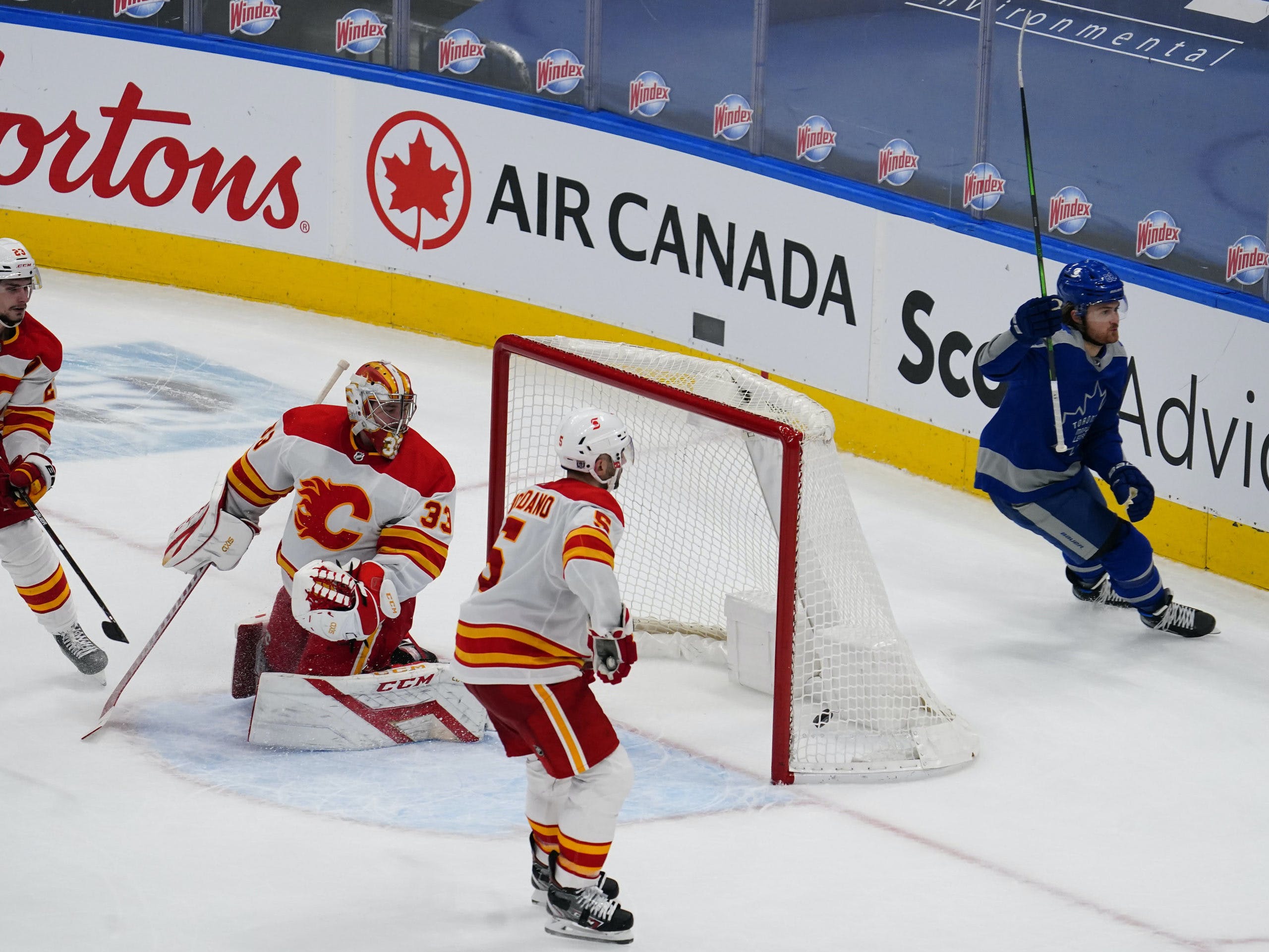 Photo credit: John E. Sokolowski-USA TODAY Sports
By Brendan Mori
1 year ago
Comments
The Toronto Maple Leafs defeated the Calgary Flames by a final score of 2-1 in OT on Wednesday night. @William Nylander scored both goals for the Leafs, while @Andrew Mangiapane scored for the Flames.
Flames goaltender @David Rittich was the star of this two-game set. Rittich turned aside 71 of 73 shots fired on goal, including a 34 save shutout on Monday night and stopping 37 of 39 tonight. After a scary game Monday night, @Michael Hutchinson had a very nice rebound performance, stopping 21 of the 22 shots he faced.
Tonight’s game looked like it was headed that way as well. Rittich stole the show throughout the game, making highlight-reel stops on @John Tavares and @Ilya Mikheyev in close. Hutchinson wasn’t tested as often as Rittich, but he was able to close the door when called upon.

What a chance by Tavares from Matthews pic.twitter.com/M6p5C32RpR

The scoring didn’t start until the final three minutes of the third period. The Leafs failed to get the puck out of their own end, causing them to scramble defensively. Tkachuk found Mangiapane all alone in the slot and he’s able to fire a wrist-shot off the left post and in, just before Nylander is able to get back and lift his stick.
Advertisement
Ad
Advertisement
Ad

At this point, I was ready to turn the TV off. While the Leafs were getting chances throughout the game, something just looked off with the team again. The passes weren’t as crisp, the team as a whole was lacking jump for a majority of the game and everyone looked out of sync on the powerplay. This was also the team’s seventh game in 11 days. Fatigue was definitely a factor tonight as well.
With just over two minutes to go in the game, the Leafs pull Hutchinson for the extra attacker. Rielly floats a shot on net that drops right in the crease. There’s a mad scramble and elite net-front presence Willy Nylander jams home the loose puck to tie the game.

In overtime, the Leafs decided they should probably score again. @Auston Matthews dropped the puck to a flying Nylander who waltz’s into the Flames zone and roofs it up under the bar to give him two goals on the night and the game-winner.
Advertisement
Ad
Advertisement
Ad

It would be easy to go with Nylander, but I wanted to give some recognition to a guy Leafs Nation is probably not that fond of. I thought Hutchinson was good tonight. Obviously, way better effort from him than what we saw Monday night. The most important thing is that he gave the team a chance to win tonight. You can’t ask for much more than it being 0-0 with three minutes left in the third period.
Honourable mention to Alexander Barabanov. That’s two straight games now where I’ve noticed Barabanov on the ice actually doing something with the puck other than skating it into the corner and pulling a turnback move.

I’ll be honest, I was pretty stoked the Leafs signed Vesey this offseason. I thought he would be a good reclamation project that could contribute at least 10 goals.
Advertisement
Ad
Advertisement
Ad
With every passing game, not only am I being proven wrong, but I’m also seeing Vesey tread into Frederik Gauthier territory. What I mean by that is he’s becoming just “a guy” on the Leafs He contributes next to nothing offensively, he’s decent defensively and so nothing really happens when he’s on the ice because of it.
Also Sheldon, please take him off of the Powerplay.

"He gets misunderstood all the time. And I think the guys in the locker room know how much he cares, and how much he wants to win. I can't speak higher of him."

William Nylander on if he thinks he's misunderstood:

"I don't really read or anything what you guys write. I try to put my work in as good as I can every day at the rink and battle."

We love you Willy.

The Leafs travel to Alberta to take on the Edmonton Oilers on Saturday night. Puck drop is at 7:00pm EST on Sportsnet.