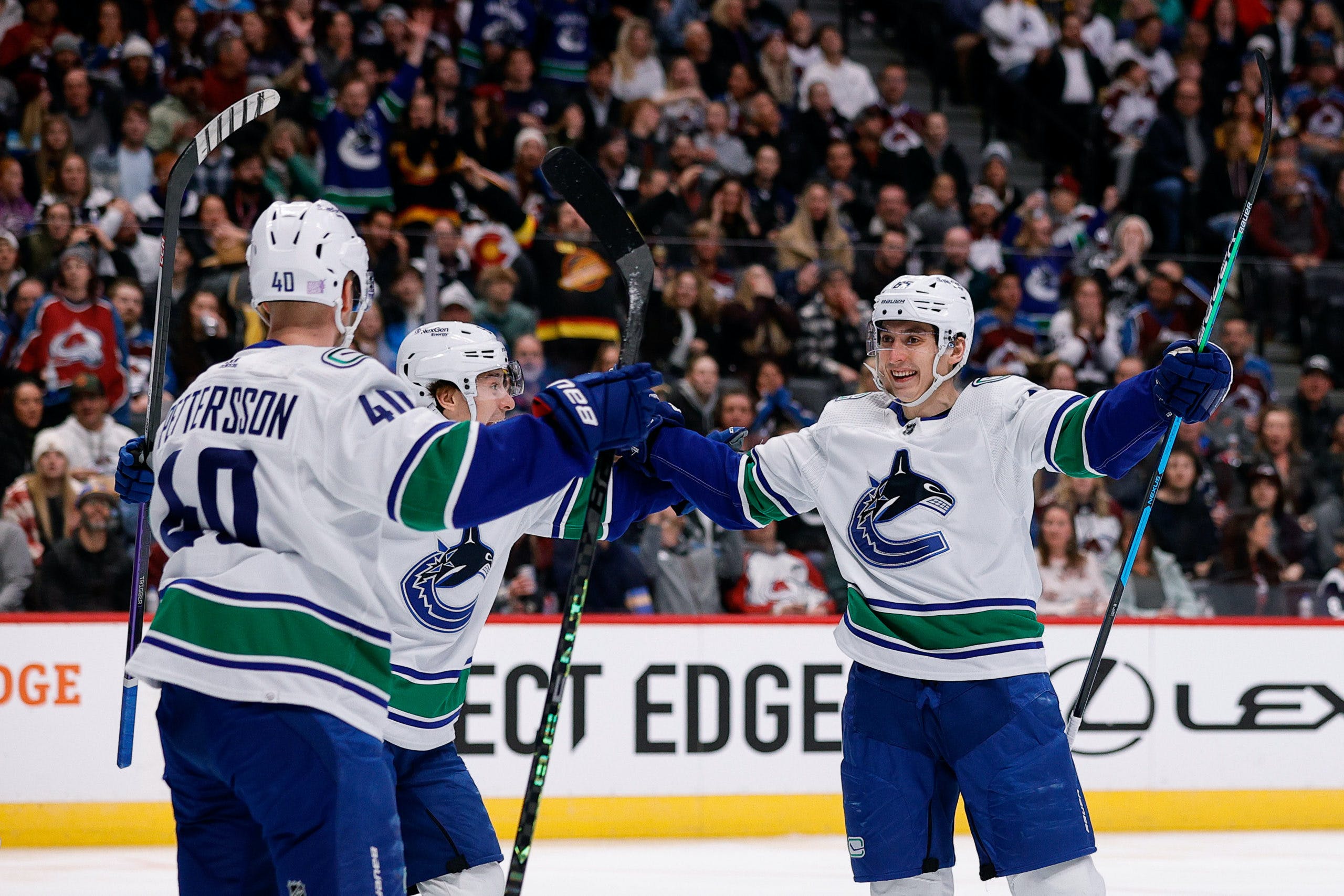 Photo credit: Isaiah J. Downing-USA TODAY Sports
By Joseph Zita
1 month ago
Comments
At the beginning of November, I wrote about six former Maple Leafs and how they have been performing with the new teams that they either signed with in the off-season or in Petr Mrazek’s case, got traded to in the off-season.
From guys like Jack Campbell with the Oilers to Colin Blackwell with the Blackhawks, I went over all six players, how they played in the month of November, as well as their season totals through the season’s first two months.

November 2022 stats: 6 GP – 3-3-0 – 4.16 GAA – .863 SV% – 0 SO
2022-23 stats: 12 GP – 7-5-0 – 4.04 GAA – .875 SV% – 0 SO
Contract: 5 years x $5M
Just like the month of October, the month of November wasn’t good for Jack Campbell, and after signing that big five-year contract as a free agent to join the Oilers in the off-season, it’s safe to say Campbell hasn’t been able to live up to that price tag and its kind of concerning if you ask me.
Advertisement
Ad
Advertisement
Ad
Back at the start of November, I said he would be able to snap out of the poor stretch of games, and so far, it looks like I’m wrong because this hasn’t been just a poor stretch of games, it has been the majority of the 12 games of poor performance from Jack Campbell, and sooner rather than later, if he continues this, no one should be shocked if Stuart Skinner becomes the Oilers’ starting goalie for the foreseeable future.
In six games last month, he grabbed a record of 3-3-0, which isn’t terrible by any means, but it’s his other numbers that are just downright ugly. A 4.16 GAA and a .863 SV% in six games won’t win you many games, let alone any. However, luckily he’s on the Oilers, and that team can obviously score themselves out of problems almost every single night.
Advertisement
Ad
Advertisement
Ad
On top of those six games and his other games in October, his overall numbers through two months of the season aren’t good. Overall he’s played in 12 games posting a positive record of 7-5-0 but a 4.04 GAA and a .875 SV% with zero shutouts to his name.

November 2022 stats: 14 GP – 4 G – 4 A – 8 PTS – 16:55 TOI
2022-23 stats: 20 GP – 6 G – 7 A – 13 PTS – 17:02 TOI
Contract: 4 years x $4.75M
After cashing in on a pretty big deal this past off-season to sign with the Vancouver Canucks, Ilya Mikheyev has found success in Vancouver and has been playing pretty good hockey for them while being on one of the better lines in hockey. After suiting up for six games in the month of October and registering five points in those games, he has now recorded eight points – four goals and four assists – in 14 games this past month, while averaging just shy of 17 minutes of ice time a night.
Advertisement
Ad
Advertisement
Ad
Now, we all know what Mikheyev brought to the ice when he played in Toronto. His speed, defensive awareness and elite penalty killing were very impressive for fans to watch, but so far this season on a line with fellow Russian Andrei Kuzmenko and 2017 fifth-overall pick, Elias Pettersson, these three have been putting up points and are among one of the best 30 offensive lines in the league, according to MoneyPuck.com
Over his 20 games to start the season, Mikheyev now has six goals and seven assists for 13 points, putting him on pace to crush his current career highs in all three categories. He is currently on pace to finish the season with 24 goals and 28 assists for 52 points. Now there’s obviously a chance he doesn’t crush his current career highs and his pace could slow down, but it’s great to see him finding success in a consistent top-six role with the Canucks this season.
Advertisement
Ad
Advertisement
Ad
He is also on their second power-play unit and first penalty-kill unit, so it’s great to see him being used in all situations on top of his top-six role with Vancouver.

November 2022 stats: 5 GP – 0-4-1 – 4.60 GAA – .880 SV% – 0 SO
2022-23 stats: 8 GP – 1-5-1 – 4.27 GAA – .878 SV% – 0 SO
Contract: 2 years x $3.8M
Just like his 2021-22 season with the Toronto Maple Leafs and his first month as a member of the Chicago Blackhawks, Petr Mrazek’s month of November hasn’t been quite the one to remember and continues to struggle between the pipes. As we all know, Mrazek wasn’t a free agent and didn’t sign with a new team, however, though, he was traded on day one of the 2022 NHL Draft along with Toronto’s first-round pick (no. 25) to Chicago for their second-round pick (no. 38)
Advertisement
Ad
Advertisement
Ad
Toronto dealt the Czech goaltender away because of this reason and also due to the fact that he was sidelined with injuries for quite a bit last season and of course, was also sidelined for a bit this season due to a groin injury at the beginning of the season. On top of that and his poor play in the crease, it’s a good thing Kyle Dubas and company were able to ship him off to Chicago and get his contract off the books.
However, despite Chicago being in a clear rebuilding phase and currently sitting last in the Central division with a record of 6-12-4, their goalies have been playing somewhat pretty well other than Mrazek. Alex Stalock, Arvid Soderblom and Dylan Wells (one game) all have better numbers this season compared to Mrazek.
Advertisement
Ad
Advertisement
Ad
Stalock: 7 GP – 3-2-1 – 2.93 GAA – .914 SV%
Soderblom: 9 GP – 2-5-2 – 3.24 GAA – .905 SV%
Wells: 1 GP – 0-0-0 – 3.00 GAA – .923 SV%

November 2022 stats: 11 GP – 0 G – 0 A – 0 PTS – 15:36 TOI
2022-23 stats: 17 GP – 0 G – 1 A – 1 PTS – 15:24 TOI
Contract: 2 years x $2.75M
It’s been somewhat of an injury-riddled start to the season for former Maple Leafs defenseman, Ilya Lyubushkin. He suffered a lower-body injury back in October and missed four games due to it. Well now, he has been sidelined again due to an undisclosed injury and missed Wednesday’s game against the Detroit Red Wings and there isn’t a current timetable for his return.
Advertisement
Ad
Advertisement
Ad

Sabres received positive news regarding the injury to Ilya Lyubushkin.

His scans were clear, now the team will see how he responds before setting a timeline for his return. #LetsGoBuffalo

He isn’t putting up a ton of points, let alone basically any, except for his one assist, but he isn’t known for being that type of defenseman. However, through his first 17 games as a member of the Sabres, he’s doing exactly what he was brought in to do for this young team. He’s blocking a ton of shots, he’s laying a bunch of hits, and he’s being a serviceable second/third-pair defenseman for Buffalo.
After signing that two-year contract with the Sabres in the off-season and given their hot start to the season followed by losing a bunch of games, I wonder if the Sabres could maybe flip him at the deadline to get a draft pick or something in return. The Sabres have eight NHL calibre defensemen on their roster with Rasmus Dahlin, Mattias Samuelsson, Owen Power, Henri Jokiharju, Casey Fitzgerald and Lawrence Pilut with Lyubushkin who is obviously sidelined and Jacob Bryson who is also sidelined with an injury and is on IR.
Advertisement
Ad
Advertisement
Ad

November 2022 stats: 10 GP – 0 G – 1 A – 1 PTS – 12:44 TOI
2022-23 stats: 19 GP – 0 G – 3 A – 3 PTS – 12:24 TOI
Contract: 2 years x $1.2M
It hasn’t been the start I thought Colin Blackwell would have with the Chicago Blackhawks but there are definitely a ton of games remaining for him to get back on track. In the month of October with his new team, he played in nine games and recorded just two points, both being assists.
In November he suited up 10 more games and registered just one less point than his October total to slowly improve his season total to three points in 19 games thus far. However, given the team that he signed with and the fact that it was only a two-year deal, I wouldn’t be surprised if the Blackhawks end up dealing him at or close to the deadline to a contending team, just like how the Kraken shipped him along with Mark Giordano to the Maple Leafs last trade deadline.
Advertisement
Ad
Advertisement
Ad
He won’t wow you with his offensive abilities but he’s definitely a serviceable forward for any team’s bottom-six and could even maybe slot in on the wing on some top-six lines. He’s tenacious on the forecheck, will lay the body when needed and rack up some hits while he’s out there on the ice.
For $1.2M per year for this season and next, it isn’t the worst price tag out there, especially if Chicago retains half, then Blackwell would honestly be a great addition to any team at that price, in my opinion.

November 2022 stats: 0 GP – 0 G – 0 A – 0 PTS – 0:00 TOI
2022-23 stats: 1 GP – 0 G – 0 A – 0 PTS – 11:02 TOI
Contract: 1 year x $1.5M
Advertisement
Ad
Advertisement
Ad
It really hasn’t been the type of season Ondrej Kase or any hockey fan wanted to see from him thus far. Only being able to suit up for one game this season, Kase has been sidelined with a concussion since the beginning of October and has yet to play an NHL game this season.
As we all know, he has a history of concussions, and with the Maple Leafs last season, he suffered one that sidelined him for a while. As of right now, there is no timetable for when he could return to the Hurricanes lineup.
The latest update we really have of Kase is from Walt Ruff who is a team reporter for the Hurricanes. In a tweet from November 16th, head coach Rod Brind’Amour said Kase isn’t close to getting back into the lineup along with two other players.
Advertisement
Ad
Advertisement
Ad

"Nobody's close to getting back."

The head coach did confirm that Teuvo's upper-body injury is not a concussion though.

(All stats from Hockey-Reference.com)