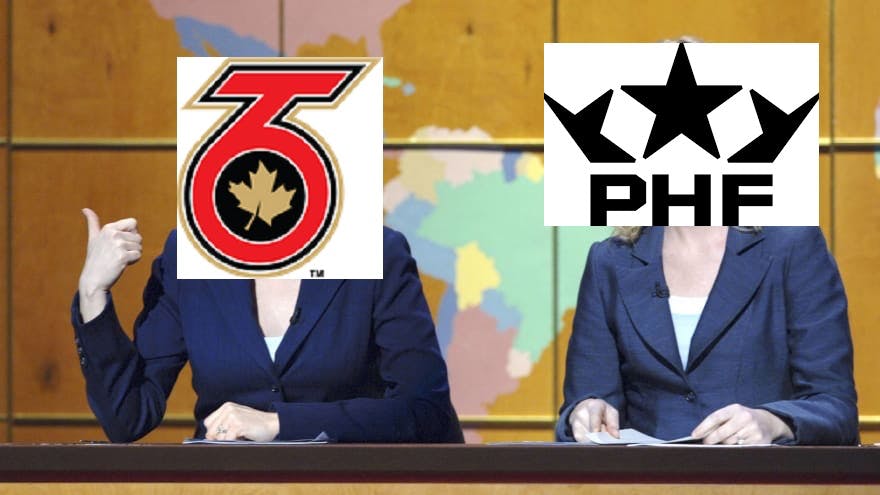 By Ryan Hobart
11 months ago
Comments
The Toronto Six were back in action this weekend after some time off for the All Star game and a bye week the week after, taking on Allie Thunstrom and the Minnesota Whitecaps.
Toronto was at home this weekend for a pair of games against Minnesota.

On the Six’s Hockey Fights Cancer game, here was the lineup they went with:

It was Minnesota who got on the board first in this one, as the aforementioned Thunstrom CAPped off this fantastic passing play:

The Whitecaps held that lead into the second period, where Natalie Marcuzzi, who recently rejoined the team, got the score evened up:

Natalie Marcuzzi picks up her first goal of the season with a great second effort! pic.twitter.com/gsVLHkK3h9

It didn’t take Minnesota long to retake their lead, as just over a minute later they got their second goal, this time from Audra Morrison. But, Emma Woods got Toronto tied up, then it was Mikyla Grant-Mentis with two goals, including this tip in the slot on a Stephanie Sucharda shot, giving the Six a 4-2 lead at the end of the second:
Advertisement
Ad
Advertisement
Ad

THERE is that Toronto Six offence we know! pic.twitter.com/UfMYPJ9e3r

Toronto continued to run away with this one into the third period, after Emma Woods hit the scoresheet again with this slick backhand goal:

Emma Woods picks up her second goal of the game! pic.twitter.com/aSxNm0aswH

Then Natalie Marcuzzi got her second of the game to make it 6-2 for the Six, on a great pass from captain Shiann Darkangelo to set up the bottle-popping one timer:

Darkangelo with a gorgeous set up for Marcuzzi and the Six have 6! pic.twitter.com/IPwrFCWoZN

The Six put up 43 shots against Minnesota’s Jenna Brenneman, earning her 3rd star of the night despite allowing 6 goals. She certainly did her best, but the Six’s offence is just too potent. For Toronto, Elaine Chuli was great again, saving 25 of 27 shots against.
They should change their name to the Toronto Two after Marcuzzi, Grant-Mentis and Woods each had a pair of goals in this one.

In the double header weekend matchups typical of the PHF, the Six and Whitecaps faced off again, and Toronto went with the exact same lineup as above, top to bottom:
Advertisement
Ad
Advertisement
Ad

In this one, the team was focusing on Black excellence, with February being Black history month.
The Whitecaps once again got on the board first, with Audra Morrison getting her second goal of the weekend to give Minnesota the lead:

Jonna Curtis puts this puck on a platter for Morrison and the Whitecaps break the deadlock! pic.twitter.com/N0GLbrKVTj

But, Toronto’s Brooke Boquist answered before the end of the period to tie it up, off of a great drive to the net, which started with a great forecheck by Mikyla Grant-Mentis:

Boquist gets Toronto even with an incredible effort! pic.twitter.com/sPveXcUPY9

In the third period, Meagan Beres clapped home this one-timer off of a drop pass on the rush, which felt like a classic hockey play:

This was a bit of a goaltending contest, as both Elaine Chuli and Jenna Brenneman played great in their second starts in 2 days, clearly earning 1st and 3rd stars in this one. Beres got the 2nd star for her smashing effort and third goal of her rookie season.
Advertisement
Ad
Advertisement
Ad

As stated in the title, the Six climbed into 1st place in the league again, after the Connecticut Whale had gotten ahead of them but had the weekend off, allowing Toronto to gain ground. Toronto still has one game in hand over Connecticut with 7 games to go. They will finish the season on a clash with those same Whale, in a doubleheader I’m really looking forward to.
Grant Mentis still sits atop the league in scoring after a 4 point weekend took her to 26 for the season. She is 7 points above the next best, Connecticut’s Kennedy Marchment, who has become a star already in her first year in the PHF.
Toronto’s next contest will be against the Buffalo Beauts, in Buffalo, on an afternoon 3pm start on a Monday, for President’s Day in the US. It is also conveniently Family Day for most of Canada, including Ontario. The game will be broadcast on TSN in Canada, and ESPN+ in the US. Hopefully you will tune in with me to root on the Six!
Advertisement
Ad
Advertisement
Ad
Also, it’s Valentine’s Day so do something nice for someone you love today.
More from theleafsnation.com: