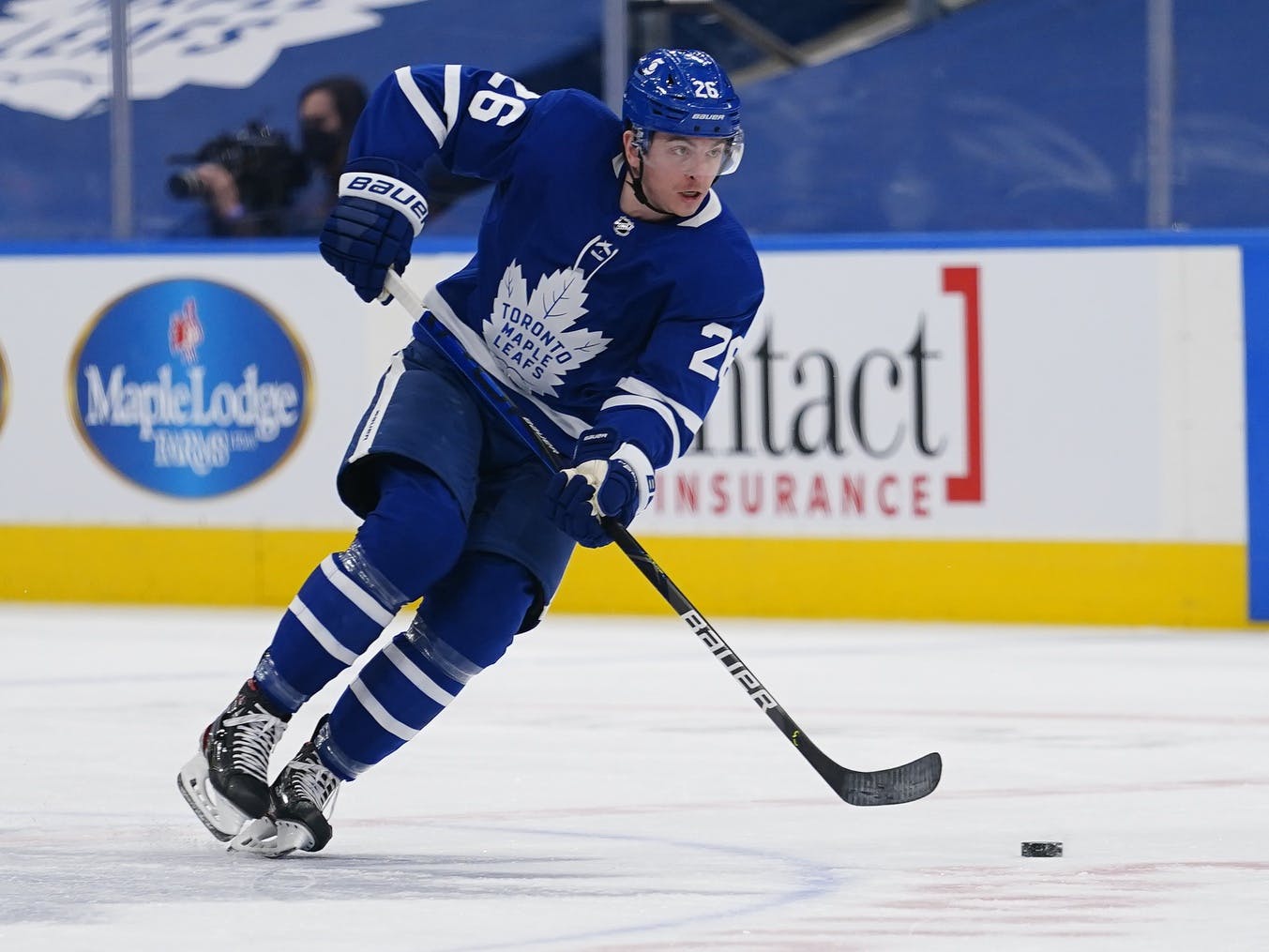 Photo credit: © John E. Sokolowski-USA TODAY Sports
By Michael Mazzei
1 year ago
Comments
As the Leafs made their final preparations before taking the flight to Edmonton to begin a five-game road trip, Friday’s practice saw quite a lot happen.
First off, it sounds like Sheldon Keefe is going to make a line change that fans have been longing to see happen:

It sure sounds like Jimmy Vesey will be scratched for the first time with the Leafs. Three points in 21 games is woof.

It’s been a tough start to the @Jimmy Vesey era in Toronto and his lacklustre production combined with a consistent struggle to find a permanent spot in the lineup hasn’t helped either. Keefe told the media that while Vesey’s defensive abilities have kept him in the lineup, he has also had trouble making his mark and finding a role he can provide on a consistent basis. This could be interpreted as a challenge to get Vesey to step-up his game or be moved to the taxi squad.
Advertisement
Ad
Advertisement
Ad
While this may be due to @Auston Matthews missing today’s practice (more on him later), perhaps sitting out Vesey for a game or two may give him the motivation to get his season back on track. Otherwise, it’s becoming more likely that he will need to sign with another team in the offseason.

The Leafs won’t have to wait much longer for their starter and backup goaltenders to make their returns:

Jack Campbell starts for the Leafs tomorrow, as long as he feels good to go tomorrow morning.

@Jack Campbell got injured during the Leafs’ tilt against the Calgary Flames back on January 24th and was able to finish the game despite being in noticeable discomfort. While @Michael Hutchinson (who rocked an awesome new mask that pays homage to Felix Potvin) has played well in his past two starts, getting back Campbell is no doubt a huge boost to the lineup. Whether he actually gets the start tomorrow remains up in the air but he appears set to be activated off the injured reserve list in the coming days.
Advertisement
Ad
Advertisement
Ad
@Frederik Andersen’s status is also to be determined, but Keefe did announce that he will be travelling with the team out west. He did skate prior to the start of practice and appears on track to make his return by next week at the earliest.
Either way, I’m sure Mer is extremely relieved about these latest developments.

Matthews out, Thornton and Muzzin in?

After colliding with the boards with his wrist midway through Wednesday’s win over the Flames, Matthews was absent at today’s practice and was listed as day-to-day. It likely was nothing more than a maintenance day, but Keefe said that the star centre will be a game-time decision.

Sheldon Keefe on other injured parties: It looks "positive" towards Thornton and Muzzin playing tomorrow, but along with Matthews they will be game-time decisions

Advertisement
Ad
Advertisement
Ad
Speaking of game-time decisions, it appears that @Jake Muzzin and @Joe Thornton will be making their returns to the lineup on Saturday. Muzzin skated with a face shield which will likely be in effect for the next few games until his broken bone is fully healed. Thornton, who had been skating for the past few days, told the meeting that he is “feeling really good” and looking forward to rejoining his team.
Here are the lines Toronto rolled with during today’s practice:

#Leafs start practice with some 3-on-3; these were the lines:

@Alexander Barabanov played well in the two-game tilt against Calgary after being promoted to the top-six in the wake of Thornton missing time. He has earned another look and could soon translate that into offence should he carry over the momentum from Wednesday’s contest (he was put on the second power-play unit as the net-front presence). With Vesey likely being a healthy scratch, @Nic Petan is projected to start the game on the fourth line in his place.
Advertisement
Ad
Advertisement
Ad
@Alex Galchenyuk is still working with the Leafs development staff and Keefe said the team is in no rush to put him into the lineup. When he actually does get into game action is currently a mystery, but perhaps his Leaf debut might be around the corner.