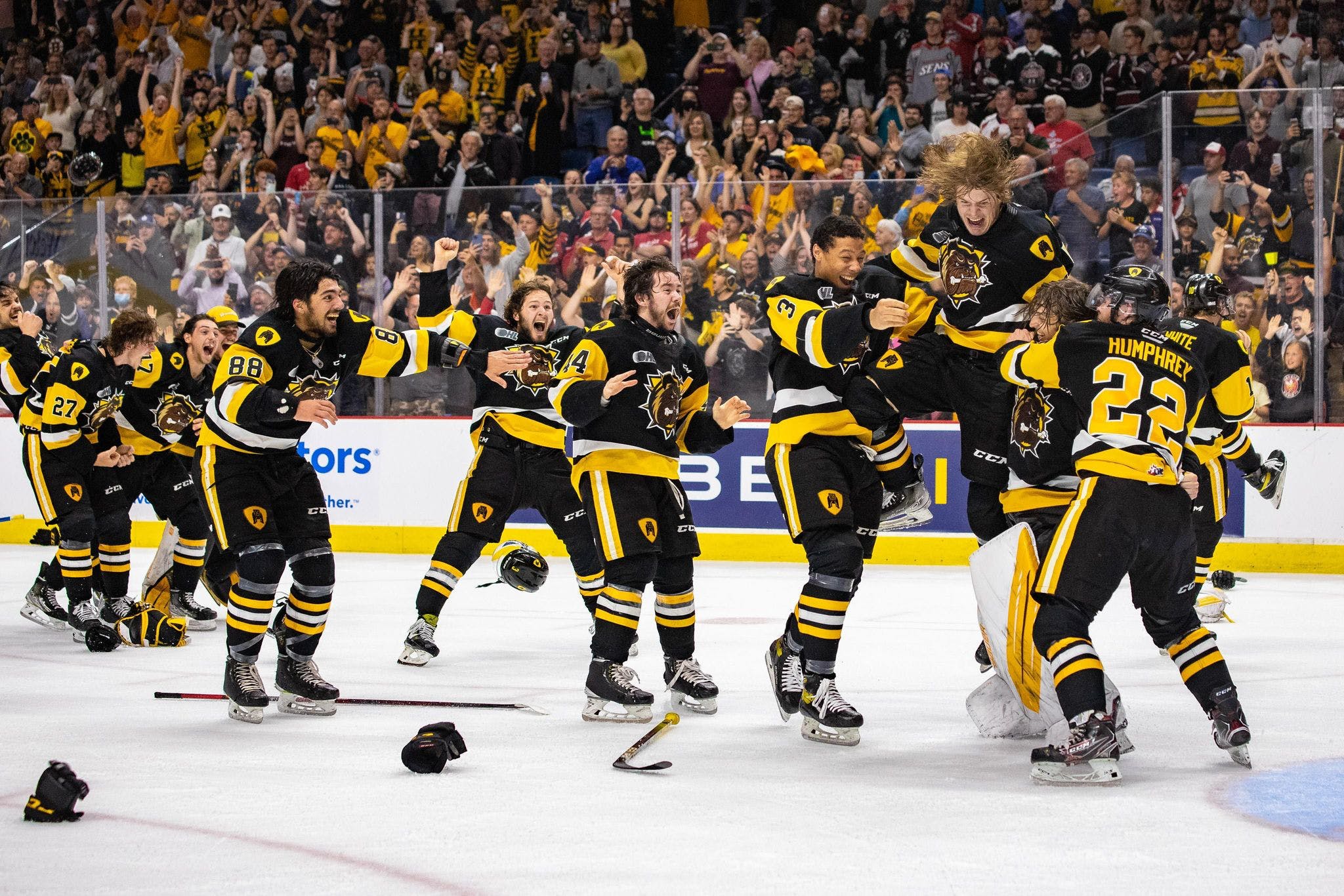 Photo credit: @BulldogsOHL / Twitter
By Kyle Cushman
7 months ago
Comments
The 2022 Memorial Cup kicks off on Monday! Overlapping with the Stanley Cup Finals this year, it’s easy to see how you could overlook or miss the tournament entirely, but this is not one to be slept on.
The Memorial Cup is consistently one of the most electric tournaments on the hockey calendar. Returning for the first time since 2019 and boasting numerous top prospects, including one from the Toronto Maple Leafs organization, this is going to be a tournament you don’t want to miss out on.
Let’s introduce you to the four teams competing for what may just be the hardest trophy in hockey to win.

The WHL champion Edmonton Oil Kings boast quite the array of high NHL draft picks. An impressive four of the eight NHL-affiliated prospects on their roster were drafted in the first round.
As such, it’s not much of a surprise to see that the Oil Kings steamrolled their way to the WHL Finals. Entering the postseason as the #2 seed in the Eastern Conference, they swept Lethbridge and Red Deer in the first two rounds before facing off against the regular-season champs in the Winnipeg Ice.
Advertisement
Ad
Advertisement
Ad
It was a one-sided affair, as Edmonton brushed aside Winnipeg in just five games to enter the WHL Finals with a 12-1 postseason record.
Matching up against the Western Conference’s #4 seeded Seattle Thunderbirds in the finals, Edmonton was given their toughest test of the playoffs, being pushed to six games. Still, the Oil Kings prevailed and booked their ticket to the Memorial Cup for the first time since 2014, when they won the tournament.

His name is Kaiden Guhle and he's taking the #WHLChampionship by storm!

The Hamilton Bulldogs saw the Edmonton Oil Kings’ 12-1 record heading into their championship round and decided to do them one better.
The Bulldogs demolished the OHL’s Eastern Conference, sweeping Peterborough, Mississauga, and North Bay en route to the OHL Finals. It was an unbelievable stretch of hockey for the Bulldogs, but awaiting them in the finals for a trip to the Memorial Cup was the top seed out of the Western Conference in the Windsor Spitfires.
Advertisement
Ad
Advertisement
Ad
Unlike Hamilton, the Spitfires had been tested entering the finals. They survived a bit of a scare against #8 seed Sarnia in the first round when they were pushed to six games, before easily dealing with #7 seed Kitchener. In the Conference Finals, however, Windsor was pushed to the brink against the #3 seeded Flint Firebirds, taking a Game 7 victory on home ice.
That momentum carried over into the OHL Finals, where they handed Hamilton their first loss of the postseason in an overtime Game 1. The series would go back and forth through the first four games until the Bulldogs took Game 5 at home, only for Windsor to come back and also defend home ice in Game 6 to force a Game 7.
Hamilton came out swinging for Game 7, defeating Windsor 6-1 with a couple of late empty netters to drive home the result. With a blend of dynamic young talent in addition to some of the top overage players in Ontario, Hamilton will be a force to be reckoned with in the Memorial Cup.
Advertisement
Ad
Advertisement
Ad
The Bulldogs will be looking for the franchise’s first Memorial Cup. They finished third at the 2018 edition of the tournament, the only appearance at the Memorial Cup prior to this year for Hamilton since the franchise relocated in 2015.

Despite being a guaranteed participant in the Memorial Cup as hosts, the Saint John Sea Dogs, just like any host, were hoping for a long playoff run to help prepare them for the stakes and pressure of the Memorial Cup.
Instead…they lost in the opening round.
What ensued makes the Sea Dogs one of the ultimate wild card teams in recent Memorial Cup history. Saint John shockingly fired their head coach Gordie Dwyer following their first-round exit, replacing him with University of New Brunswick head coach Gardiner MacDougall.
Advertisement
Ad
Advertisement
Ad
With no games and a month to work with the team prior to the Memorial Cup, MacDougall’s impact on the Sea Dogs remains to be seen. What we do know is that Saint John already boasted some of the top offensive pieces in the CHL and with a new coach at the helm, it’s easy to see a scenario where they catch fire at home and give the champions out of the OHL, QMJHL, and WHL a lot of trouble. Only the Winnipeg Ice scored more goals across the entire CHL in 2021-22. Don’t sleep on the Sea Dogs just because they were eliminated early in the QMHL playoffs.
The Sea Dogs return to the Memorial Cup for the first time since 2017, looking for their second-ever title having won back in 2011.
Advertisement
Ad
Advertisement
Ad
Players to Watch

After sweeping Rouyn-Noranda and Gatineau in the first two rounds of the QMJHL playoffs, the Shawinigan Cataractes had quite the task ahead of them entering the semi-finals. Standing in their path to the Memorial Cup were the regular-season champion Quebec Remparts and the runner-ups out of Charlottetown, a daunting task for the #7 seed.
In the semi-finals against Quebec, Shawinigan came back from a 3-1 third-period deficit in the pivotal Game 5 to take the series when it seemed as though the Remparts had it all wrapped up.
Then, despite being the #7 seed out of the QMJHL compared to Edmonton’s #2 ranking and Hamilton’s regular-season championship, Shawinigan defeated Charlottetown in the shortest of the three CHL championship series. That’s not to say the series wasn’t incredibly close, as Shawinigan won three games in overtime to take the QMJHL championship.
Advertisement
Ad
Advertisement
Ad
It was a fascinating postseason for the Cataractes, one that saw them go 7-0 in overtime games. This path sees them enter the Memorial Cup as more of an underdog compared to the champions out of the OHL and WHL, but if anything is to be learned from their run, do not let them force OT.
Shawinigan heads to the Memorial Cup for just the second time, having won the tournament in 2012 as hosts.

SHAWINIGAN CATARACTES WINS IT IN OT! 🚨

Players to Watch
More from TheLeafsNation.com