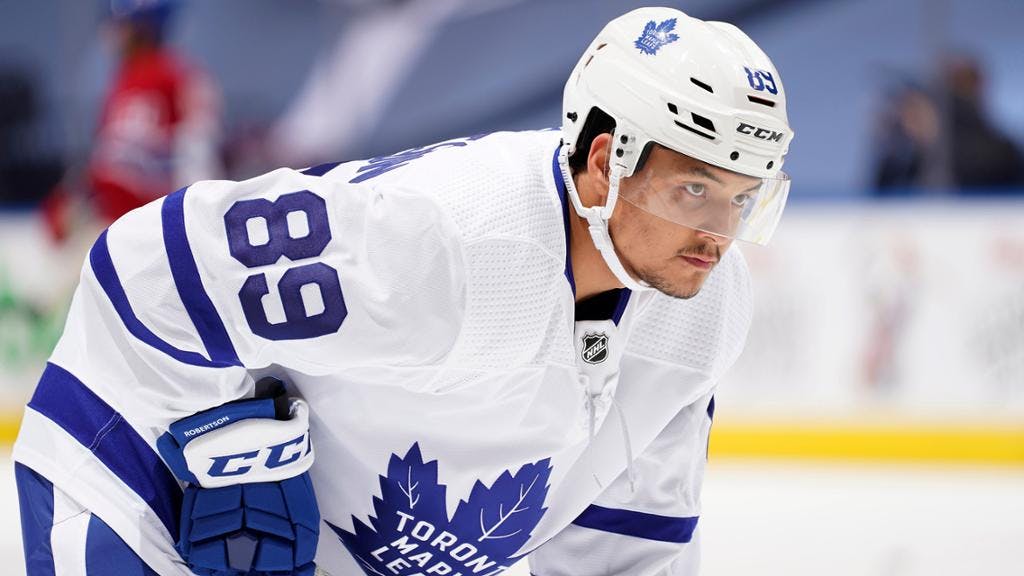 Photo credit: NHL.com
By Nick Richard
2 months ago
Comments
It looked like a mismatch on paper heading into Friday night’s preseason tilt between the Leafs and Senators in Belleville, with Toronto icing what could generously be termed their “B squad” and Ottawa dressing a number of their top players, but the Leafs came away with a 6-3 victory following strong performances from a handful of players who are battling for NHL jobs.
The Leafs got off to a strong start, taking an early 3-0 lead off of goals from Nick Robertson, Nicolas Aubé-Kubel, and Victor Mete. Robertson’s tally was a great showcase of what he could bring to the Leafs’ lineup – a legitimate quick-strike scoring threat with a release that can beat NHL netminders from distance. He corralled a difficult pass in the high slot and, in one fluid motion, whipped the puck past Anton Forsberg and into the Senators’ net.
Advertisement
Ad
Advertisement
Ad

The torque that Robertson gets on this shot after receiving the puck behind him with his arms stretched out is not normal. pic.twitter.com/kPmZkwbFiL

Aubé-Kubel extended the lead less than a minute later, banging home a rebound after Forsberg was unable to handle a shot from Zach Aston-Reese off the rush. Mete wasted little time piling on, wiring home a shot from inside the blue line to get on the board against his former team.
Toronto also carried the physical play in the early part of the contest with Aubé-Kubel and Aston-Reese, among others, aggressively finishing their checks on the forecheck. Wayne Simmonds, who finds himself in a battle for an NHL roster spot, connected with a big open-ice hit on Thomas Chabot in the neutral zone, drawing the ire of Austin Watson on the next shift.
Advertisement
Ad
Advertisement
Ad

A first period timeout by head coach D.J. Smith seemed to help settle the Senators, and they managed to chip away at the Leafs’ lead before the end of the frame. Ilya Samsonov was unable to knock down a hard dump-in behind his net and couldn’t recover in time to stop Parker Kelley all alone in front.
The second period didn’t begin with quite the same frenetic pace as the first, but the teams traded a handful of chances before Drake Batherson brought the Sens within one on the powerplay. As has been the case for most of the preseason, the Leafs’ powerplay was denied a response on a late opportunity of their own after Robertson drew a cross-checking call to finish off a strong offensive zone shift.
Advertisement
Ad
Advertisement
Ad
Toronto regained their two-goal lead nine minutes into the third period. Robertson continued his best performance of the preseason by hammering a one-timer from the point that found iron and landed in the blue paint behind Forsberg, where Denis Malgin was able to fight through traffic and slide the puck across the goal line. Robertson would add on with his second of the game in the dying moments of the third period, darting through the neutral zone on the powerplay and regaining the puck as he cut to the slot before snapping a shot into the back of the net.

Nick Robertson has the passion pic.twitter.com/fVo46eUm59

Justin Holl would add an empty netter moments later before Angus Crookshank squeaked one through Samsonov in the waning seconds of the third to make it 6-3, but that was as close as the Senators would get as the Leafs’ “B Squad” caused fits for them all night long.
Advertisement
Ad
Advertisement
Ad
Samsonov was mostly solid despite the three goals against, and made 27 saves to earn the victory. He made several difficult stops throughout the course of the game, including a couple of big saves on the penalty kill late in the third. The only real concern from his performance was that the Senators’ first two goals stemmed from his problems handling the puck outside of his net, and that will be an area of focus for him moving forward.
There were a number of solid showings from the Leafs’ hopefuls that suited up on Friday night, but the most notable performances came from three players who are squarely in the mix for spots on the opening night roster.
Robertson had his most complete game thus far, and on top of leading the offensive charge with a pair of goals and an assist, he battled hard on the forecheck, was effective carrying the puck up ice, moved it efficiently, and drew a couple of penalties. Of all the players battling for a spot, none of them possess the dynamic offensive skillset that Robertson does, and that was on full display during Friday’s contest. The fact that he is exempt from waivers could make him a victim of circumstance, but with each passing game, he is proving more worthy of an extended audition with the big club.
Advertisement
Ad
Advertisement
Ad

Robertson: "I think you can see I’m moving my feet more, trying to be more deceptive. That is the main confidence build I’m getting." #Leafs

Malgin might be the story of Leafs camp to this point, and though he had a couple of rough moments on Friday night, they were outweighed by his offensive contributions. Teaming up on Keefe’s first line with Robertson, Malgin continued to be effective in transition and at helping to sustain offensive zone possessions with quick puck movement. Considered by many as a longshot coming into the preseason, Malgin has made good on his opportunity and is inching closer to earning a spot on the opening night roster.
Advertisement
Ad
Advertisement
Ad
Victor Mete, signed as a depth option in the offseason, is suddenly in the mix for a spot on the opening night roster with injuries piling up on the Leafs’ blue line, and he didn’t hurt his case on Friday night. Besides scoring his first of the preseason, his speed and mobility were noticeable on the back end, and not just with the puck on his stick. On more than one occasion, Mete was able to use his speed to chase down contested pucks or close out oncoming attackers along the wall. He played big minutes in this one, including time on the penalty kill, and acquitted himself quite well against some of the best the Senators had to offer. Still just 24 years of age, Mete is an intriguing project who already has a wealth of NHL experience. If nothing else, he has put himself in a good spot to earn a look with another team if he ends up being placed on waivers by the Leafs at the conclusion of camp.
There were a couple of additional injury scares for Toronto in this one, with Samsonov taking a shot up high and laboring off the ice at the end of the first period and Filip Král heading to the dressing room following a blocked shot late in the second frame. Both players stayed in the game, however, and it appears the Leafs were able to escape unscathed.
Advertisement
Ad
Advertisement
Ad
With the Leafs off until Monday’s clash with the Canadiens, the first wave of cuts could be coming as early as Saturday. Toronto has just two preseason games remaining, and the coaching staff will likely be looking to get down to a more manageable number on their camp roster as they narrow down their final selections and continue to tune up for the regular season.
More From TheLeafsNation.com