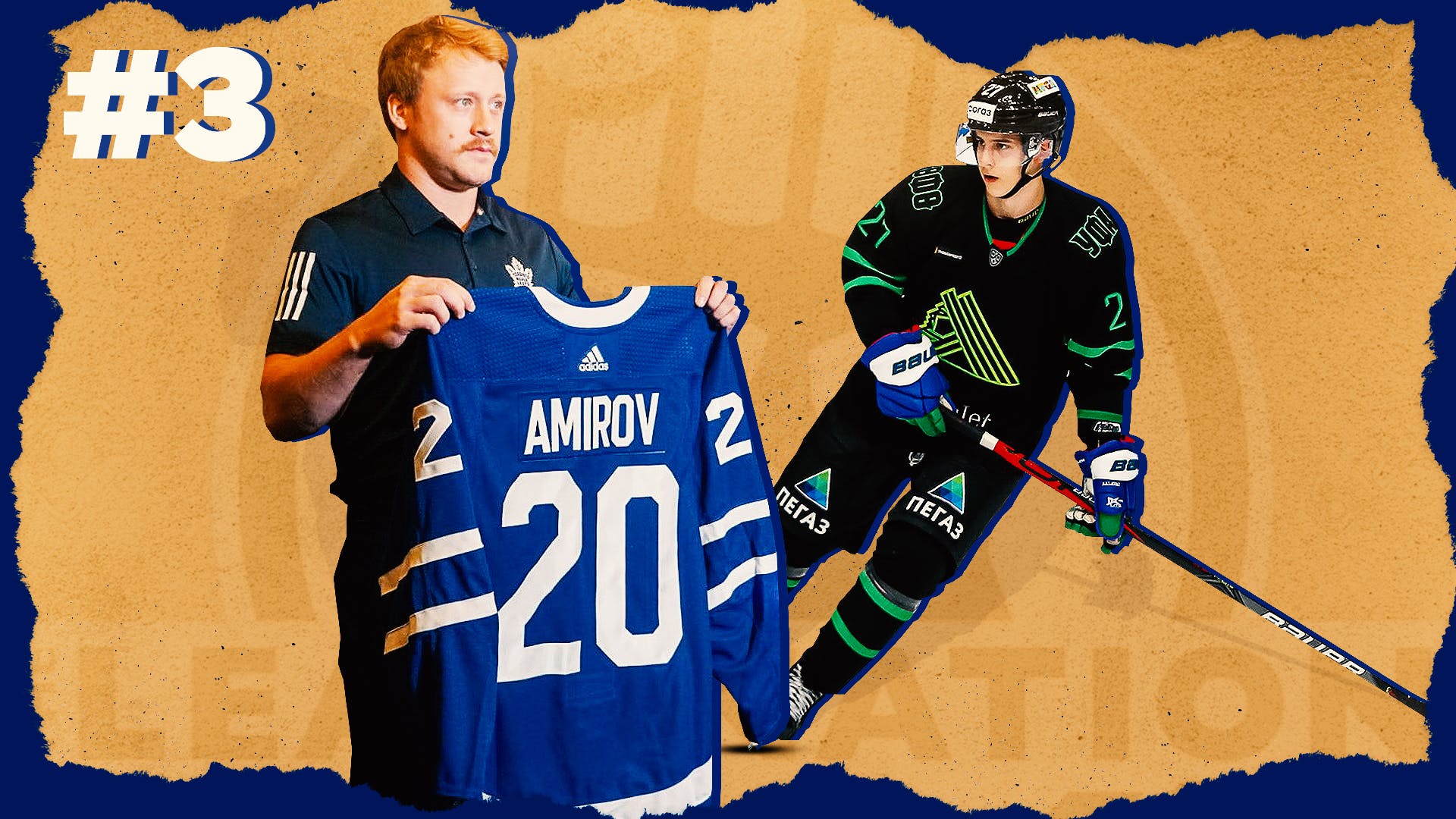 By Nick Richard
2 years ago
Comments
The Leafs entered this offseason with a prospect cupboard that was beginning to look rather bare, and were without a first round pick for the second consecutive year. With the Leafs tight against the salary cap and in need of some retooling, Kyle Dubas struck while the iron was hot and made a deal with the Pittsburgh Penguins centered around Kasperi Kapanen. The Leafs acquired multiple assets for the speedy young winger, but the biggest piece coming back to Toronto was the 15th overall pick in the 2020 NHL draft.
There was plenty of speculation leading up to the draft regarding whether Toronto would trade the newly acquired pick for immediate help, or stand pat and add an exciting new prospect to their organization. Dubas took the decision down to the final moment and when the clock ran out, the Leafs announced the selection of Russian forward Rodion Amirov.
The Leafs’ most recent first round pick makes his debut on our list at number three and is the first prospect in our countdown to receive an “A” grade from TheLeafsNation’s team of voters, putting him in a tier above the rest of the names we’ve seen to this point in the series.
Position: LW/RW
Age: 19
Height: 6’0″
Weight: 168 pounds
Shoots: Left
Drafted: 2020 first round, 15th overall

What kind of player is he?

Amirov is a play driving winger who impacts the game with his high level skating, slick puck handling, and ability to see plays as they develop. While I’ve included his listed height and weight from eliteprospects.com, it is worth noting that both Kyle Dubas as well as Amirov’s agent said in the days following the draft that those measurements are out of date and Amirov is actually closer to 6’1″ and 185 pounds. That added strength has made a difference for him this season, as he has looked more capable and explosive in his second year facing KHL competition.
Advertisement
Ad
Advertisement
Ad
Another area of improvement in Amirov’s game as he continues to mature has been his shot. During his draft year, he received praise for his skating, vision, and overall hockey sense but many scouts considered his shot to be average or just slightly above. This season, he has shown an ability to finish more of the dangerous opportunities that he creates with his speed and vision. In the play below, Amirov recognizes the clean faceoff win and immediately activates from the weak side to support the breakout, getting into space behind the defender in the neutral zone. In one fluid motion, he turns to present himself as a passing option and corrals a difficult pass while maintaining speed as he gets turned back around and heads to the net. One quick look to sell the pass to his teammate and he wires a shot short side over the goaltender’s blocker.
Advertisement
Ad
Advertisement
Ad

Short side. Top corner. 19-year-old Rodion Amirov is not messing around. pic.twitter.com/MvMke66gcW

Amirov excels in the transition game, not only because of his speed, but because of his great lateral movement and agility. He can quickly change direction with great body control and strong edges while still being able to make a play with the puck. He has a knack for disrupting neutral zone coverages by drawing defenders in before cutting through space or making a pass to a teammate for a zone entry. In his first game at the Karjala Cup in November, Amirov wasted no time putting those abilities to use and got onto the scoreboard less than two minutes into the tournament. Watch as he sets up the defender the whole way, carrying the puck on his outside hip and taking a wide lane into the zone. The second that the defender turns to pivot and defend the wide drive, Amirov cuts on a dime back to the middle of the ice and has a clear shooting lane to beat the goaltender from the slot.
Advertisement
Ad
Advertisement
Ad

Not only does Amirov take the puck to high danger areas himself, but he is crafty passer who sets up his teammates in scoring areas with regularity. He is an effective passer in transition as well, with a good understanding of how to use his teammates to breakdown defensive coverages. Once he is in the offensive zone, Amirov has a great awareness and sense of what his options are when the puck comes to him. He has quick hands that allow him to change passing angles at the last second, and the processing speed to make plays under pressure.

The young winger has no shortage of projectable NHL tools but his greatest asset is his mobility. He has great straight line speed but his ability to quickly change direction and accelerate out of trouble areas makes him a difficult player to defend. Amirov is a very mechanically sound skater with a fluid but composed stride. He always seems in control of his movements and he centers his weight well, allowing him to change direction in the blink of an eye. The quickness with which he shifts the puck to the other side of his body on cutbacks like the one below, and the ability to open up his stance and still generate speed while eluding a check is fun to watch.
Advertisement
Ad
Advertisement
Ad

He is a fantastic puck handler as well, and he uses his feet to set up defenders on the rush before making a slick move to get around them. Amirov carries the puck with his head up, scanning the ice for space and passing options, and can handle the puck in tight to his body to elude stick checks.

Rodion Amirov is fun to watch.
First he undresses Dillon Heatherington and then finishes his shift off with a solid hit on him. pic.twitter.com/B3PI7DoN0H

Amirov is an exciting offensive player but his understanding of the game and his spatial awareness make him an effective player on the other side of the puck, too. He tracks the play well on the back check and is disruptive in defensive transition, able to quickly turn play back the other way for an offensive chance after a turnover. He is not an overly physical player but he engages in puck battles and positions his body well to use his hands to come away with contested pucks. Overall, Amirov is a well rounded offensive threat who can play on both special teams units and drive play with a strong transition game.
Advertisement
Ad
Advertisement
Ad

Amirov put himself on the map in his draft-1 year scoring 22 points in just nine games in the Russian U18 league, before finishing off the season with 26 points in 31 MHL games. His breakout performance, however, came at the U18 World Championships where he led the Russian team in scoring and was the top scoring draft-1 player in the tournament, finishing just ahead of 2020 fourth overall pick Lucas Raymond with six goals and three assists in seven games.
Advertisement
Ad
Advertisement
Ad
Some of the draft’s more casual observers were alarmed when the broadcast flashed Amirov’s stat line of just two assists in 21 KHL games onto the screen after the Leafs selected him 15th overall, but those numbers were not an accurate representation of Amirov as a prospect. Just to be playing KHL games, even in a limited role, as a first year draft eligible player is a feat in itself but his performance at Russia’s lower levels is what earned him that opportunity. He began his draft year playing for Tolpar Ufa in the MHL, Russia’s U20 league, and put up an impressive 22 points in 17 games before being called up to the VHL for a five game stint in which he registered three points. Though he had performed well enough to earn a spot on the KHL roster, he was used sparingly and his offensive production suffered as a result.
This season, Amirov’s role with Ufa’s KHL squad has been a bit up and down. He played big minutes in the early part of the season when Ufa was missing a number of players due to various health related issues, and quickly exceeded his point totals from his first KHL stint. As the team got healthier, Amirov’s ice time decreased and the offense dried up but he returned to Ufa’s lineup with two goals in four games after a strong showing at the Karjala Cup. Representing Russia as part of the only U20 team in the tournament, Amirov led the way with a goal in each of their three games and was named the tournament’s best forward as Russia went undefeated to claim the title.
Advertisement
Ad
Advertisement
Ad

What’s next for Amirov?

Amirov is currently away from his KHL team as he has joined Russia’s national junior camp in preparation for the upcoming World Juniors. Much like at the Karjala Cup, he will be relied upon as a key player at the top of Russia’s lineup and could be one of the tournament’s offensive stars.
Amirov will look to have a strong showing at the WJC that he can carry into the stretch drive of the KHL season and it appears there may be a larger role waiting for him upon his return as Ufa traded away former Maple Leaf Nikita Soshnikov last week. Following the draft, it was said that the plan was for Amirov to finish of the season in Russia and that he, in conjunction with the Leafs organization, would assess his options in the offseason but reports recently surfaced that Ufa has been discussing a two-year contract extension with the Leafs prospect.
Advertisement
Ad
Advertisement
Ad
Though no contract has been signed yet, it should come as no surprise if the Leafs and Amirov’s camp decide that it’s best for him to remain in Russia for at least next season. Though he has the potential to be a fixture in Toronto’s top six forward group someday, he is still a developing prospect and playing against KHL competition will serve him well on his path to the NHL. It might be a couple of years before he dons the Maple Leaf but Amirov has the potential to be a seamless addition to the top of the Maple Leafs lineup once he arrives.

Amirov #LeafsForever thanks his parents for their investment in him throughout his childhood. He didn’t sleep and watched the draft with his whole family. Says he is very proud to be with such a historic organization as Toronto and “won’t let them down.” https://t.co/5ycg9pKqfk