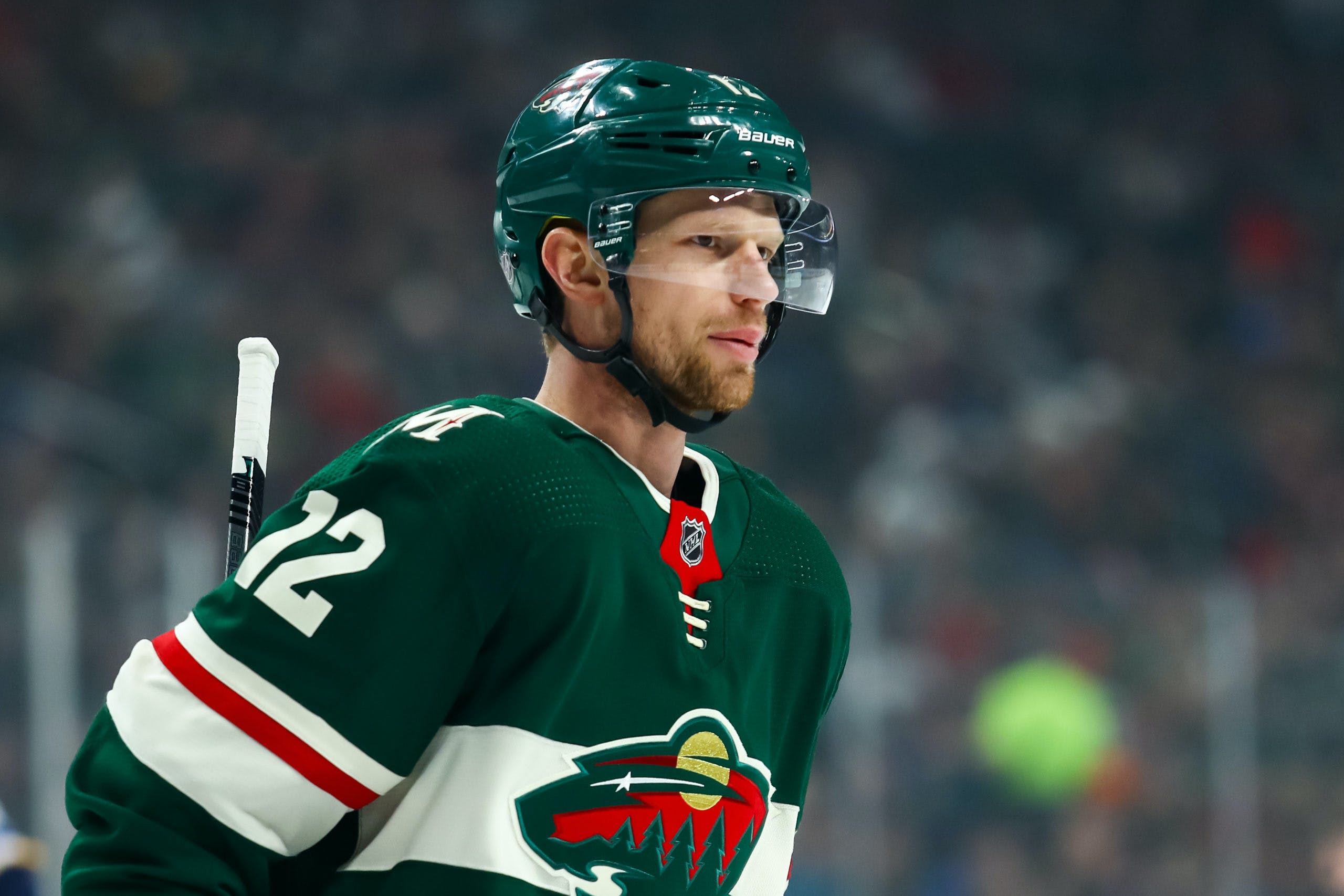 Photo credit: © David Berding-USA TODAY Sports
By Nick Richard
1 year ago
Comments
The upcoming Olympic Games in Beijing won’t feature NHL players but that doesn’t mean that Team Canada, led by former NHL star Eric Staal, will be short on NHL experience. Staal, a former Olympic gold medal winner and member of the Triple Gold Club, leads the way with over 1000 points in almost 1300 games of NHL experience and will be looked to as a leader on a team that features a unique mix of talent.
Staal last played in the NHL with the Montreal Canadiens during their run to the 2021 Stanley Cup Final and though he was relegated to more of a supporting role during his last couple of NHL seasons, he isn’t far removed from being a productive NHLer. He put up 47 points in 66 games with Minnesota during the 2019-20 season and figures to be an offensive catalyst for the Canadian squad.

“I have so many fond memories of competing at the 2010 Olympics in Vancouver and winning a gold medal on home ice, and I am honoured to once again be nominated for the 2022 Games in Beijing. The Olympics are the pinnacle of sport, and I know our entire team is grateful for the opportunity to compete for a gold medal in Beijing and be a part of Team Canada.”
– Eric Staal, via HockeyCanada.ca

Devon Levi | Northeastern | NCAA
Edward Pasquale | Lokomotiv Yaroslavl | KHL
Matt Tomkins | Frölunda | SHL
The roster features 12 forwards who have some degree of NHL experience, including 2021 third overall pick @Mason McTavish who played nine games earlier this season before Anaheim sent him back to junior where he has looked dominant every night. McTavish brings a youthful blend of power and skill that could make him an X-factor for the Canadian squad. Everyone saw what he was capable of against the best players in his peer group at the abbreviated World Juniors, and having spent his draft year playing in the top Swiss professional league, he won’t be overwhelmed by the quality of competition.
Advertisement
Ad
Advertisement
Ad

The #WorldJuniors have started and Mason McTavish is NOT fooling around 😲 pic.twitter.com/bT3zlr17kj

Corban Knight, drafted in 2009 by the Florida Panthers, has been a solid producer in the KHL for the last few seasons and is enjoying a breakout year for Omsk with 48 points in 47 games. He should play a prominent offensive role during the tournament and his wealth of pro experience will likely make him a trusted option for head coach Claude Julien.
Other notable names up front include David Desharnais, who spent seven seasons with the Montreal Canadiens, and Daniel Winnik who suited up for 114 games in Blue and White during two separate tours with the Leafs.
The only forwards on the main roster who haven’t played in the NHL at some point are journeyman pro Adam Tambellini and Minnesota Wild prospect Jack McBain who currently leads Boston College in scoring with 24 points through 18 games on the season. Eric O’Dell, who spent parts of two seasons with the Winnipeg Jets, is the lone returning forward from Canada’s 2018 silver medal-winning Olympic team.
Advertisement
Ad
Advertisement
Ad
The most interesting name among the forward group for Leafs fans will surely be Josh Ho-Sang. After a tumultuous tenure with the New York Islanders to begin his career, the 26-year-old has been working tirelessly to get back on track with the Marlies this season. Invited to Leafs training camp on a PTO, Ho-Sang showed well in the preseason and earned an AHL contract. His production has slowed down a bit after a blazing start to the season but he has consistently been one of the most dynamic offensive players in the AHL this year and a strong showing on the Olympic stage could bring him closer to an NHL deal with the Leafs.

Ho-Sang on whether the Olympics will help get him back to the NHL: "That's not my focus … I'm thinking about the group of men who have come here and the job we want to do." #Leafs #Marlies

Advertisement
Ad
Advertisement
Ad
The blue line features experienced NHLers like Jason Demers and Mark Barberio, as well as returnees from the 2018 team in Maxim Noreau and Mat Robinson, but the group is headlined by 2021 first overall pick Owen Power. Bucking the trend of first overall picks heading straight to the NHL, Power opted to return to Michigan for his sophomore season and that decision has ultimately afforded him the opportunity to represent his country at the Olympics. The 6’6″, 214 pound defender has been a force for the Wolverines this year, playing huge minutes and leading all NCAA defencemen in scoring with 26 points through 24 games. His performance for Canada’s gold medal-winning team at last year’s World Championships as an 18-year-old, along with his dominant showing in a shortened World Juniors earlier this season, made his inclusion on this roster a no-brainer.

As it likely would have been with NHLers participating, the biggest questions on Canada’s roster are between the pipes. Eddie Pasquale’s three games for Tampa Bay back in 2018-19 account for the entirety of the trio’s NHL experience and though he likely has the inside track on the starting job, he will be pushed by Buffalo Sabres prospect Devon Levi and former Blackhawks prospect Matt Tomkins.
Advertisement
Ad
Advertisement
Ad
Originally drafted by the Florida Panthers, Levi has ascended up the goaltending prospect ranks in the last two seasons. He was named the top goaltender at last year’s World Juniors, winning a silver medal, and has been the best goaltender in the NCAA this season, sporting a ridiculous .948 save percentage in 24 games for Northeastern University. Tomkins has spent the last few seasons in the AHL playing for Chicago’s minor league affiliate but made the jump to the SHL this season where he has put up solid numbers for Frölunda. Goaltending can make or break a team in a short tournament like this and Canada will need one of these netminders to grab hold of the job early on.
In addition to the 25 players named to the main roster, Hockey Canada will also be bringing six alternates to the tournament, including a few with ties to the Leafs. Justin Pogge, the former goaltender of the future in Toronto, has been playing in the top German pro league for the last three seasons after a few strong seasons in the SHL, Chris DiDomenico was drafted by the Leafs in 2007 and played 27 games for the Ottawa Senators, while Max Véronneau got into a handful of games with the Marlies after being acquired from the Senators in 2019-20.
Advertisement
Ad
Advertisement
Ad
The most notable name among the alternates is 2021 fifth overall pick Kent Johnson, a teammate of Owen Power’s at the University of Michigan. You could make the argument that he has more raw offensive skill than anyone included on the main roster and he could be one of the stories of the tournament if Canada suffers an injury or two up front.

It may not be the tournament we were all expecting a few months ago but there are still plenty of compelling names and storylines to watch for, not only on the Canadian roster but in the tournament itself. Even without NHLers playing this time around, Canada’s forward group looks a lot more formidable than in 2018 with the likes of Staal, Desharnais, McTavish, Ho-Sang, McBain, and Knight. Though he is still just 19 years of age, Owen Power could also prove to be the kind of game-changer on the back end that the Canadian roster was lacking in the last Olympic tournament.
Advertisement
Ad
Advertisement
Ad
Canada is always a favorite to win gold, with or without NHL players, and you can bet that this group made up of young and old will take pride in their pursuit to bring their country back to the top of the Olympic podium.
(Statistics from EliteProspects.com)