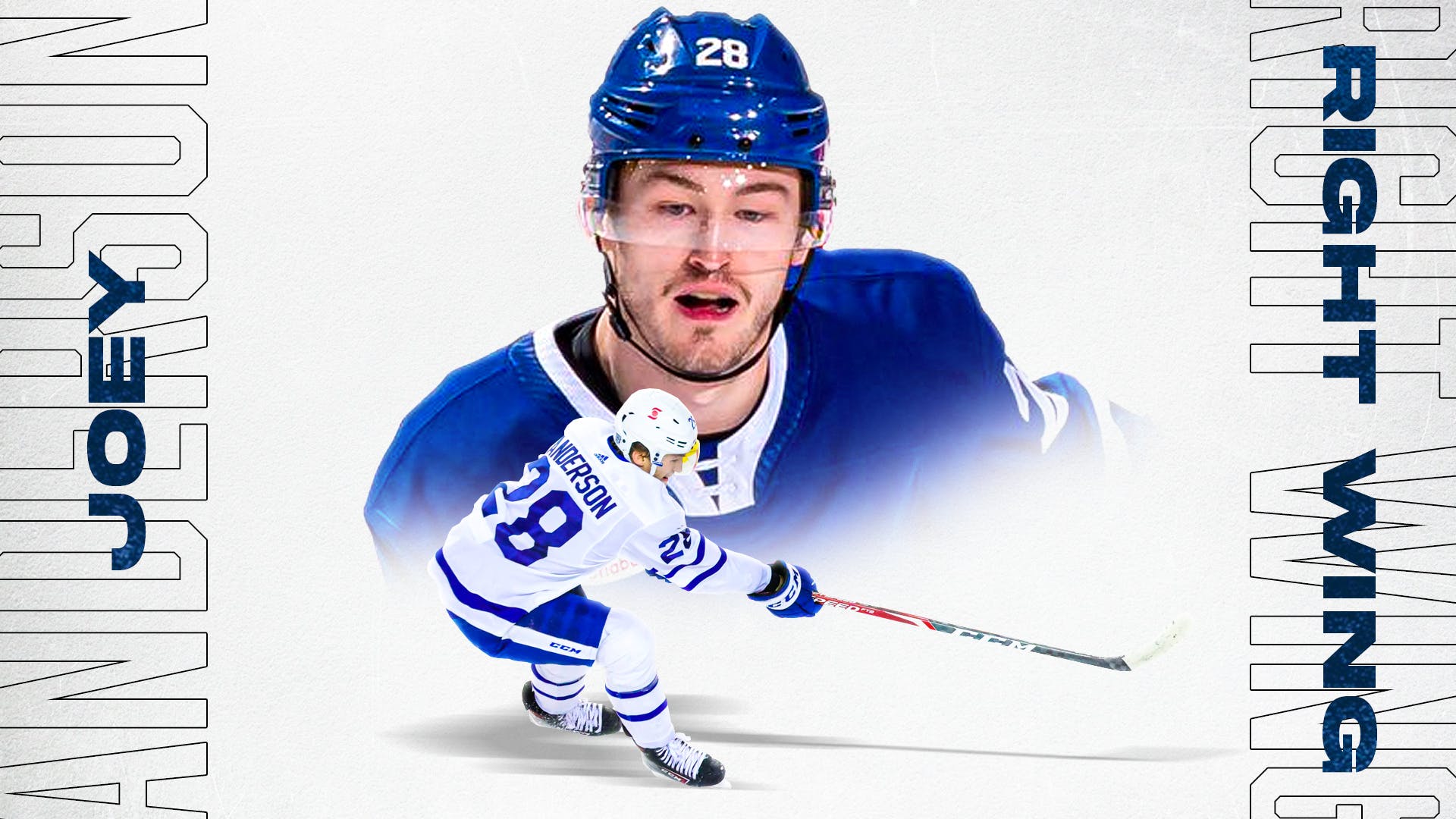 Photo credit: Nick Barden
By Kyle Cushman
1 year ago
Comments
@Joey Anderson is a strange player in the Toronto Maple Leafs prospect pool.
Usually, players that have 53 games of NHL experience aren’t put into the “prospect” category. Anderson is somewhat of an exception, though, having played most of the past two seasons in the AHL and still being only 23 years of age. The yo-yo type career Anderson has had since turning pro combined with a lacklustre stat line from last season make him a tricky player to rank, evident in the fact he drops from #7 in our previous rankings to #11 this time around.
Still, Joey Anderson is right on the edge of the NHL. His 2020/21 campaign raised more questions than it did provide answers, and this upcoming season for Anderson is a pivotal one for his career.
Position: Right Wing
Age: 23
Height: 5’11
Weight: 190 lbs
Drafted: 73rd Overall, 2016 NHL Draft by New Jersey
Advertisement
Ad
Advertisement
Ad
2020-21 Team: Toronto Marlies, AHL (1 GP with the Maple Leafs)
2020 Prospect Ranking: #7
Anderson is the first player on our prospect rankings that was not acquired via the draft or as an undrafted free agent. Rather, Anderson was brought in last offseason in a one-for-one swap deal, with @Andreas Johnsson heading to the New Jersey Devils.
Given reports that the Leafs had offers of a second-round pick for Johnsson, or could have had @Mackenzie Weegar for Johnsson plus @Travis Dermott, the reaction to Anderson’s acquisition was underwhelming. With those rumours, the decision to move Johnsson for Anderson showed that the Leafs management team had a lot of belief in Anderson’s ability.
Anderson began the 2018/19 season in the AHL, his first professional season. He scored five points in eight games before being called up to the New Jersey Devils. In retrospect, this was a poor decision. Anderson spent most of the remaining season in a depth role with New Jersey, finishing that season with seven points in 34 NHL games (12:54 TOI/GP) and six points in 13 AHL games. Looking back, it would have been much better for Anderson’s development had he stayed the entire season in the AHL. The increased ice-time and consistency would have made a transition to the NHL in 2019/20 a much easier task.
Advertisement
Ad
Advertisement
Ad
Instead, Anderson began that 2019/20 season in the AHL, which was the correct decision after how things went the previous season. He started the year on a four-game point streak, remaining in the AHL for 44 games. The Devils allowed Anderson to become a top-end performer in the AHL, scoring 15 goals and 34 points in that time, before they brought him back up to the NHL roster.
His results upon being called up were significantly improved. In 18 games at the end of the 2019/20 season, Anderson scored six points, one shy of his total in 34 games the previous season. Still only 22, signs were pointing towards Anderson grabbing a top nine position in the Devils lineup and beginning to cement his place as an NHL player.

Have no fear, Joey Anderson has a goal right here 👇 😎 @NJDevils | #NJDevils pic.twitter.com/WMfjhPpz0R

Then he’s traded to Toronto. With the Leafs amount of depth options and Anderson’s status not requiring waivers, it was going to be very difficult for him to make Toronto’s roster in 2020. The expectation was that he could provide depth in case of injury, go down with the Marlies, and dominate.
Advertisement
Ad
Advertisement
Ad
Things didn’t go that way. Outside of one game on the fourth line with the Leafs, Anderson spent the entire year with the Marlies. He appeared in just 20 AHL games as well, missing a bulk of the final stretch due to an undisclosed injury believed to be head-related. Anderson showed flashes, but a final stat line of 11 points in 20 games was disappointing for a 22-year old that was anticipated to be closer to a top-nine NHLer than an AHL player.
That said, I’m willing to push his small sample with the Marlies to the side. Simply put, the Marlies were a bit of a disaster last season. From numerous injuries to a COVID break and more, the Marlies were in a situation where about nothing went right. Lineups consisting of just four or five NHL contracted players were common by the end of the season.
Advertisement
Ad
Advertisement
Ad
When Anderson was healthy, he showed flashes of the talent that can make him a top-nine NHL contributor. Anderson has strong offensive tools, specifically his wrist shot. He’s not afraid to mix it up in the corners and work for space in front of the net.

Nice shot from Joey Anderson on his second of the year.

He's easily been one of the better Marlies forwards early in the season. pic.twitter.com/38qnqsPRba

He was also relied heavily on special teams, performing very well in the bumper role on the top powerplay unit.

Joey Anderson has been quite good in the bumper spot on AHL TOR's power play. Love his quick hands/ability to play in traffic. #LeafsForever https://t.co/t1wwOn4Kmd pic.twitter.com/3PsFuRhobY

Anderson also showed an ability to create offensive chances while shorthanded, scoring a couple of nice goals on the penalty kill prior to his injury.

Anderson’s position for next season should be straightforward, but it’s anything but. As the Devils had him in the NHL so early, Anderson will require waivers to be sent down beginning this season. His international results with the USA combined with his intriguing AHL numbers make him an easy waiver claim target. Currently, Toronto can only afford one extra skater under the cap as well, making it especially difficult to see where Anderson fits in as the roster is currently constructed.
Advertisement
Ad
Advertisement
Ad
That being said, I still really like the characteristics that Anderson brings. Signed for another two seasons at league minimum, I like Anderson as a bottom-six winger that can contribute offensively, work hard in the corners, and can play on both special teams. His results at the NHL level haven’t been spectacular, but his 18 game stint at the end of the 2019/20 season shows a lot of the promise the Leafs bet on when trading Andreas Johnsson for him.

The lack of dominance shown by Anderson last year with the Marlies leaves his place going into next season much more unclear than it should’ve been. As currently constructed, it’s difficult to see where he fits in. Ideally, he passes through waivers and he can find his rhythm again with the Marlies, but I have a difficult time seeing all 31 other teams passing on him for free.
Advertisement
Ad
Advertisement
Ad
If he does make the Leafs roster, I’d like to see what he could do on the Leafs projected checking line. It’s unreasonable to expect @Ondrej Kase to play every game. When he’s unavailable/resting, a line featuring @Ilya Mikheyev, @David Kampf, and Anderson isn’t sexy but would be tough to play against. Anderson would be able to chip in offensively in that position and mix in on special teams as needed.
Overall, Joey Anderson is probably the trickiest player to rank on this year’s edition of the Leafs prospect rankings. Usually prospects as close to the NHL as he is rank higher, but his lacklustre partial season with the Marlies sees him drop down the ranking to #11. I believe in Anderson’s talent still, but requiring waivers for the first time in his career and with multiple other cheap, depth pieces to compete against in training camp, it’s shaping up to be a make or break September for Anderson’s future in the Leafs organization.
Advertisement
Ad
Advertisement
Ad