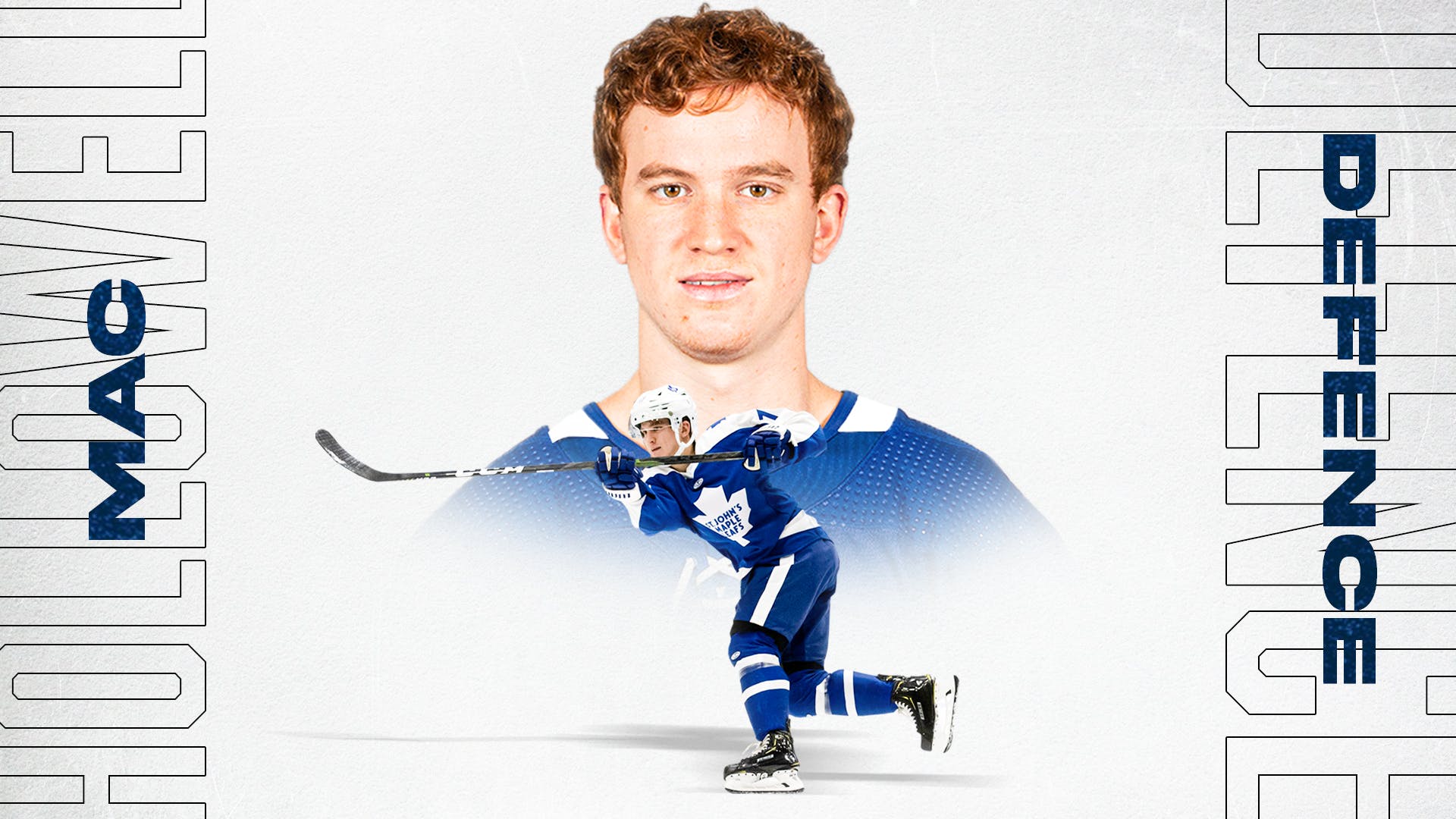 Photo credit: Nick Barden
By Filipe Dimas
1 year ago
Comments
Mac Hollowell has all the makings of a fan favourite. He’s a local boy, puts up a ton of points, isn’t afraid to drop the gloves once in a while, and plays the coveted RD position. His 5’10 frame may have been mocked when the Leafs selected him in the 4th round of the 2018 draft, but with another right handed defenceman under 6’ tall having just won the Norris, more and more people are beginning to warm themselves up to this flashy blueliner.
Despite his smaller size, he knows how to throw around the body, positions well on defence, and has some of the best offensive instincts from any blueliner in the Leafs organization. Defensive prospects can be hard to project, which is why Hollowell remains in the #13 spot just like he was last year, but with some ranking him as high as 6th best prospect in the organization, it seems like it’s only a matter of time until more people realize what an excellent two-way threat he is.
Advertisement
Ad
Advertisement
Ad
Position: RD
Age: 22
Height: 5’10
Weight: 170 lbs
Drafted: 2018 4th round, 118th overall
2020-2021 Team: TUTO Hockey (Mestis) & Toronto Marlies (AHL)
2020 Prospect Ranking: 13th
Don’t let his height starting with a 5 fool you, Mac Hollowell plays with snarl and grit. He’s fought in the OHL, ECHL, and AHL while laying down plenty of monster hits against guys much larger than he is.

His physical game isn’t the reason that Leafs fans are quickly growing to love the Niagara Falls native however, on top of being talented in his own end he has moments of true wizardry in the offensive zone and may have some of the best offensive instincts of any blueliner in the entire Maple Leafs organization.
Advertisement
Ad
Advertisement
Ad

Here's the pair of goals that Mac Hollowell scored yesterday for TUTO in Mestis. His offensive instincts are undeniable. #Leafs pic.twitter.com/vLo0ssQPBc

After being drafted by the Maple Leafs in 2018, Mac Hollowell returned to the Soo Greyhounds and put up an unbelievable 77 points in 64 games while providing leadership as an alternate captain for the OHL franchise. That talent continued at the pro level when during his first year of professional hockey he scored a respectable 25 combined points in 53 games while splitting time between the Growlers and Marlies.
Hollowell was briefly loaned to TUTO hockey in the second division of the Finnish league where he put up six points in as many games before returning to the Marlies where he spent most of the season on the second pairing and quarterbacking the second powerplay unit.
Advertisement
Ad
Advertisement
Ad
More than just an asset on the ice, it’s seeming like Mac Hollowell is becoming an asset off the ice as well. Leafs fans may remember seeing the young defenceman becoming quick pals with veteran Joe Thronton and even quarantining with several of the Leafs highest profile players. Despite not playing a single game for the Maple Leafs, Hollowell has clearly formed some immediate chemistry with many of the club’s core players.

Joe Thornton on why he's taken a shine to Leafs prospect Mac Hollowell: "He's 20 years younger than me, but we have the same interests." pic.twitter.com/5251DjZySR

Advertisement
Ad
Advertisement
Ad
If there’s a weakness in Hollowell’s game it’s that his small size means he lacks reach and he must play closer to opponent’s when in the defensive end. This can lead to him sometimes getting beat by speeder forwards who take advantage of his tight marking by creating quick separation to get open for a quick pass or one-timer opportunity.
That being said, his defensive instincts are still strong and he can play well in a structured defensive system where his tight marking is used to put pressure on opposition players to make a quick play. When he gets the puck on his stick in the defensive zone his controlled exits are as smooth as they get, not afraid to take his time with the puck and having the elite awareness necessary to cleanly misdirect opposing forwards and bring the puck up ice.
Advertisement
Ad
Advertisement
Ad

A great example of using the net as a shield from Mac Hollowell. Once he receives the puck, Hollowell slows down to attract F1 behind the net, then beat him cleanly by cutting the post to create separation. Simple, but important detail for efficiency on the breakout. pic.twitter.com/8pAesNeMvF

Hollowell has quickly shown he has the tools necessary to become an NHL regular, and has even shown flashes of potential star power since getting drafted in 2018. Between being an offensive wizard, cool and collected on defence, and having seemingly instant chemistry everywhere he goes it could be sooner than anyone expects before the Mac-Daddy is playing for the Maple Leafs.

Mac Hollowell is one of the many 'under the radar' high probability NHLers that makes the Maple Leafs prospect system so rich. Filip Kral is another one. https://t.co/XeFlmAnHuD pic.twitter.com/bQDn3GhZM0

Advertisement
Ad
Advertisement
Ad
What’s Next for Hollowell?
With many expecting Rasmus Sandin and Timothy Liljegren to permanently graduate to the Maple Leafs roster this coming season, it seems Mac Hollowell will get a chance to show he can be a top pairing defenceman for the Marlies while manning their first powerplay unit. Should injuries or poor blueline play damper the Leafs season, it’s extremely likely that Hollowell gets his first action in an NHL game at some point during the 2021-2022 season.
Before getting promoted to the role of Maple Leafs head coach, Sheldon Keefe has worked with Mac Hollowell on the Marlies, and briefly with the Soo Greyhounds. He’s seen the talented blueliner at several levels and knows what he’s capable of.
“He found a way to make complicated situations look simple, which is really what you’re looking for, so that was really good for him. And defensively, he was really good with his gaps and didn’t hurt us at all. It was very encouraging, and that’s why we’ve remained confident in playing him,” Keefe said of the at-the-time AHL rookie Hollowell after contributing to a first round playoff sweep of the Rochester Americans.
Advertisement
Ad
Advertisement
Ad
Hollowell’s ability to handle stressful situations whether it’s exiting the defensive zone, aiming a powerplay one-timer, battling through playoff hockey, or sitting next to future Hall of Famer Joe Thronton on the team plane shows he has the mental fortitude to succeed at any level. No matter what new challenges he faces, the 22 year old makes it seem like he’s been there thousands of times before. This year will be his biggest challenge yet, showcasing whether he can handle being the go-to guy for the Marlies and potentially getting his first taste of NHL action where the fanbase who has spent many years eager for a talented right-handed defenceman will be expecting big things from the young blueliner.
Just don’t act too surprised when he looks like he’s been there before.
Advertisement
Ad
Advertisement
Ad