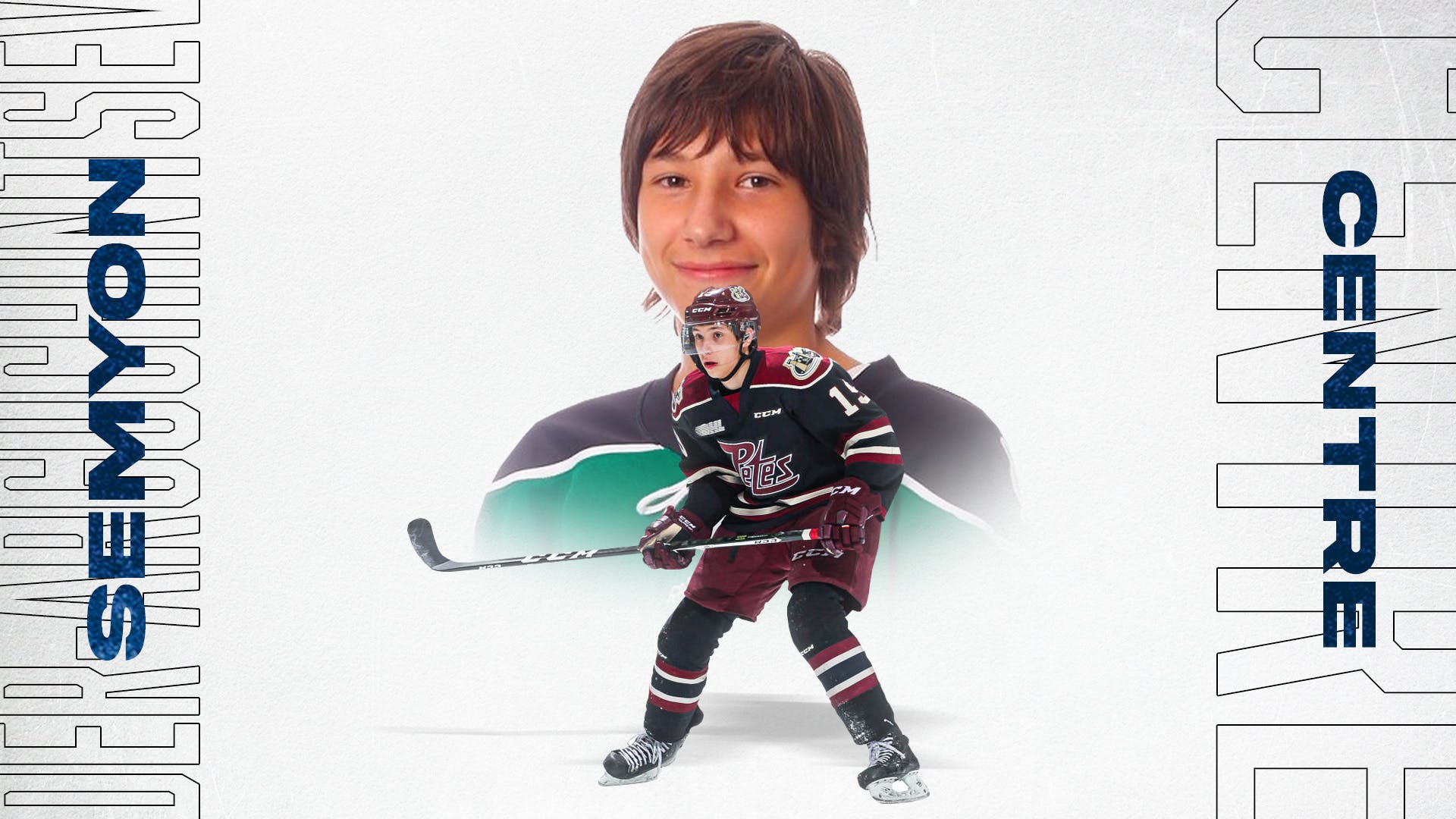 Photo credit: Nick Barden
By Kyle Cushman
1 year ago
Comments
Coming into the 2020/21 season, @Semyon Der-Arguchintsev had a lot to prove in regards to his legitimacy as an NHL prospect.
His Draft+1 season in 2018/19 was disappointing as he stagnated offensively but found his groove again the following year. Questions were yet to be answered about his skillset and whether he would be able to translate to the next level as he entered his first season of professional hockey.
While we didn’t get the sample size we may have wanted, as his season was impeded by the AHL’s delayed start and an injury suffered while on loan in the KHL, we did see a glimpse of Der-Arguchintsev’s capabilities at the professional level this past season. The limited sample has still resulted in Der-Arguchintsev dropping slightly down the rankings, but his 2020/21 campaign showed promising signs that could have him shooting back up the list in a year’s time.
Position: Centre
Age: 20 (will be 21 when the 2021/22 season begins)
Advertisement
Ad
Advertisement
Ad
Height: 5’11
Weight: 170 lbs
Drafted: 76th Overall, 2018 NHL Draft by Toronto
2020-21 Team: Torpedo Nizhny Novgorod, KHL & Toronto Marlies, AHL
2020 Prospect Ranking: #14
Semyon Der-Arguchintsev style made his transition to the professional game this past year so interesting to watch. His vision and transitional ability at the OHL level was fantastic, but his reluctance to shoot combined with his smaller stature naturally resulted in serious questions about his ability to convert that junior success to the professional level.
In his final OHL season, Der-Arguchintsev averaged just 2.12 shots on goal per game. That ranked 115th among 274 OHL forwards that appeared in 15 or more games in that 2019/20 season, a rank that would certainly drop even more if sorted by per 60 rates (which we don’t have available from the OHL).
Advertisement
Ad
Advertisement
Ad
Scheduled to play for the Toronto Marlies this past season, the delayed start to the AHL gave Der-Arguchintsev the opportunity to go on loan to Torpedo Nizhny Novgorod in the KHL. He would be in a position where his ice-time would have to be earned, playing for a team that’s priority was making the playoffs, not his development.
He made his KHL debut at the end of October, playing just 7:48 but scoring a goal off of a rebound in tight. After debuting as their fourth-line centre, Der-Arguchintsev’s early success saw him quickly rise up Torpedo’s lineup, shifting to the right wing in their top six. In fact, he enjoyed a four-game point streak during November, before having his promising start interrupted due to injury.

SDA has transitioned to the KHL without much of a problem. He's now getting second-line minutes in the second-best league in the world and has been creating chances for Torpedo. Promising signs as SDA turns pro. pic.twitter.com/G6RPxnw2MG

The injury forced him out of the lineup from the end of November to the beginning of February, where he again scored in his first game back. That would be the last point of his KHL tenure, as Der-Arguchintsev would go pointless in his final six regular-season games and four playoff games.
Advertisement
Ad
Advertisement
Ad
Overall, Der-Arguchintsev’s KHL time was positive. He showed that his elusiveness, vision, and transitional play could translate to high-level professional hockey. That said, his lack of shots on goal continued, registering just 29 shots in 17 regular-season games (1.7 per game). This was with 14:29 TOI per game as well, so it’s not like Der-Arguchintsev wasn’t receiving the ice-time to get those potential shots on net either.
This is the biggest concern with Der-Arguchintsev’s game. His extreme reluctance to shoot at times limits how much of his potential he could reach and is clearly the biggest thing he needs to work on. It’s not even like his shot is horrendous!

Semyon Der-Arguchintsev comes this close to ending Game 1 between Torpedo and Ak Bars in overtime: pic.twitter.com/NoG4jwQy58

The good in Der-Arguchintsev is his elusiveness in transition combined with his vision and playmaking. He’s able to gain the offensive zone and recognize the best possible passing lanes, completing them with strong, tape to tape passes. It’s been his calling card since his draft year. He racked up 163 assists in the OHL over 248 games, but with just 38 goals.
Advertisement
Ad
Advertisement
Ad
My favourite moments from Der-Arguchintsev are when he mixes deception with his passing ability. Check out his first career AHL point, on the powerplay as he gets the defender and goaltender to overcommit by framing up to shoot before passing to @Adam Brooks in the slot.

Der-Arguchintsev needs to incorporate a shooting threat into his game to make the rest of his playmaking even more effective. If opposing defences know he’ll do things like this next clip, it will be too easy for them to back off and cover the passing lanes.

Semyon Der-Arguchintsev does not believe in shooting the puck. pic.twitter.com/CCyYdAkWkf

Now, the above clip is an extreme example, but it illustrates the mindset Der-Arguchintsev has. Far too often, shooting is the last thing that Der-Arguchintsev wants to do. There were times during his KHL time where it looked like he was becoming more willing to shoot the puck, but then during his short stint with the Marlies, we saw things like the above.
Advertisement
Ad
Advertisement
Ad
Speaking of, Der-Arguchintsev’s time with the Marlies was very similar to how his time with Torpedo went. He came out of the gate hot, scoring four assists in his first three games, before failing to find the scoresheet in his final three appearances for the Marlies.
Overall, Der-Arguchintsev’s first professional season had more positives than negatives. He was able to transition to the KHL and later the AHL without much issue and maintained his strong transitional and playmaking success. He also did so while playing centre for a majority of his games in 2020/21, though a move to the wing could still be in store.

Without a standout defensive game, Der-Arguchintsev needs to be an offensive driver if he’s going to make the NHL. And to do this, he needs to incorporate a shooting element into his game far more often to really become that offensive threat at the professional level. The question marks surrounding that offensive potential and a lower NHL likelihood than some of the other prospects ranked around him on this list are why Der-Arguchintsev comes in as low as he does on this year’s prospect rankings.
Advertisement
Ad
Advertisement
Ad
This upcoming full season with the Marlies will give us a lot of answers as to how legitimate of an NHL prospect Der-Arguchintsev is. While he could go out and rack up points, proving himself as a high-end offensive talent that can push for NHL minutes sooner rather than later, I can just as easily see him struggle at 5v5 and rely on the powerplay for scoring.
The Semyon Der-Arguchintsev Experience™ is fun, but also frustrating. His lower floor and legitimate stylistic concerns combine to see him drop two spots down the prospect rankings this year. Following a full year with the Marlies, it’s hard to see him remaining in this range next summer. Either Der-Arguchintsev will flash and rise back up multiple positions, or he’ll fall off the rankings completely given the depth of the Maple Leafs pool. Regardless of which direction it goes for Semyon Der-Arguchintsev in 2021/22, he will be one to keep an eye on this upcoming season.
Advertisement
Ad
Advertisement
Ad