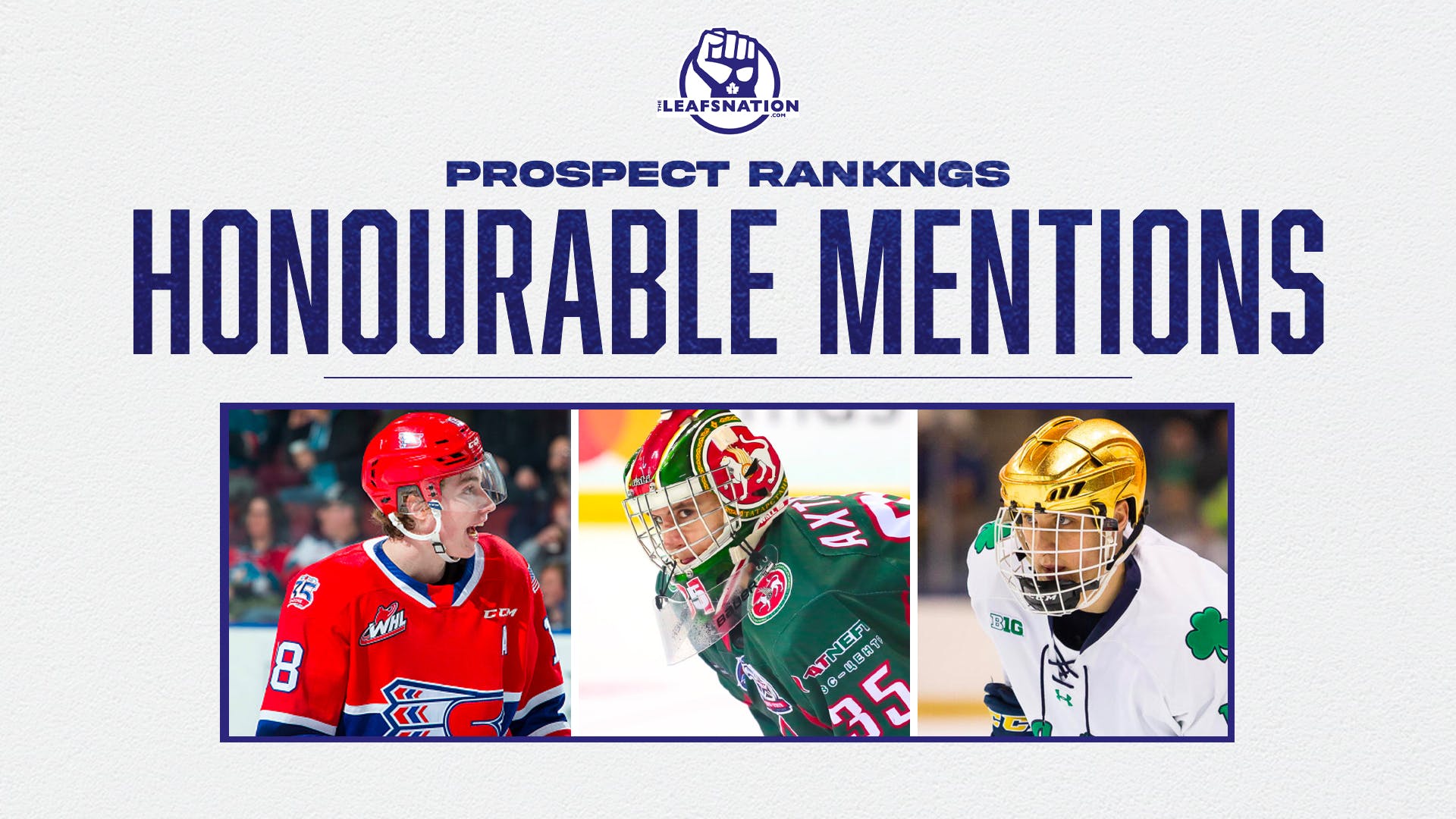 It’s that time of year again. The dog days of summer are here and it’s time to take stock of the Leafs’ prospect pipeline before we ramp up for another busy season. The votes have been tallied and the countdown gets underway for real on Monday but we kick off the series today by looking at a few players that just barely missed the cut.
The Leafs’ prospect system might not have much star potential but they have drafted well in recent years, adding a number of very good mid-level prospects to the organization. That is evident here as each of the players on this list of honourable mentions has had success at lower levels and they all possess legitimate NHL upside, too.

Position: LHD
Age: 21
Height: 6’1″
Weight: 176 lbs
Drafted: 2018, fifth round, 149th overall
Advertisement
Ad
Advertisement
Ad
2020-21 Team: Kometa Brno (Czech), Toronto Marlies (AHL)
2020 Prospect Ranking: 17
Král began last season in the second-tier Czech professional league, racking up 10 points in just seven games, before earning a call-up to the top Czech league. He got into 48 games with Kometa Brno, tallying 21 points, before returning to North America to join the Leafs’ American Hockey League affiliate. The 2018 fifth-round pick played 10 games with the Marlies to close out the campaign, potting a pair of goals while averaging just under 16 minutes of ice time per game, mostly at even strength.
Advertisement
Ad
Advertisement
Ad
Král is an intelligent two-way defender who is still working to adjust to the pace of the North American professional game. For the most part, he makes the correct reads but there are occasions where he is slow to react and he doesn’t have the skating ability to recover when the play gets behind him. His stride is inefficient and a bit clunky, but he mostly maintains solid positioning in the defensive zone while managing his gaps well in defensive transition. Král is an effective distributor with the puck on his stick, able to identify his options early and move play in a positive direction. He doesn’t hesitate to activate offensively, either, and does a good job of jumping into space off the rush or in the opposition’s end. From the point, his wrist shot is a weapon that he gets off quickly and he does well to find lanes to make sure it finds it’s way through traffic.

Filip Kral scores in two-straight games.#Marlies up 5-3 in the third period. pic.twitter.com/K2HRZIqBlH

Král’s upside is limited but he has the potential to grow into a bottom pairing defender at the NHL level in the coming years. Still without a full season of North American professional hockey under his belt, he will return to the Marlies in 2021-22 and will likely need at least a couple of AHL seasons before he is in consideration for an audition at the NHL level. Look for him to grab hold of a larger role with the Marlies this season.
Advertisement
Ad
Advertisement
Ad

Leafs take Filip Kral, yet another one of my favourites. Above-average offence and transition numbers. He was one of the very best NZ defenders I tracked all season — and he did it playing on his off side. pic.twitter.com/yF31TnOuaH

Position: G
Age: 19
Height: 6’1″
Weight: 157 lbs
Drafted: 2020, fourth round, 106th overall
2020-21 Team: Kazan (VHL, MHL, KHL)
2020 Prospect Ranking: 16
Akhtyamov had an impressive draft+1 season after being selected by the Leafs in the fourth round of the 2020 draft, especially considering how much he bounced around Kazan’s system over the course of the year. He saw action at all three levels, including three games in the KHL, but the bulk of his games were played for Kazan’s affiliates in the VHL and MHL where he put up outstanding numbers. Akhtyamov also made an appearance at the World Juniors but only got into a single game serving as 2020 first-rounder Yaroslav Askarov’s backup.
Advertisement
Ad
Advertisement
Ad
Akhtyamov did nothing to deserve dropping off of our list this year, but goaltenders can be difficult to evaluate or project and there were other depth prospects in the system that had strong seasons as well – never mind the fact that no one from last year’s list graduated and a couple of new prospects entered the organization. Another performance like the one he put up last season should erase any doubts and land him firmly inside our top 20 next year.
The young Russian netminder is a lot of fun to watch. He is ultra-competitive and more than willing to engage in post-whistle scrums or stand his ground when opposing forwards get too far into the blue paint.

Advertisement
Ad
Advertisement
Ad
Akhtyamov is a super athletic goaltender with outstanding reflexes and quickness in his movements. That serves him well in one-on-one situations as he is able to quickly adjust with the shooter and react to what they’re trying to do.

His aggressiveness carries over to his play in goal and he challenges shooters with what could occasionally be considered reckless abandon. He relies on his athleticism to be able to recover when he over-commits and comes up with some spectacular saves but he will have to continue to hone his technique as he develops.

Through four MHL playoff games with Irbis Kazan, Akhtyamov is 3-1-0 with a 1.76 GAA and .939 save percentage. pic.twitter.com/IUD8X7YBfO

Advertisement
Ad
Advertisement
Ad
Akhtyamov can be a little too active in his crease but he does well to battle and find pucks through traffic. He takes away the lower half of the net effectively but has a tendency to let his shoulders and glove hand drop when he enters the butterfly, leaving him vulnerable to shots up high. Akhtyamov is also a strong puck-handling goalie and can help his defenders out by cutting off dump-ins or making an accurate pass to get the breakout started.
Goaltenders can be difficult to get a handle on. Their development paths are typically longer and more volatile than the development paths of other players, but Akhtyamov has an impressive skill set and he has found success at every stop in his young career. He has been suiting up for KHL preseason action in recent days and he could earn time at Russia’s top-level but I expect him to see a solid run of games in the VHL this coming season. He has to continue to show progress in the Russian professional ranks over the next couple of seasons but the potential is there for Akhtyamov to develop into a quality NHL goaltender down the road.
Advertisement
Ad
Advertisement
Ad

“Akhtyamov uses a hybrid style that leans more towards the butterfly than the stand-up. He is not as active or fluid in his movements as Yaroslav Askarov, but he is equally as aggressive and wields an incredibly active stick.”
– Steve Kournianos (TheDraftAnalyst.com)

Position: C/W
Age: 21
Height: 5’11”
Weight: 185
Drafted: Undrafted
2020-21 Team: Notre Dame (NCAA)
2020 Prospect Ranking: New
Steeves finished off a three-year collegiate career at Notre Dame by leading the Fighting Irish in scoring with 15 goals and 17 assists for 32 points in 29 games. It was the second straight season that he led Notre Dame in scoring. The Leafs signed the New Hampshire native to a three-year entry level contract back in March and he will begin his pro career in 2021-22.
Steeves is a skilled puck handler that is able to manipulate space and evade defenders with crafty dekes. He is patient with the puck on his stick and can draw defenders in before dishing to a teammate or slipping by his check with a quick move.
Advertisement
Ad
Advertisement
Ad

.@steeves_alex notches his 14th goal of the season to finish off Michigan State. @NDHockey pic.twitter.com/WRX6mD9eUT

Steeves isn’t the most aesthetically pleasing skater but he has enough agility to slip by defenders in the offensive zone and he reads the play well to recognize soft spots in coverages, helping to mitigate some of his mobility issues. Becoming more explosive while cleaning up his stride technique will likely be an area of focus for Steeves and the Leafs’ player development staff.
The Notre Dame star made his name as an offense-first player in the NCAA and while he is willing to get involved defensively, he will have to continue to improve that part of his game in order to become a more complete player as he pushes for an NHL job. His offensive gifts helped him find success in college but he won’t be able to get by on those gifts alone at the pro level and learning to utilize his teammates more effectively will serve him well.
Advertisement
Ad
Advertisement
Ad

Here are some 2020/21 highlights from the newest #Leafs prospect, Alex Steeves

Tore it up with Notre Dame this year with 15 G, 32 PTS in 29 GP. Steeves was 2nd in the NCAA in primary even-strength points with 20, including 13 of his 15 goals. Nice addition to the organization pic.twitter.com/oWIkB2NFV6

Steeves could develop into a middle-six winger if everything falls into place but it is more likely that he tops out as a secondary scoring option in the bottom-six. The Leafs have added a whole lot of forward depth this offseason and Steeves will be in extremely tough to earn NHL minutes this season, let alone make the team out of camp. He will presumably play out the year with the Marlies and should inject some offensive firepower to what was a lackluster lineup last season. A strong rookie season in the AHL could put him on the NHL radar for the 2022-23 campaign.
Advertisement
Ad
Advertisement
Ad

“One of the first things that become evident when watching Steeves is that the combination of puck skill and creativity is quite high. There are moments in games when the New Hampshire native seems to have the puck on a string and he is teasing defenders by pulling the puck in and out, evading the defensive stick, and creating space for himself. “
– Tony Ferrari (The Hockey News, SI Now)